Teagasc Moorepark has quantified the potential of white clover to improve the sustainability of milk production. It poses a promising environmental impact mitigation measure for pasture-based dairy systems. Jonathan Herron and Donal O’Brien give more details

White clover (WC) grows well with perennial ryegrass under temperate Irish conditions. The legume enhances the quality of the sward 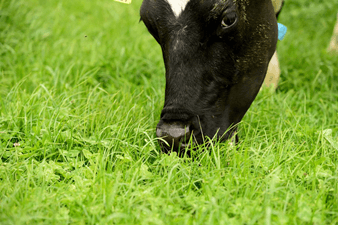 and the diet of grazing cattle. Research has shown that a sward with a WC content of 20% or more will have a positive effect on animal performance, and can increase the profitability of pasture-based dairy systems by 10%. In addition to sward and animal benefits, Teagasc’s Mitigation Abatement Cost Curve (MACC) analysis has identified the incorporation of WC into pastures as a greenhouse gas (GHG) mitigation measure. White clover has other environmental benefits too that tend to add value to farm habitats, but the legume is temperature sensitive with relatively low growth in spring. Swards relying entirely on WC as the nitrogen (N) source are sometimes deficient, resulting in lower yields than a grass only sward. The problem can be overcome through tight grazing and the application of low to moderate amounts of synthetic N fertiliser in spring.

Although fertilisers are required to replace the nutrients removed by harvested forages, the manufacture and application of synthetic fertilisers are significant contributors to the environmental footprint of agricultural products. Synthetic fertilisers have been reported as the principal source of nitrous oxide (N2O) emissions from pasture-based dairy systems, a potent GHG with a global warming potential (GWP) 265 times stronger than CO2 over a 100-year time horizon. Synthetic fertilisers can also potentially result in other environmental issues such as the nutrient enrichment of watercourses, ammonia (NH3) emissions, as well as the consumption of finite energy sources (NRE).

Rhizobia bacteria living in nodules on the roots of WC fixate nitrogen (N) from the atmosphere and release it into the soil making it available for plant growth. WC offers an alternative source of N to synthetic fertilisers for pasture-based systems. Furthermore, N derived from atmospheric fixation is considered as carbon and energy neutral, potentially replacing the energy and carbon intensive synthetic N fertilisers. WC thus poses a promising environmental impact mitigation measure for pasture-based dairy systems. 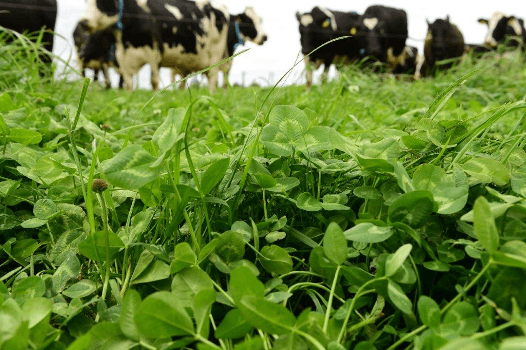 impact of three grass-based dairy farming systems: a grass-only sward receiving 250 kg N/ha per year (Gr250)  grass-clover swards receiving 250 or 150 kg N/ha per year (Cl250 and Cl150, respectively). Stocking rate was same across systems. The life cycle assessment showed that the Gr250 system had the lowest milk production and highest GHG, NH3 and NRE impact per tonne of fat and protein corrected milk (FPCM). The CL250 system produced the most milk, but had the greatest GHG, NH3 and NRE impact per ha. It also had the highest nutrient loss per ha and tonne FPCM, because of the additional N from WC fixation. The CL150 dairy system had the lowest environmental impact across all impacts and functional units.

Overall, it can be concluded that the substitution of synthetic N fertiliser with N fixed by WC not only reduces the environmental impact of intensive pasture-based dairy systems by improving animal performance, but also from the reduction in total emissions and pollutants. The latter will be critical to help the sector meet future emission reduction targets.