The European Union (EU) has introduced a number of directives aimed at improving water quality, such as the Nitrates Directive (ND) (91/676/EEC) and Water Framework Directive (WFD) (2000/60/EC). The WFD set out to achieve 'good status' in surface waters by2027 at the latest but also aims to ensure that there is no decrease in quality. Nitrogen and phosphorus losses from agriculture have attracted considerable attention. In Ireland, water quality had stabilised and began to improve over the last few decades.

However, the Environmental Protection Agency (EPA) water quality report 2013-2018, showed a 5.5 % net decline in quality of rivers over the period. According to the EPA a total of 53 % of river water bodies were at high or good quality with the remaining 47 % at moderate or worse. The percentage of high-quality monitoring sites was just 17%, down from 32% in the 1987–1990 period, which is a significant decline.

In response to decreasing water quality, the 4th Nitrates Action Programme (NAP) which started in 2017, sees the introduction of additional measures aimed at reducing the overall level of nutrient losses from agriculture. These measures relate to the location of drinking points on farms, spreading of fertiliser, farmyards, roads and cattle exclusion from watercourses (DAFM, 2018).

The 4th NAP of the Nitrates Directive (ND) requires farms with an allowance (derogation, so called as they derogate from the directive) to farm at a grassland stocking rate over 170 kg N/ha, to prevent cattle from accessing watercourses from January 2021. This 170 kg N/ha relates to the spreading of organic manure or slurry and that deposited by the animals themselves. Five EU member states apply for a derogation from the Nitrates Directive; Belgium (Flanders), UK (Northern Ireland), Denmark, Ireland and Italy (Piedmont and Lombardy). Derogations are reviewed every four years like the Nitrates Directive.

In addressing climate and environmental needs at local level, voluntary and mandatory measures can be used in a more targeted way. With increasing pressure on the Common Agricultural Policy (CAP) budget and limited resources, EPA funded this study to create a database which can ensure money is spent as efficiently as possible.

Impact and potential benefits of fencing off watercourses

This research uses Land Parcel Identification System (LPIS) data from the Department of Agriculture, Food and the Marine (DAFM) along with the Ordnance Survey Ireland (OSI) database PRIME2. PRIME2 is the most sophisticated dataset produced by OSI. It contains every building and feature in the country (houses, sheds, roads, field boundaries, rivers, railways).

One of the issues with the LPIS data is that it is not spatially accurate. Field boundaries zig-zag across the landscape. Matching the LPIS with the PRIME2 dataset produced a spatial database SLIDE (Spatial Land Identification Database for Éire), containing all 130,000 farms and over 2 million individual fields in Ireland. The figure shows a sub-sample of the information contained in the SLIDE database

Figure 1: A sample map from SLIDE. The red lines are field boundaries, the blue is a river. 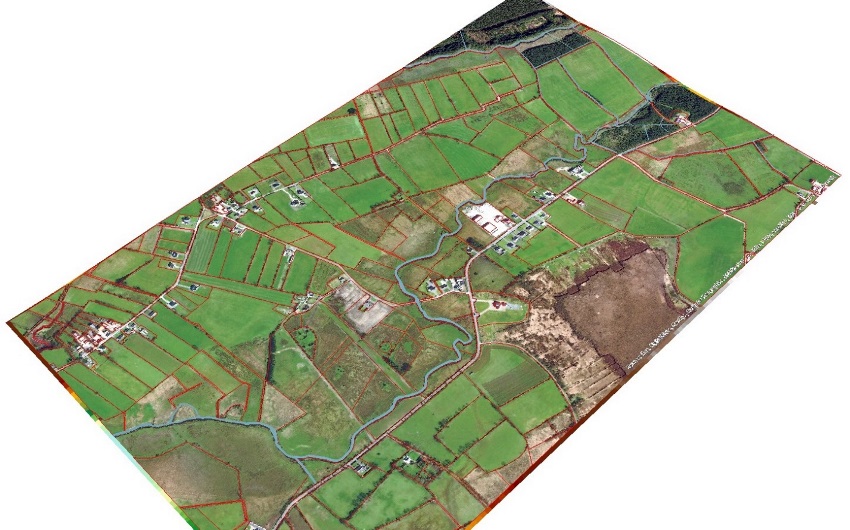 The objective was first to quantify the total amount of on-farm watercourses in Ireland and secondly using stocking rate, create a measure of potential damage to watercourses arising from livestock dung (and faecal matter), as other studies have found that cattle drinking in streams prefer to defecate in the stream as opposed to in the field.

Studies have estimated that cattle produce on average 23kg of faecal matter daily. If given access to a river, between 7-10% of 23kg will be deposited in-stream. Over the entire grazing season, that would be over 100kg per cow. In addition to the damage caused by the faecal matter, there is the additional damage due to sediment, damage to the riverbank and increased risk of disease.

To judge the effectiveness of a policy, the benefits and costs must be considered. The costs are measured by cost of the fencing and lost area around the riverbank. The benefits are measured by reduced faecal matter deposited in the river. The stocking rate is therefore an important determinant of cost effectiveness, as the more intensive a farm is, the more faecal matter deposited and the greater risk to water courses. The results of the cost benefit analysis show that farms with the highest stocking rates and largest paddocks with access to a watercourse should be prioritized for fencing. Although some areas might have higher amounts of on-farm watercourses, if agricultural intensity is low, the cost effectiveness of fencing is reduced.

These important local differences can only be calculated and identified using highly detailed information as it is not feasible to go through each of the 130,000 farms one by one to identify needs and suitable environmental measures. This is where the use of technology can help. The SLIDE maps can be utilised to identify the areas with the greatest level of cost effectiveness for a particular measure, thus achieving greater impact.

Figure 2: Example showing watercourse splitting one farm in two and also acting as a natural boundary between farms. 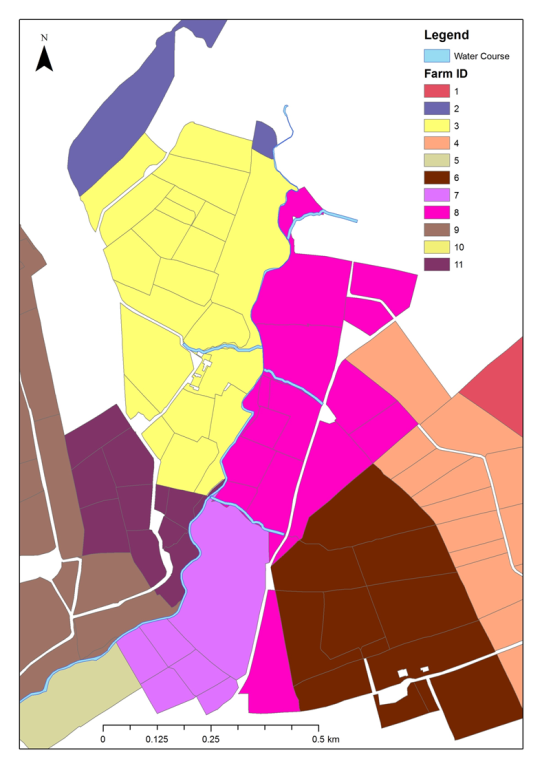 Place based approaches using technology can be used to implement more targeted policies. Rather than using a national approach, we can use large scale datasets to implement more locally relevant policies. One example is fencing of water courses another could be fertiliser application periods.

The results and findings in this article come from the published article: