Get the latest advice on winter and spring crops. Watch recordings from the recent Virtual Crop Walk in Teagasc Oak Park and watch a video on the best strategies for wild oat control in cereals. Fill out a grass weeds survey. By Michael Hennessy, Head of Crops KT Teagasc.

Growers are beginning to close the gate on some of their fields this week. Winter barley final fungicide application is generally applied by now and attention now turns to the flag leaf fungicide on winter wheat next week. The application of this fungicide will be applied to two different types of crops.

The first which is quite easy to describe, in that these crops are very clean with no septoria all the way down to leave number five. Due to the dry weather and how clean crops are farmers can choose most fungicides and don't necessarily have to take out the big guns to keep the crop clean. Products such as Aderar, Ascra Xpro, Elatus Era, or a mix of Proline plus Imtrex/Intellis/zulu, etc. are potential candidates for this timing. Growers can and should shop for value for fungicides at this timing. There are some varieties which should be monitored carefully (Bennington, JB Diego and Torp) as they had yellow rust, and where you suspect this yellow rust is active. For these crops choose a fungicide with a high rate of epoxiconazole for the flag leaf spray

The second type of crop are crops in the south of the country towards Tipperary and Cork which had intermittent rain over the past few weeks and now have septoria moving in the crop. This category also includes some isolated crops with active septoria in the east and North east. There may be little choice here other than to use the best chemistry at high rates to ensure crops remain clean. Growers should consider a high rate of products containing Revysol such as Revystar or Lentyma. Of course in both types of crops the addition of Chlorothalonil is preferable to any other multisite but this can only be included in the tank up to May 20th after this date switch to Folpet e.g. Arizona.

On Wednesday last, 7th May, the Teagasc Crops Team held their first Virtual Crop Walk with over 300 people participating in it. In the video below, Stephen Kildea discussed disease control in winter wheat and answered a number of questions from the participating audience. The audio will also be available as a podcast on the Tillage Edge here.

Stephen Kildea expands further on disease control in winter wheat in the video here especially as many crops are very clean and little rain is forecast.

Many people may also be considering adding other products such as magnesium, manganese or other trace elements and some may even be convinced to add in foliar K or even biostimulants to the tank. All of these products may have their place but the jury is very much out whether any of these products will result in more grain in the tank or extra margin in your pocket. Given that grain is below €145 per ton growers should question all of these inputs to ensure they are necessary and will protect or increase margins. John Spink, Head of the CELUP program in Teagasc touches on this point in the latest Tillage Edge podcast and also talks about running the Oak Park Research Programme during the Covid19 lockdown. This podcast can be accessed here

Recurring comments from farmers especially towards the north-east this week is that spring crops badly need some moisture and certainly need a day's rain to help them along. It's a year so far where trace element deficiencies are apparent in almost every field. Other years these deficiencies would not appear as the soil would have sufficient for rapid plant growth. Check your soil analysis to see if there are deficiencies however, this year, your crop may be showing a deficiency but the soil analysis may not be showing the deficiency. This is because there isn't enough soil moisture to bring these trace elements into the soil solution to make it accessible to the roots. 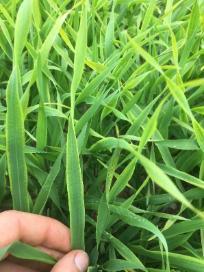 Magnesium deficiency is very common around the country at the moment and is creating a patchwork of colours in many fields. You will recognise this deficiency by the yellow coloration towards the outside edge of the older leaves and especially necrotic type effect on the very edges of the leaf.

Have no doubt 1/2 inch of rain would cure this in most circumstances but in the absence of rain protecting yield will force you to apply magnesium sooner rather than later. Research will tell us that applying magnesium generally does not result in increased yield. Light soils and low soil magnesium will respond best so where you are applying magnesium shop for the cheap and cheerful products (bitter salts, etc.)

All spring crops are racing through the growth stages with almost all crops now in the stem extension phase. Where the first fungicide has not been applied to Spring Barley research will tell us you have probably already lost out on yield. Nevertheless if you haven't your first fungicide applied do so sooner rather than later and where trace element deficiencies are evident in the crop apply those also. Ciaran Collins tells us more in the video below.

It's never a good idea to stress a crop with a plant protection product or a cocktail of products and this year its even more important not to stress crops which are already under moisture stress.  Ensure you check the safety of any mix you're applying and if in doubt reduced the number of actives in the tank and come back a couple of days later with the rest.

Don't forget where there were wild oats in the field the chances are the numbers are still reasonably high even if you have been applying a wild oat herbicide for the past 6 to 7 years. There may be a reasonable chance that the populations are down to a low enough level to allow hand roguing. However I would suggest consult your field records and omit the wild herbicide in the areas of the field where there were originally very few wild oats and also omit the herbicide in very small sections of the field or you know there were higher populations. This will give you a fighting chance of hand roguing where the populations are not yet under control.

In this video, Jimmy Staples outlines the best strategies for wild oat control in spring cereals.

More videos from the Teagasc Crops Team can be found on their YouTube Channel - don't forget to subscribe!

Where you are having difficulties controlling wild oats and suspect resistance we have an ongoing program where we are testing for herbicide resistance and would be delighted to hear from you. Samples can be collected from the field and we will test them later in the year.

In the meantime we have an ongoing survey to help inform us and the industry about the level of grass weeds and grass weed herbicide resistance in the country at the moment please click on the button below and fill out the survey - should only take about 10 to 15 minutes.