This week there are updates on the impact on crops of below average rainfall; common nutrient deficiencies in crops; watch videos on chocolate spot control in beans and weed control in fodder beet; listen to the latest podcast on grass weeds. By Mark Plunkett, Soil & Plant Nutrition Specialist

Over the last 2 months rain fall amounts have been well below normal (15 to 39% of normal) which is resulting in very dry soils and high soil moisture deficits (SMD’s) of >60mm nationally (see  figure 1). Rain fall amounts for a number of met stations from the south east to the north east for the month of May have recorded very low rain fall amounts for example;  Johnstown Castle 3.9mm, Oak Park 1.9mm & Dublin Airport 5.0mm to date. This is having both a negative and positive impact on crops.  The positive is that disease levels are quite low for the majority of winter and spring crops. While the negative is that soils are very dry which is restricting the soil supply of both major and minor nutrients.  Plants take up nutrients from the soil solution and a recovery in soil moisture levels is currently required to alleviate nutrient limits / stresses on the majority of crops at present. Rain is promised for Thursday night / Friday morning which hopefully will help soil nutrient supply issues at present and reduce the impact of dry soil conditions on both seed and grain yield development especially in spring crops. 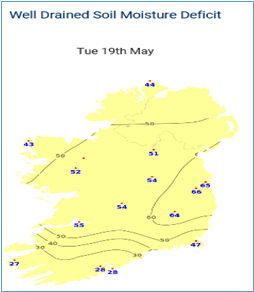 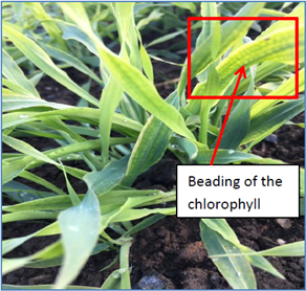 The prolonged dry soil conditions have resulted in a range of nutrient deficiencies in crops with magnesium and manganese most widely reported in cereal crops.  There are also a number of reports of mainly potassium (K) deficiency in spring cereal crops sown in freshly broken ley ground. At this stage many crops will have been treated for manganese deficiency due to field history and crops symptoms due to drought conditions.  These crops may need a follow up treatment where there is a known soil deficiency and where dry soil conditions persist.  Symptoms of magnesium deficiency (see figure 1.1) are widely reported on particular soil types due to the dry soil conditions.  Research would show that unless soils are very deficient (Index 1 <25 mg/L) there generally tends to be very low yield responses to Mg applications.  Where crops show continued Mg deficiency symptoms on low index soils inclusion of a foliar Mg in the spray programme will be required.  Where K deficiency is present in spring cereal crops it is recommended to apply 125 to 200 kg/ha of 50% K (MOP) to solve crop deficiency problem. More information here

Spring Barley crops are moving through crop development stages and crops range from mid tillering to 1st / 2nd node.  In general disease levels are low at present and crops will require their 1st fungicide application to give 3 to 4 weeks protection.  It is recommended to apply a 50% rate of product partners based on DAFM variety disease rating and diseases present in the crop at time of spraying.

Spring Oats look quite good with good shoot numbers and good crop color despite the dry conditions. Many crops are due a growth regulator if not already applied at present plus a mildewicide + Azole for mildew & rust control, mildew levels are low but best to include a fungicide for protection.

Spring Wheat crops are moving well with crops in stem extension (GS 31 to 33) at present.  Watch spring wheat crops for yellow rust over the coming days / weeks.  Crops are due a board spectrum disease control programme strong on mildew & septoria plus a growth regulator for lodging prevention if not already applied.

Winter Wheat varieties in general are very clean (with exception of some crops in the south) with low levels of disease present to date due to only 1 or 2 septoria events (wet weather).  Varieties such as JB Diego, Graham and Bennington have had yellow rust problems so keep an eye on these crops and tailor fungicides products to stop flag leaf rust infection. Crops have moved to flag leaf stage over the last number of days and are due their main fungicide application at present.  When deciding on the flag leaf spray select products based on disease pressure and tailor fungicide rates accordingly to give persistent broad spectrum control over the next 3 to 4 weeks.

Winter Oats are at growth stage 49 to 59 (boothing to heading).  These crops are relatively short with low levels of disease present.  Aim to apply final fungicide to protect the crop against powdery mildew and crown rust over the coming days to ensure good grain quality.

Spring Beans are well established but like all other crops require rain. Disease levels are relatively low but there are some reports of ascohyta which is primarily a seed borne disease. There are few reports of chocolate spot but there have been a few cases of downy mildew reported. Most crops will receive a fungicide shortly as they approach early flowering. Disease control in beans is mainly preventative so the fungicides need to be applied at the first signs of disease or before flowering.

Fodder Beet crops have established well with good plant stands. To date weed control programmes have worked well with good levels of weed control evident in crops.  Typically crops are at the 2 to 4 leaf stage which is ideal timing for applying any remaining nitrogen.  Apply 30 to 40 kg N/ha as CAN (27%N).  Check soil test results for minor nutrient such as boron, manganese and magnesium and apply where required. Manganese deficiency can occur as speckled yellows in beet especially where soil pH > 7.0 or under prolonged drought conditions as currently experienced. Magnesium deficiency can also been seen in beet crops especially on low index soils (Index 1 or 2), light sandy soils during dry soil conditions. Treat crops with recommended Mn or Mg foliar formulations where required & consider repeat applications.

In the below video Ciaran Collins, Teagasc Crops Specialist outlines how proper weed control in beet is essential for good yield.

Grass weeds are starting to appear in field margins (esp. bromes) they should be hand rouged where possible reduce the spread & return of seeds. Crop destruction should be considered as a viable option where a severe infestation is present. The timing of spraying off the crop is crucial in order to get positive results. Crops should be sprayed before the grass weeds have finished flowering to ensure that no weed seeds are viable. Black-grass will start to flower in April and in most cases will now be approaching the end of flowering so crops with a black-grass infestation should be prioritised and sprayed as soon as possible.

We have an ongoing survey to help inform us and the industry about the level of grass weeds and grass weed herbicide resistance in the country at the moment please click on the button below and fill out the survey - should only take about 10 to 15 minutes.