We are all well aware that our weather and climate have a major influence on agricultural production. The Agricultural Catchments Programme (ACP) have been studying the influence of agriculture on water quality for over ten years in six small intensively farmed areas.

We are all well aware that our weather and climate have a major influence on agricultural production.  The contrast between grass growth in the last two years as a result of the drought in 2018 is a very obvious example of this.  Average yields on farms recording grass growth using PastureBase Ireland were 13.25 tonnes DM/ha in 2019 which was a 15% increase in DM production nationally compared to 2018.  Tillage farmers are also well aware of how much yields were affected by the drought in 2018.  Potatoes are a crop that is particularly sensitive to moisture shortage, but try to imagine what the yields were like from some of the late sown spring barley crops in south Co. Wexford which did not receive any rainfall at all between sowing and harvest.  Following on from this drought in 2018, strong winds in September (Storm Ali) lodged maize crops in the north east of the country, significantly reducing yield potential as a result of one day’s weather conditions.  The strongest wind speed recorded in the Dunleer catchment over a ten minute period was 69 km/hour at 10am on Wednesday 19th September.  Most of you will remember that day due to the national ploughing championships being cancelled.  The impact of such extreme weather events is very clear, but there are also more subtle indirect influences on agricultural production, such as through the spread of diseases, like blight or septoria on a tillage farm or fluke with livestock.   It is generally taken that 60% to 70% of the year on year variation in crop yield can be associated with weather conditions.

Thankfully, the properties of soil can significantly mediate the effects of weather.  The ability of soil to hold onto moisture and temperature can, and does buffer the impact that weather extremes have on agriculture, even those experienced in 2018.  Soil types vary an awful lot in their ability to hold moisture.  Heavier, high clay content soils will, up to a point, retain water longer during a dry spell and crops grown on them are usually less prone to suffering in drought conditions.  But in a wet year high clay soils are easier poached and will become water logged earlier.  As a result grazing is often curtailed by ground conditions rather than growth.  While heavier soils are usually slower and later to warm up in the spring, they retain warmth longer into the autumn and grass growth usually follows suit, producing yield later in the year.   It is the management decisions that a farmer makes to suit both the soil type and weather conditions that results in achieving the levels of production (and efficiency) in any given year.

As well as influencing agricultural production, the weather and soil type are also key factors that have an impact on water quality.  The Agricultural Catchments Programme (ACP) have been studying the influence of agriculture on water quality for over ten years in six small (1,000 hectare) intensively farmed areas, representing different farming enterprises and soil types.  Knowledge of the weather is key to this research, and each catchment has been equipped with an automatic weather station.  (The Cregduff Catchment is significantly larger in size and consequently has two weather stations).  The data from each of the seven weather stations is available to the farmers managing land in the catchment areas (and the general public) through the web site www.acpmet.ie .   The most recent hourly figure for average air & soil temperature, wind speed & direction and total rainfall & evapotranspiration are displayed.  Daily figures for the last 30 days are also available.  Fig. 1 shows the location of the ACP weather stations and Fig. 2 shows the soil temperature in the Monaghan catchment during the month of December 2019. 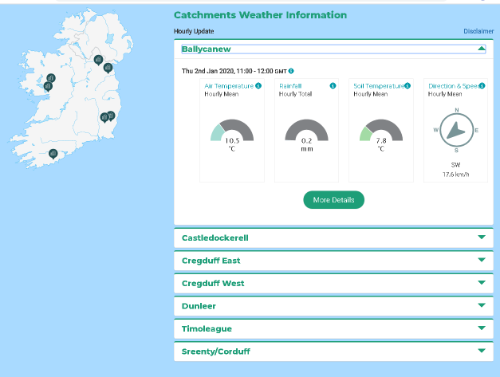 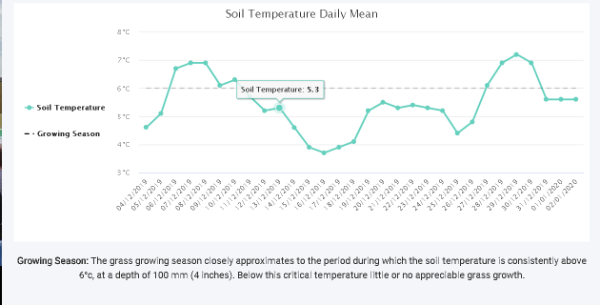 I already mentioned that soil type has a major influence on how farming impacts water quality.  Free draining soils are more risky in terms of N losses to water and this usually overrides farm practice and intensity.  The Ballycanew catchment, for example, has a heavy, high clay content soil and the average stream N concentration (2.5 mg/l) is two to three times less than the Timoleague (5.7 mg/l) and Castledockrell (7.0 mg/l) catchments, which are fee draining.  Water percolating through the soil in free draining catchments dissolves nitrate, which is then carried in ground water, eventually ending up in the estuary via spring fed streams and watercourses.

The exceptionally dry summer of 2018 is another example of how weather is the other major factor impacting fertiliser efficiency.  During the drought, soil bacteria continued to break down organic matter, releasing mineral nitrogen.  However, as grass was not growing due to drought stress there was little or no uptake of this naturally occurring N, or any other applied fertiliser N.  When the rain did eventually come in the autumn, much of this unused nitrogen was washed through the dried out soil and into ground water.  The water tables then rose and the streams started to flow with concentrations of N that were significantly higher than that found on previous, drought free years.  Graph 1 shows how the dry summer of 2018 influenced nitrate concentrations in the Ballycanew catchment.

If we are to achieve maximum nitrogen use efficiency it is critical to manage fertiliser applications to suit the soil type and weather conditions.  Correct timing of N application will significantly reduce losses and give greater growth response per kilo applied.