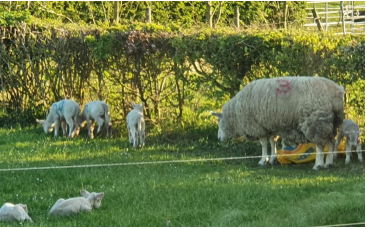 For most lowland flocks the lambing season is done and dusted for another year, except maybe for a few farmers that left rams a while longer leaving the famous ‘stragglers’ that cause as much work as the main flock. For some it is a great relief that the lambing season is over and they will be happy with the lambing returns, while others will not even want to think about the last few weeks.

Whichever camp you are falling into, now is a good time to assess the outcomes this spring and the areas for improvement in the future. This of course is much easier if an attempt has been made at keeping some records during all the commotion.

Record-keeping is a chore and a burden during lambing but the data gathered will give an understanding of how the flock is doing and may help in solving some issues.

The number of lambs is the obvious starting point from the total number of ewes to the ram, including the empties. Measuring losses is an important step when it comes to improving lambing performance. When do the losses occur? The first real indication of potential lamb numbers will be at scanning. It has to be accepted that losses will occur and we need to compare what’s happening on the farm with an industrial norm or a benchmark.

Overall a typical figure of losses from scanning to sale would be between 15 and 20%. This is not counting the embryonic deaths early in pregnancy that were lost which will never be known. If the causes of lamb losses at the various times can be determined it is a huge aid in management. Ewe loss then is the other big barometer. If ewe loss is running at more than 3-4% this may suggest either an overall health problem or possibly feed or management issues. The performance of individual ewes within a flock can vary hugely and having some simple system to monitor and record this will be beneficial for later in the year and the following season. Had she a single or twin and did she need assistance at lambing or not? Milk supply can be variable and good records may help in determining if it’s genetic or just a management issue.

The following is a simple example of some of the metrics for the Average Flock targets.

Another area that requires a lot of careful recording of information is treatments that are administered to the flock. This is required for animal remedies records and also for quality assurance schemes. Again could be linked to what data is collected at lambing. Ewe condition is hugely important at various times during the year and again records of such and a linkage to a health plan can highlight problem animals. Nowadays data can be gathered numerous ways such as using a simple notebook/cards to smartphones and apps on phones or to full use of EID and tag readers and recorders which is probably the way forward for bigger flocks.

The decision is to start recording some information. It can be as much or as little as you wish and then take time to interpret this as an aid for the future. From year to year the markets will vary and the farmer cannot control these to any great extent. The lambing performance figures will also vary from year to year but this can be controlled more than the markets!