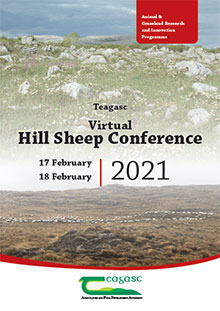 David McLaughlin together with his Teagasc Advisor, John Cannon, discussed his farm progress during his time as a participant in Teagasc Better Sheep Programme since it began in 2008 which has resulted in the number of lambs reared per ewe joined increasing by 0.3 whilst gross margin improved by €38/ewe.

Watch Part One of the Teagasc Virtual Hill Sheep Conference below:

Dr Liz Genever, a private consultant from Lincolnshire, UK, presented information on the importance of monitoring ewe body condition score at different times of the year, its impact on animal performance and management required for animals which are below target.