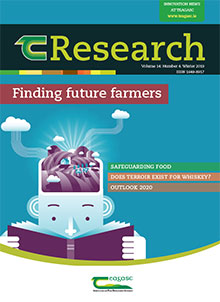 The purpose of this guide is to assist meat researchers in understanding the commercialisation process, and to ensure that outputs from their work are appropriately managed and exploited.

PDF
Accurate income measurement for the assessment of public policies - 5562

Accurate income measurement for the assessment of public policies

Suckler cow numbers in Ireland have almost trebled over the last twenty-five years reaching 1.18 million in 2008 or 52% of the total cow population (Department of Agriculture Fisheries and Food (DAFF), 2004 and 2008). Total cattle disposals in 2007 were 1.98 million of which, 1.77 million were slaughtered in Ireland and 0.21 million were exported live (Bord Bia, 2008). Thus, most cattle are slaughtered in Ireland with the number exported as live animals varying in recent years from a high of 0.40 million in 2000 to a low of 0.10 million in 2001. Total beef output was 578,000 tonne of carcass weight equivalent in 2007 of which, 85% was exported.