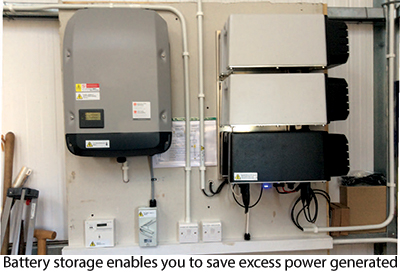 Domestic battery storage is a rapidly evolving technology that is typically used alongside solar photovoltaic (PV)*. It allows surplus electricity generated by solar panels to be stored for later use, rather than exported to the National Grid.

If you have solar  PV,  you  can  generate plenty of electricity when the sun is shining. But on overcast days you’ll make less, and you’ll make none at all at night. This generation pattern often doesn’t match up with when households want to use electricity – it’s at night when you want the lights on and to use appliances like a dishwasher or TV.

If your solar panels generate electricity and you don’t use it, it ends up  being  fed  into the National Grid. You will not get paid for this excess electricity, but you make savings   if you use that excess power yourself. This is where battery storage comes in. If you can store the electricity generated during the day, there is less need to consume it (e.g., through milk cooling, running your domestic washing machine) when the sun is shining, and you’ll use more of the power you generate and save money.

In addition, some batteries can now export and import electricity directly into the grid, helping to balance national demand and supply issues, and also reducing carbon emissions at peak times. New methods to engage in energy trading are emerging, like selling electricity locally to neighbours or to a micro grid, or being part of an  international ‘battery community’.

Is battery storage for me?

If you are a low  electricity  user  and expect to recoup an investment quickly, battery storage probably isn’t for you. But it might be something to explore in more depth if:

To assess the financial investment,  you will need to know your annual farm/household electricity usage, and the annual generation capacity – actual or expected – of your solar panels. Next, you’ll need to consider likely installation costs based on the type of battery you want, and also any potential export payments.

What to look for

First off, the battery itself. Once you know your electricity usage and  generation capacity, you can think about the type of battery storage system that suits you. The points that follow are designed to help you   do this. It’s  worth bearing in mind that  battery storage is developing fast. Storage capacity in Ireland (domestic and non- domestic) is expected to  increase significantly, and such growth is  likely  to bring down the costs. The technology itself – and associated services – is changing too, becoming more sophisticated and offering further options to those seeking to become more actively engaged in an increasingly decentralised electricity network.

Most home energy storage batteries are lithium-ion (which are also used in consumer electronics). These are lighter, smaller and longer lasting than lead-acid batteries. They have a high energy density (kWh/kg), so can store more electricity for their size, and can discharge a larger amount of power at any one time. They are also more efficient than lead-acid batteries in terms of energy loss, and need less care to  maintain  battery health. Unsurprising, then, that lithium-ion batteries are more expensive, which is why lead-acid tends to be used in off-grid properties, where a lot more electricity storage is required.

Useable capacity of the battery

Capacity is how much electricity the battery can store in kilowatt hours (kWh). Useable capacity is less than total capacity, because batteries should not be discharged completely as it damages them (this is prevented by charge controllers). A 14kWh battery might have a useable capacity of 13.5kWh.

Current batteries have cycles warrantied for 6,000- 10,000 cycles. This is  not the same as the product warranty, which is normally 10 years, although batteries last longer than this.

This is the power input and output in kW. Make sure that you have enough power output from your battery to run the appliances you use; a 5kW output can run a kettle, tumble drier or electric fire, but a 2kW output probably can’t. If you can’t access enough stored battery  power  when  you need it (the bottleneck effect) you’ll need to supplement your supply with grid electricity. Similarly, if you can generate 4kW and your battery can only input 2.5kW,  you  are wasting 1.5kW of power, which you can’t store (but can export to the grid with no   price per kWh available).

Price per kWh of storage capacity

There are various batteries available on the market, and at varying prices. If you are trying to decide between similar batteries, then the price/kWh of storage capacity is a useful way to compare different

Some batteries do not provide backup if there is a power cut. Is this essential for you? If so, it may require some rewiring, and you will need a larger storage capacity to accommodate that reserve.

Solar PV needs an inverter, as does a battery. A system using DC coupling has a single combined inverter, while AC coupling requires separate inverters for batteries and panels. The type of coupling used has implications for the system’s function and efficiency. Speak to an installer about this. The pros and cons of each are briefly discussed next.

Some batteries can be used not only to store electricity from a home’s solar panels, but also to store surplus electricity from the grid. Such ‘smart’ batteries draw power from the grid when it’s  plentiful and cheap, which can either be used at home later, or sold back to the grid at a higher price in times of high national demand. Such virtual power plant (VPP) services that help balance the national grid are rapidly evolving, but note that not all batteries can do this, and that there are unresolved issues around the finer details of their operation, for example, whether this ‘re- exported’ electricity will be eligible for payments. VPP services require an agreement with an energy company or a third party, and some energy companies may require a separate meter to be installed.

VPP services are one of several ways that battery storage could transform the relationship between households generating electricity and the grid. Others include micro grids (local independent grid networks), peer- to-peer trading (e.g., selling electricity to your neighbours), and communal energy supply (battery owners sharing their electricity with each other). Systems such as these take advantage of smart meters, and may include time of use pricing, where the cost of power  is based on low or high national demand.

If a feed-in tariff is introduced, this will negate the need or economics for battery storage, except in situations where it makes sense to install a small amount to act as a buffer between generation and consumption, to maximise self consumption, or to act as a method of flattening the peak usage for capacity or costs reasons.

For conventional dairy farms, currently an element of battery storage is required as there is a lag in demand during the day and the surplus electricity has to either be used to heat water or go to battery storage. Beware of some batteries that come with a five-year limited cycle warranty. They may have a change to discharge limit of circa 90%, and in some cases, very slow response times both in discharging and stopping to discharge, which leads to large inefficiency.

Beware also of hybrid battery  storage. This is where batteries store surplus generation from solar PV during the day and discharge it at night, before  recharging again during the night on night-rate electricity. This sounds like a great option. However, be aware that the efficiency losses changing AC current  to DC current to store it,  and  then converting DC back to AC to use it, mean that as much as 25-30% of the night rate electricity is wasted in efficiency losses, making the exercise unviable. The use of hybrid batteries also seriously limits the warranties, as cycles are used up a lot 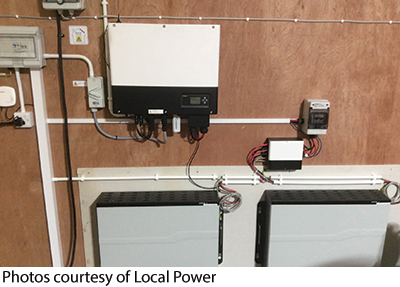 All battery systems store energy in DC and many battery storage systems operate very inefficiently. Solar PV generates DC current and this is converted into AC by an inverter for use. Then  the battery system converts it back into DC to store it, and each time anywhere from 6-8% of the energy can be lost. Ask installers about the ability of the proposed technology to mitigate such losses.

Working out your return on  investment  is not simple, but the following calculation will give you a very rough idea. For simplicity, it assumes you are not already generating electricity (if you are, you could use an  annual bill from before the solar panels were installed). The calculation also assumes that your battery is capable of storing all the electricity you generate and discharging it at  a rate that meets your demand.