There are three types of apples produced commercially in Ireland:

Dessert apples are the most common type found in retail sales in Ireland. It should also be noted that the proportion of Irish apple retail sales through supermarkets has increased in recent decades. Around 90% of all fresh apple retail is through the supermarket multiples. With this came the development of volume purchasing through central distribution centres (CDCs), so in many cases, large volume purchases of fruit and vegetables are made internationally, and Irish multiples are served by these arrangements. Demand for cooking apples has decreased over the years due to changes in diet and cooking practices. Our climate is very suitable for production and there is no problem with imports from warmer countries, but culinary apples have a reducing share of the apple market.
Cider apple production consists of about a third of the acreage being grown with special varieties. The out-graded apples from both dessert and culinary apple production are used to make cider. With cider sales levelling off in recent times, this sector has seen small growth on the back of craft ciders making some inroads in the market, but overall volume increases are small. The most satisfactory sales of Irish apples occur through farm gate sales and farmers’ markets.

A large number of apple producers are already involved with apple juice production and other products derived from apples. A significant number of Irish apple producers have branched out in the recent decades, regarding their product offering and now we have some of the best farm shops in the country centred on apple orchards and their produce. The interest in craft cider production has steadily developed in recent years; however, more needs to be done from the licensing perspective to allow small operations to develop.

There is a market for processing apples. Currently dessert, culinary and cider apples are juiced for cider production and apple juice markets. A range of companies produce quality ciders and fruit juices for the retail and food service sectors in Ireland and internationally.

Apples are a top-selling fruit, with retail sales valued at €131m (Bord Bia, 2019). The average retail price per kg is €2.29, up 8.6% year on year. We only supply 5% of the dessert apple market, so it is clear that there is potential to import-substitute with Irish apples.

The cost of establishing an orchard can vary widely, depending on type of apples, density and varieties. In general, the greater the density the quicker they come into production and the shorter the life cycle of the tree. Dessert apple trees planted at high density have a life of about 12-15 years, while in extensive production of culinary apples, trees last 25-30 years. This dessert apple costing is based on an orchard area of 8.09ha (20 acres), plus space for a yard and facilities. For the purpose of this exercise, it is assumed that the grower already owns the land or it is acquired free of charge.
Table 1 summarises the planting and capital costs required at the start of this business. Material costs include the trees, posts, rabbit guards, shelter trees, lime and fertiliser. The labour costs include the associated planting and training costs that take place when the trees are planted. For this exercise, plant spacing is 1.25m and row width is 3.25m. This allows for 2,461 trees per hectare (966 per acre). Capital expenditure includes the cost of a utility building, required for machinery and apple storage, as well as the costs of general orchard machinery. For the purpose of this costing exercise, it is assumed that a 40% National Development Plan (NDP) horticulture grant is received on eligible costs. 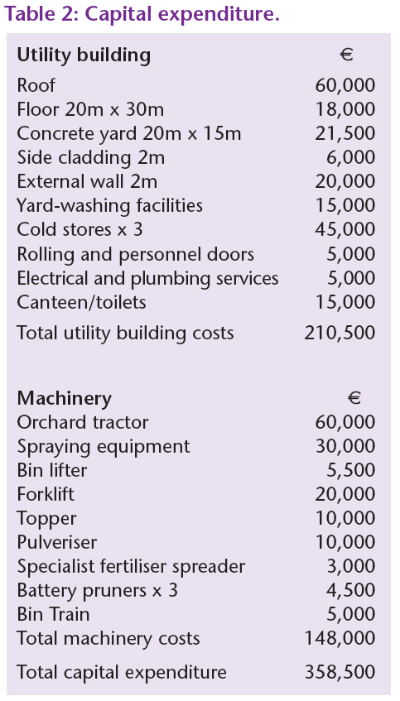 Details of capital expenditure are outlined in Table 2. Included in canteen/toilets are canteen partitions, kitchenette facilities, toilets and a septic tank. There are three cold stores included in the utility building cost, each measuring 110m3 (5.5m long, 5m wide and 4m high). Each store can hold 66 apple bins, which is the number that will fit on an articulated lorry. The stores can maintain a temperature of 1-2°C, although the aim of these stores is just to remove field heat from the apples prior to onward delivery to centralised grading and packing. Also included are details of capital expenditure towards machinery. This machinery is required for maintenance and harvesting the orchard.

While our climate is not optimal, it is suitable for growing apples of certain varieties successfully in certain geographical locations. Suitable areas stretch along the east coast from Louth, down to west Waterford, and inland to Kilkenny and Tipperary. In the midlands, site selection is critical, as late frost can be a significant problem. Along the west coast, high winds and rainfall militate against producing quality apples.

Soil and site selection are very important. Apples requiring free-draining soil, not exposed and fertile. Trees are planted in rows, the density depending on the variety and rootstock used. In general, depending on the system, between 500 and 2,500 trees per acre are planted. Trees must be staked and a spray programme must be practised to prevent disease and pest attack.

Apples can be grown profitably in the favoured areas. Locally grown fruit is widely appreciated by consumers, and keenly sought after. Apples can be highly flavoursome with minimal air miles attached, and they meet all the criteria of a modern consumer. If one is in a position to supply local markets as outlined above, i.e., farm gate sales and farmers’ markets, apples are worth considering and units of a hectare upwards are feasible, depending on current available machinery and buildings.