Energy Use on Pig Farms

Energy Use on Pig Farms (PDF)

For most pig units the three biggest energy consumers are heating, lighting, and ventilation, so it is these areas that offer greatest scope for efficiency savings. Measuring, recording and benchmarking energy use across the business is the first step to improving energy efficiency, which is often expressed as kilowatt hours (kWh) per pig produced basis. A lot of the savings are greatly influenced by management, which is the most important aspect of energy efficiency.

Energy on pig farms is mainly used for: 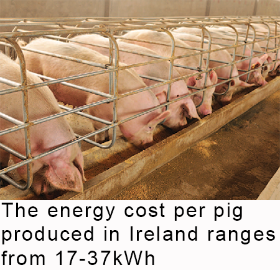 A Teagasc survey carried out on eight Irish pig farms, with a total of 4,701 sows (approximately 3% of the national pig herd), showed an average usage of 27kWh per pig produced (with a range of 17-37kWh/pig produced).

More recent audits done on 23 pig farms show a huge variation in the energy usage, ranging from 18kWh up to 45kWh/pig produced, with an average figure of 28kWh/pig produced. These audits for 23 farms included over 20,000 sows. The high variation from one farm to another suggests that a greater emphasis needs to be put on energy efficiency.

Another source of data available is from 46 pig farms recording on the Teagasc eProfit Monitor (2019). The energy cost (heat, power and light) is €3.29 per pig produced (or €88/sow/year based upon 26.8 pigs produced/sow/year). 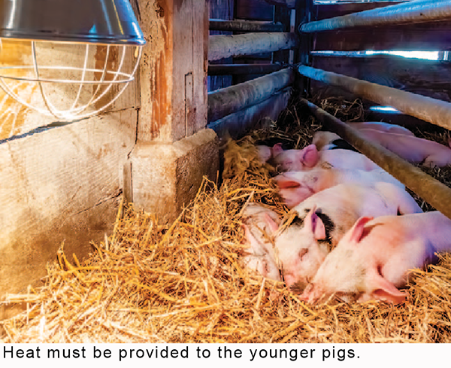 Heat must be provided to the younger pigs on a pig unit. The temperature in the farrowing rooms is critical for the survival of newly born piglets. The ideal is to have a farrowing room temperature of 24°C once the first piglet is born in the room. This should be reduced to no less than 20°C when the youngest piglet in the room is over two days old.

It is vital to minimise uncontrolled heat loss to save money and improve output. Pig producers may use paper to supplement the heat source at farrowing rather than an infrared bulb. If the average gestation period is 115 days, it is not necessary to heat up the creep area on day 113 of gestation.

The aim is to have newly weaned pigs kept at 29-30°C initially, with a reduction of approximately 2°C in room temperature each week thereafter. Accurately controlling heat pads and lamps is another key area, along with enclosing creeps to accurately control temperature, prevent heat loss and reduce heating requirements.

A portable USB temperature/relative humidity sensor and data logger is a cheap effective way of recording variations within the building, while a thermal imaging survey gives a more accurate indication of heat losses. Thermal imaging will not show air temperature gradients or air movement, so should be ideally used in conjunction with smoke tests. The use of a maximum– minimum thermometer in rooms is a good way to monitor temperature fluctuations over a period of time.

On an 800-sow pig unit the usage of kerosene was 900 litres per week to heat 144 farrowing crates and four rooms of first-stage weaners (270 weaners per room). This was an annual cost of €46,800 per year. The cost of inserting air-source heat pumps for this farm was €50,000, plus an installation cost of €8,000. The annual cost of electricity to run the pumps is approximately €12,800 per annum. This is an annual saving of €34,000, which gives a payback time of one year and eight months – excluding the cost of borrowing the capital. 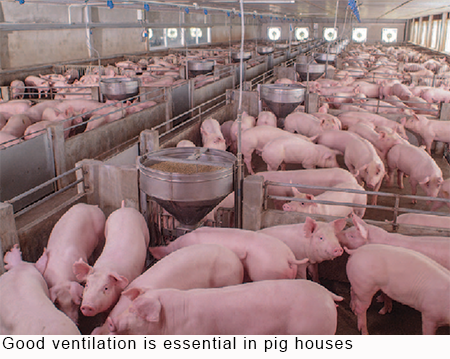 Heating and ventilation efficiency are closely related. Pig houses are ventilated to control the levels of gases (carbon dioxide, ammonia, methane and hydrogen sulphide are the main ones) and airborne pathogens in the pigs’ environment. This is done to achieve good growth performance in terms of growth rates and feed conversion efficiencies. It is imperative that airflow can be properly controlled without influence from draughts or air leaks.

Some pig houses are controlled without the use of mechanical fans to pull fresh air through the house. This system relies on the “stack” effect, which uses the principle of warm air rising and being replaced by cooler fresh air from outside the building,  and is referred to as natural ventilation. The only energy used in this system is to control the air inlets and outlets in the building. This system has very low running costs, but can be difficult to manage, particularly in very changeable weather or on very exposed sites. It is vital to service fans regularly and keep louvres and other vents clean and free from obstruction. Outlet fans can be made up to 10-15% more efficient by adding cones. Replacing old fans with energy-efficient models pays back relatively quickly and is likely to improve odour dispersal. It may also be worth considering misting systems to help cool buildings.

A number of units have installed air-source heat pumps (otherwise known as air-to-heat pumps) to heat the heat pads in farrowing units. These systems extract heat from ambient air and use it to heat water via heat exchange systems. This can be ideal to heat water to temperatures of 55°C.

The capital costs of these systems can be high, but they are effective in reducing fuel costs. A hybrid system also exists where the heat pumps operate to certain parameters but if the ambient temperature drops too low, a boiler backup steps in to provide the heat supply. This system links to computerised controls, which can adjust to changing costs of electricity prices, fuel costs, etc., as programmed.

The Sustainable Energy Authority of Ireland (SEAI) has a 30% capital grant scheme towards the cost of a heat pump. The grants are part of the Support Scheme for Renewable Heat (SSRH) to encourage the use of renewable and bioenergy in production processes. The SSRH also offers ongoing operational support under 15-year contracts for biomass and biogas-powered heat sources. 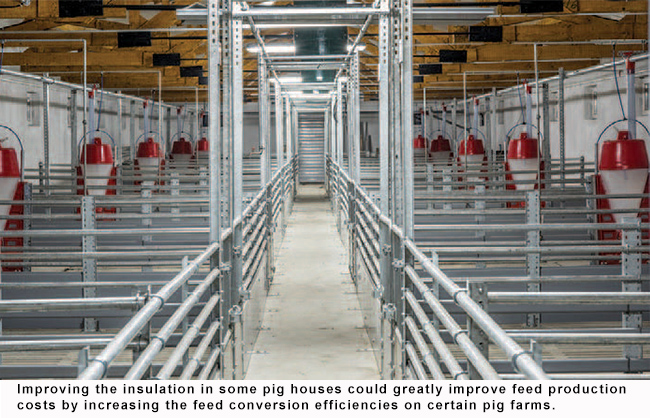 The provision of heat in buildings is very wasteful if the structure has poor insulation. The walls and ceilings should be insulated to achieve suitable U-values (the rate of heat transfer through a structure). If the insulation has been damaged by pests, it can have huge cost implications. The temperature fluctuation in the pig house should also be checked by using maximum–minimum thermometers to monitor if house temperatures vary considerably between day and night. Improving the insulation in some pig houses could greatly improve feed production costs by increasing the feed conversion efficiencies on certain pig farms.

Good lighting should be a priority on any unit and LEDs offer particular benefits. The capital costs are high, but LEDs give energy savings of 80-90% over conventional lighting, as well as potential health and productivity benefits. Together with high efficiency, LEDs also have the ability to produce a range of light wavelengths. Research has shown that blue wavelengths are particularly effective at influencing biological rhythms in pigs and spectral control of light has great potential to improve welfare and productivity.

A further area to consider is fitting variable speed pumps to wet feed and waste equipment. This can cut costs by 30-50%. 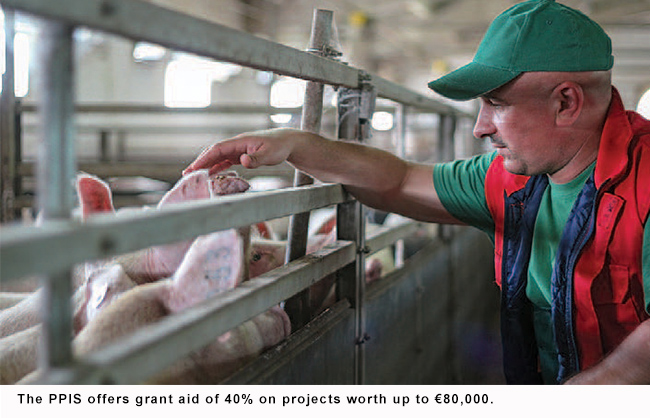 The Pig and Poultry Investment Scheme (PPIS) is part of the Targeted Agricultural Modernisation Scheme (TAMS) and is open to all pig farmers who meet the eligibility criteria. The Scheme offers a standard rate of 40% grant aid available up to an investment ceiling of €80,000 (i.e., 40% of €80,000). Items such as photovoltaic (PV) solar panels, air-source heat pumps and heat recovery units within buildings can receive funding if eligible.