The llama is a large domesticated camelid, with an average life expectancy of 20-25 years. They are livestock, and should be treated as such, not pets. Llamas are larger in frame and heavier than alpacas, weighing 110-250kg, and are distinguishable by their curved ears. Fully mature llamas stand 102-110cm at the shoulder. Females are reproductively mature by 18-24 months and can breed throughout their lifetime. The gestation period is about 350 days and llamas usually have single-cria (baby llama) pregnancies.

Llamas are curious, sociable, intelligent, and trainable animals. They can be trained to accept a halter, be led, pull a cart or carry a pack, for example. 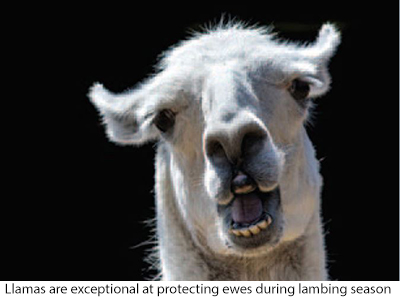 Many livestock including sheep, goats, alpacas, and poultry are accepting of a llama guard. They are exceptional at protecting ewes during lambing season, as they excel at deterring dogs and foxes.

While llamas are capable of kicking, they aren’t generally an attack animal, rather they provide a warning at the sign of potential danger. The alarm sound is loud and hornlike, but wary llamas can also hum or click. Llamas will also spit when they feel they are in danger. A gelded male or an adult female can be used as a guardian animal.

Each potential producer must research and source their own market. The Alpaca Association of Ireland may be of some help, given these are also camelids. 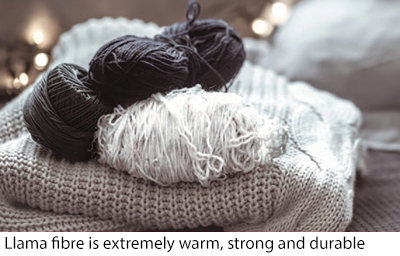 The fibre of both alpacas and llamas is considered to be a luxury fibre, in the league of cashmere and angora. Llama fibre: 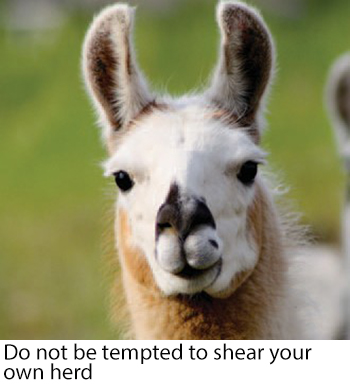 The quality, degree of softness, and strength of the fleece depends on fibre diameter and density. Diameter is measured in microns, with the softest fibres ranging in thickness from 10-22 microns and coarser fibres 30 plus microns. Llama fibres range from 20-40 microns. Llamas are sheared annually in the spring. Poor shearing technique can spoil the fleece and reduce yield. Unless you are experienced, do not be tempted to shear your own herd. Fibres on the neck, underbelly, and legs are coarser and of varying lengths. Llamas produce 2-5lbs of fleece per animal. 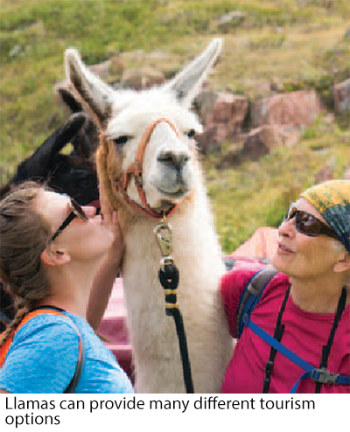 There are a variety of options for tourism:

Llamas are somewhat independent, so an individual looking to own just one or two animals might do better with a llama than with alpacas, though herd existence is always more favourable.

Llamas are completely adaptable to an Irish climate and landscape. An acre of good land can support about four llamas. A three-sided field shelter to stay dry when weather is inclement and which provides shade for hot summer days is recommended. Barbed wire is unsuitable. The diet of a llama is  comprised primarily of grass or hay, though concentrate feeds may be used to supplement forage in certain circumstances.  A supply of fresh, clean water is essential. Supplementation with pelleted mineral supplements is advised.  Llamas  are  hardy but they may, at times, require veterinary treatment. They require annual vaccinations and a parasite control programme, which should be discussed with a vet. Their toenails need to be trimmed and they should also have their teeth checked annually.

Llama fights are visually dramatic, with spitting, ramming each other with their chests, neck wrestling and kicking. Female llamas are usually only seen spitting as a means of controlling other herd members.

Fact sheet produced by the Rural Economy and Development Programme.