Miscanthus (Miscanthus X Giganteus) is a tall C4 perennial woody grass of East Asian origin, which has a high biomass yield potential and has been evaluated at Teagasc Crops Research Centre, Oak Park, Carlow, since 1993. It is sometimes confused with elephant grass (Pennisetum purpureum) but it is a different species. Miscanthus, because it is a C4 plant, has advantages over C3 plants in respect of higher conversion of solar radiation into biomass, higher water use efficiency and higher nitrogen (N) use efficiency.

Similar to the majority of C4 plants, it grows best in areas that have relatively high temperatures and high solar radiation. The conditions required for growth are not unlike those for maize but miscanthus has a lower threshold temperature in comparison to maize. To date, the results from the Oak Park trials show that annual yields range from 10-15t/ha dry weight. These were obtained on medium-textured loam soils with approximately 3% organic carbon.

To ensure correct crop nutrition, it is essential to have a recent soil analysis report before planting. Miscanthus is tolerant to a wide range of soil pH, but the ideal pH is between 5.5 and 7.5. For peat soils the pH will always be lower and the ideal will be pH 5.0-5.5. Attention to soil pH will only be required on more marginal sites to ensure satisfactory soil pH. As with winter wheat, the highest yields will be obtained from the good water-retentive limestone soils. However, as miscanthus is harvested in early spring, it is essential that the soil is trafficable at that time.

Miscanthus is sterile and thus produces no seed; therefore, it must be established by planting pieces of the root called ‘rhizomes’, which are usually collected from ‘nursery fields’ where miscanthus has already been established. The rhizomes can be broken up, collected and planted using existing agricultural equipment such as potato planters or bespoke planters. A planting depth of 5-10cm is recommended. Establishment costs are high.

The dry matter yield profile can be divided into two phases: a yield building phase lasting two to five years (depending on site and growing conditions), followed by a yield plateau phase. Experimental data comparing planting densities of 10,000 plants/ha and 40,000 plants/ha demonstrates that the additional yield achieved in the yield building phase from the higher plant densities did not justify the additional planting costs. Rhizome pieces must have plenty of buds, and be kept moist and at low temperatures before replanting. The optimal planting density is 16,000 plants/ha. Planting should be carried out in March or early April. It is important to plant early to take advantage of high soil moistures to ensure good establishment and facilitate the establishment of larger rhizome systems.

Consult a recent soil report to identify the soil’s available phosphorus (P), potassium (K) and magnesium (Mg). Miscanthus has a very low nutrient requirement. The plant has a good capability to relocate large amounts of nutrients into the rhizomes during crop senescence before harvesting. Over the winter period the leaves fall off the crop and there is a significant return of plant nutrients through leaf litter decomposition. Therefore, nutrient off-take by miscanthus is low, as the only nutrients removed are in the stems.

Further information is available in the Teagasc factsheet Nutrient Guidance for Energy Crops.

At present no fungicides, insecticides or nematicides are required in miscanthus production. Annual input of herbicides to miscanthus is also low and generally these are only required for two to three years after crop establishment. Following the establishment year, an annual spring application of a broad-spectrum herbicide may be needed to control grass weeds, such as annual meadowgrass and broadleaved weeds that grow early in the season.

Glyphosate has been used at Oak Park to good effect between the harvest and beginning of spring growth. However, considerable care needs to be exercised when applying glyphosate to control grass weeds. Application timing is critical and glyphosate can only be used when the crop is in its dormant phase. Recent research has suggested that topping in mid January to mid February, followed by glyphosate application within three weeks, can control grass weeds without having an adverse effect on miscanthus. Spraying of glyphosate should be completed by mid March. The precise timing of glyphosate application may vary in different parts of the country and agronomic advice should be sought in all cases.

After the second year from establishment, weed competition is often suppressed due to the leaf litter layer on the soil surface, which acts as a barrier to weed emergence. Herbicide dosage per hectare can be reduced significantly by band spraying and use of mechanical inter-row cultivations. The combination of band spraying and inter-row cultivations can be attractive, especially in the year of crop establishment when herbicide dose can be reduced by as much as 70-75%. The Department of Agriculture, Food and the Marine (DAFM) Pesticide Registration and Control Divisions (PRCD) lists the off-label recommendations for herbicides on miscanthus. Farmers undertake any risks associated with their use and caution is advised. 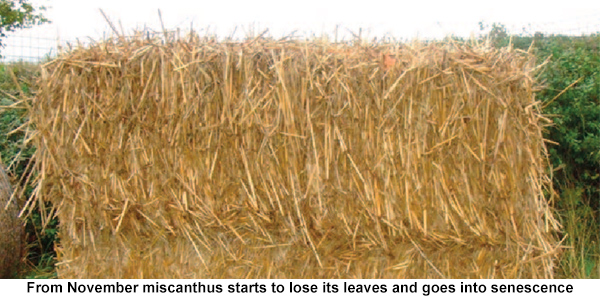 Miscanthus is generally harvested from February to April when the moisture content of the material is at its lowest. Harvesting has been carried out at Oak Park using a self-propelled precision chop maize harvester. An alternative method is to use a conditioner mower. Moisture content at Oak Park harvests has ranged from 27- 35% depending on season and harvest date. The lower the moisture content, the higher the energy yield and bale value. The crop should be baled into large square bales 8 x 4 x 2 to facilitate transport. The bales must be stored under cover. 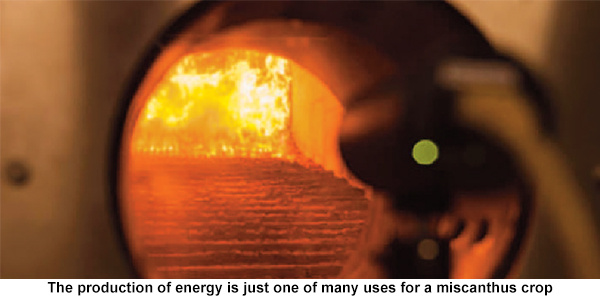 Miscanthus is a renewable source of fibre with a wide potential range of uses as biomass or fibre. These include decorative fencing, compressed board, insulating and packaging materials, paper, plant and substrates, and energy. The use of natural renewable fibres as substitutes for synthetic materials, which are based on finite petrochemical resources, has obvious advantages in the context of the environment and sustainability. However, farmers considering growing this crop should first have a profitable end use lined up as establishment costs alone are quite substantial. Consideration should now be given to help create supply chains from production to end use. To date, these key factors are not yet in place.