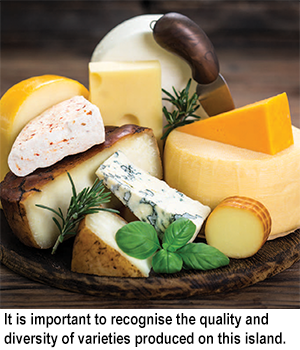 Farmhouse cheese making was a Gaelic tradition that disappeared from Ireland over the years. It was revived in the 1900s, and more specifically during the late 1970s, when a few enterprising dairy farmers commenced making farmhouse cheese. For at least a quarter of a century before this, cheese making in Ireland had been exclusively confined to large-scale factory production.

Nowadays, with the increased interest in locally sourced food, produced on a small scale, many dairy farmers are exploring different options for their milk. One of these options is the possibility of manufacturing farmhouse cheese. This involves the conversion of local milk into a range of cheeses, which can be sold locally, as well as distributed around Ireland and exported abroad.

As this farmhouse industry grows, both in reputation and numbers, it is important to recognise the quality and diversity of varieties produced on this island. Currently, we have over 60 farmhouse cheese producers (2020). Competition and the success of our cheeses at home and abroad has lifted the sector to new heights. CAIS is the umbrella group for Irish farmhouse cheesemakers and can offer a lot of advice and assistance to anyone exploring this opportunity.

Traditionally the market for our cheese has been on the home front, but this has changed considerably in recent years. As a country, we import over €240m worth of cheese and export cheese to the value of €800m per annum. Our farmhouse cheese production accounted for 2,700 tonnes in 2019, with sales totalling €27m. The UK is our largest export market, followed by the US and Europe. Our markets abroad are ever expanding. Fresh, healthy green pastures are the key to producing the highest-quality cheese. They are what give our cheese, and other dairy products, their distinct, unique taste.

The manufacturing of farmhouse cheese involves the concentration of the solids in the milk, by removal of the whey or liquid portion, followed by the shaping of the solid particles (or curd) by placing them into moulds. This is done by adding an ingredient called rennet to the milk, which sets it. This is then cut into cubes. The curds and whey are separated by straining or pressing. The cheese, depending on the variety, is then left to mature. 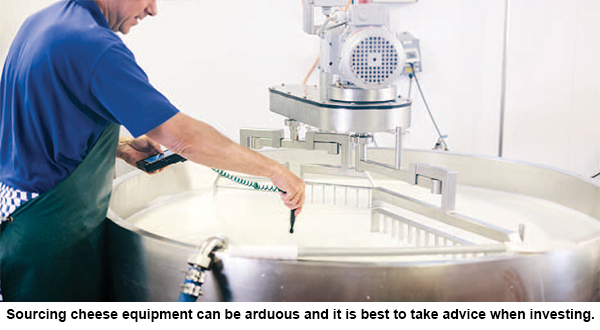 Milk: good-quality milk, free from antibiotics and with a low somatic cell count, should be used to make cheese.

Ripened milk: the addition of lactic acid (starter) bacteria to the milk starts the fermentation process, where lactose (milk sugar) is converted into lactic acid, which lowers the pH and helps to assist the coagulation process. After inoculation with a starter bacteria, the milk is usually held for 40-60 minutes at a temperature of 28-30°C (higher for some Swiss-style cheeses). This ensures the bacteria are active and the development of acidity has begun. Note: mould may also be added at this stage for blue and white mould cheeses.

Coagulum: enzyme coagulation is brought about by the addition of rennet, which contains an enzyme called chymosin, can be either vegetarian or of animal origin.

Curd treatment: after coagulation, the firm curd is cut into small cubes. This increases the available area for whey to be released. This release of whey (syneresis) is further driven by a cooking stage, where the curds and whey are heated gradually. This causes the protein to shrink and also helps to increase the activity of the starter bacteria. When the curds have reached the desired acidity and moisture, the whey is drained off. After whey drainage, the curd handling varies from cheese to cheese. The curds are then salted, either directly in the vat (e.g., Cheddar) or after pressing (e.g., Gouda). Curds and whey are heated and stirred.

Place curds in moulds: they are then pressed to give the final shape, usually circular or rectangular.

Ripening: with the exception of fresh cheese, most cheeses are ripened or matured for weeks or months at specific temperatures and levels of humidity. During ripening, the salt moves through the cheese adding to the flavour and preventing the excess growth of bacteria. The starter bacteria release enzymes, which degrade the fat and protein, resulting in flavour development.

Packaging: cheeses are packed in many different ways. Some are waxed with a paraffin wax, others are coated with a plastic layer, and others are wrapped in foil or parchment. The function of the packaging is to protect and preserve the product en route to the consumer.

Equipment: Sourcing cheese equipment can be arduous and it is best to take advice when investing. Companies such as Rademaker and C. v’ant Riet Dairies in Holland, Jaap Jongia in the UK, and Asta Eismann in Germany have a great deal of experience. A 500L cheese vat will return 55kg of hard cheese. Over 40 weeks, this will use 20,000 litres of milk, resulting in 2,200kg of cheese. These figures relate to production on a one day per week basis.

If production is increased to three days per week, you will use 60,000 litres of milk, giving 6,600kg of hard cheese, with costs and returns as follows:

Adherence to hygiene principles is critical during the manufacturing process, to ensure a safe product for consumption. It is recommended that anyone considering cheese making undertake a basic food hygiene training course.