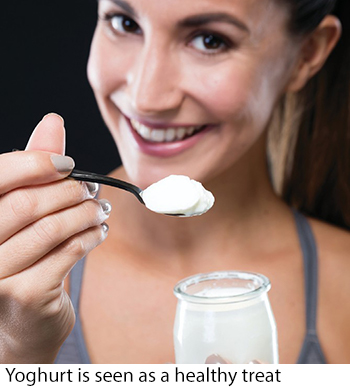 Yoghurt is a fermented milk, which has its origins in Eastern Europe but is now consumed throughout the world. The French called it the milk of eternity, as it was believed to have therapeutic powers and give long life to those who consumed it. France is the leading consumer of yoghurt in Europe, followed by Ireland, with the average person consuming 21.3kg and 13.2kg per annum, respectively. The yoghurt market has been growing steadily in recent years, benefitting from yoghurt’s image as both a healthy alternative for snacking or meals, and also as a treat or dessert. Health and wellness trends have driven the growth of naturally lower- sugar varieties such as Greek yoghurt, fat-free yoghurts, high-protein products, as well as increased offerings in cholesterol-reducing and added-nutritional value yoghurts. The demand for dairy-free and plant-based products is also growing, and this demand extends beyond traditional vegetarian/vegan consumers. High-value growth has been observed in sour milk products, largely due to growing demand for kefir (a fermented milk drink), a trend noted in markets other than Ireland as well.

The production of yoghurt is a relatively simple procedure. Milk, which can be fortified with milk powder to give a thicker product, is pasteurised, cooled and inoculated with starter bacteria, which ferment the milk, causing it to clot or gel. The differentiation in yoghurt formats is due to changes in the production method.

The starter cultures used for most yoghurt production are a mixture of Streptococcus thermophilus (ST) and Lactobacillus bulgaricus (LB). Although they can grow independently, they are symbiotic and the growth rate and acid production is better if they are grown together. These bacteria are ultimately responsible for the flavour and aroma of the final product. To achieve this, they produce a number of products, such as: 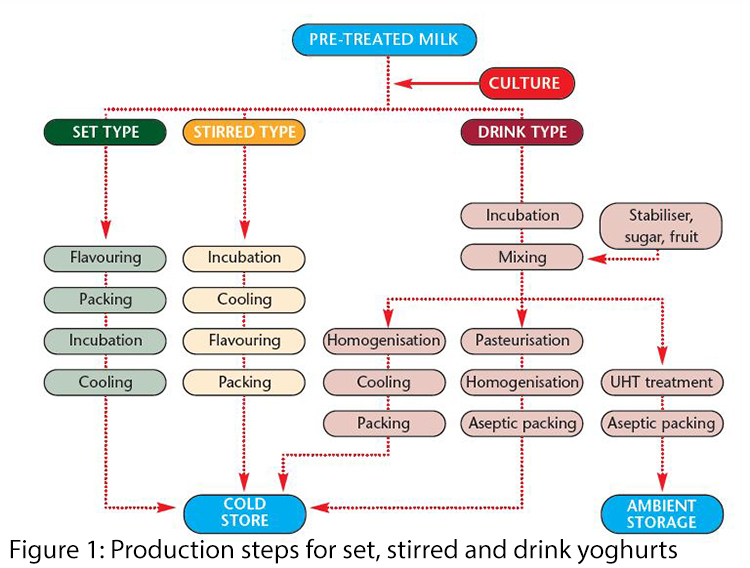 Skimmed milk powder is usually added to improve solids content and the texture of the final product.

Milk is heated to 90˚C for five minutes, which denatures the protein in it. This helps to increase viscosity and improve mouthfeel (texture).

This step disperses any fat present and helps to dissolve milk powders, while improving mouthfeel.

Milk is then cooled to 38-42˚C, the optimum temperature range for the growth of bacteria.

Use a blend of Streptococcus thermophilus (ST) and Lactobacillus bulgaricus (LB). They consume the milk sugar (lactose) and convert it to lactic acid and distinctive yoghurt flavour compounds.

For optimum growth of bacteria, the temperature should be held uniformly for four to six hours to ensure a nice, thick flavoursome product.

Once a pH of 4.5 is reached, the yoghurt coagulum needs to be cooled to less than 30˚C to stop excess acid production.

After mixing these into the yoghurt, it is important the mixture is chilled without disturbing it to give maximum texture and flavour.

Packed yoghurt, in whatever form, should be stored and transported at less than 10˚C, but preferably below 5˚C. This slows down the biological and biochemical reactions, and hinders the growth of potential contaminants, such as yeasts and mould.

In practice, chilled water is circulated through the mixing vat jacket for 30 minutes prior to slow agitation (<20rpm), until the temperature reaches 25˚C. Fruit is then added before filling. In batches, the fruit or juices can be chilled prior to addition, and this will help to bring down the temperature of the mix. In a farmhouse situation, it is recommended to have a slightly lower incubation temperature (38-40˚C), as this will give you more control at the cooling/filling stage 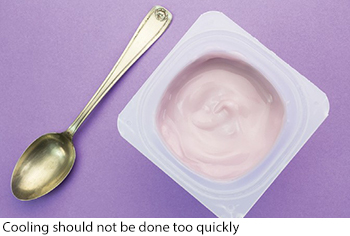 Cooling commences as soon as pH 4.5 is reached and a gel structure is clearly visible. At this stage, the yoghurt is very fragile and the product should not be handled if at all possible. Pots or containers can be cooled by blowing cold air around them continuously. If cooling is done too rapidly, then a layer of whey may be observed on the surface, due to the quick contraction of the gel. A more practical solution is to cool rapidly to 35˚C in approximately 30 minutes, and then to cool to 15˚C over a further 45-minute period. The yoghurt can then be packed on pallets and moved to a standard cold store for continued cooling to less than 5˚C over 12 to 24 hours. This should ensure an excellent gel, with no visible whey on the surface