Presently about 2.5% of Ireland’s electricity generating capacity is in the form of hydropower. The national greenhouse gas emissions avoided from using hydro as a form of renewable electricity is 283 kilotonne (kt) CO2. The Ardnacrusha hydroelectric station, built in the 1920s, is still the country’s largest renewable energy-generating unit.

Hydroelectricity is derived from the power harnessed from the flow of falling water, typically from fast-flowing streams and rivers. There is no international agreement on the definition of small hydropower. In Ireland, “small” refers to an upper limit capacity of 10 megawatts (MW). Small-scale schemes (under 10MW) are usually operated by private developers and small companies.

Hydropower requires the source to be fairly close to the site of power usage or to the national grid. The turbine converts potential energy stored in the flow of water to produce electricity. The lack of a default purchaser of all renewable energy supplied to the network is the main deterrent to developing small-scale hydro generation. The ESB fulfilled this function until 1994. Start-up costs are high, but after the initial payback period, the developer is rewarded with power production from a ‘free fuel’ at relatively low operating costs. 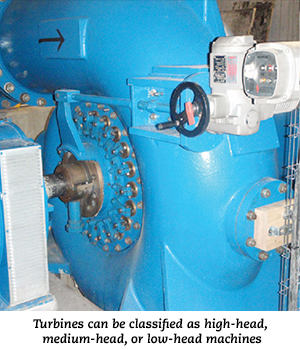 Small-scale hydro is a useful way of providing power to houses, workshops or villages that need an independent supply. Considerable unexploited hydropower potential exists in Ireland at the small to micro-scale level. The electricity generated can potentially be supplied to the local community. Surplus electricity can be sold to the national grid. By investing in a small hydropower system, it is possible to reduce exposure to future fuel shortages and price increases, and help reduce air pollution.

Improvements in small turbines and generator technology mean that “micro” technology (under 100 kilowatts (kW)) hydro schemes are an attractive means of producing electricity. As a result, much focus nowadays is on small developments. The likely range is from a few hundred watts (possible for use with batteries) for domestic schemes, to a minimum of 250kW for commercial schemes. Another option is to refurbish old buildings (for example sawmills) to generate electricity. 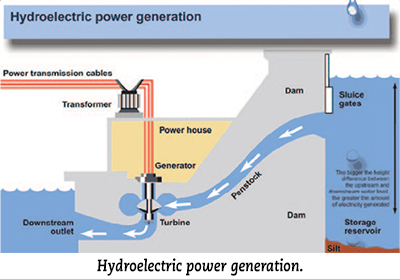 A sufficient quantity of falling water must be available. Determine the amount of power that you can obtain from the flowing water on your site. The power available at any instant is the product of what is called flow volume and what is called head. The best sites have a reliable water supply year round and a large vertical drop in a short distance. A rough estimate of the power available at a specific micro-scale site can be calculated from the following equation:
Power (kW) = 6 X head (m) X flow (m3/sec)
Head = the vertical flow of the water, essential for hydropower generation.
Flow = volume of water passing per second.
Note: Heads less than 2m are liable to be uneconomical.

If the potential output of a scheme is attractive, then one needs to be certain that permission will be granted. It is wise to commence informal discussions with planning and fishery board authorities early on in the assessment to get a better feeling for their attitude towards the project. The relevant local authority will decide if an environmental impact assessment (EIA) is required. An EIA is carried out at the project proposal stage to determine if an environmental impact statement (EIS) is required. Most proposed small-scale hydro schemes would have an output well below 20MW and may not impound any water. A change in 30% of mean river channel flow is likely to occur and it is in this context that an EIA is required.

Environmental effects must be considered (the effect of the dam on fish, flooding and so on). Turbines can have a visual impact and produce some noise but these can be mitigated relatively easily. The main issue is to maintain the rivers ecology by restricting the proportion of the total flow diverted through the turbine.

4 - Determine proximity to the electricity grid

The distance from potential sites to the nearest suitable connection point on the grid should be estimated and the cost of same. It is important to determine to whom the power will be sold. The electricity generated by a scheme may be used at the point of generation, in place of electricity supplied by the ESB. Alternatively, it may be exported via the national grid. Presently, any new generator into the network must secure their own customers and buy any surplus at unpredictable prices. Therefore, it is financially advantageous to consume as much power as possible onsite and only export the surplus into the network.

Economics dictate the feasibility of a hydro plant. The economic viability of a hydropower development is highly site specific. Generally, a hydro system requires substantial initial capital investments and relatively low operating costs. It is considered that the location and site conditions determine a significant amount of the development cost. The final point is to calculate the cost per kilowatt hour (kWh) produced by the hydro plant. In this order, an estimated cost of building the plant at the site, the annual cost of the plant, and all other costs must be done.

The next step is to design and effectively build the plant. The major steps involved include: 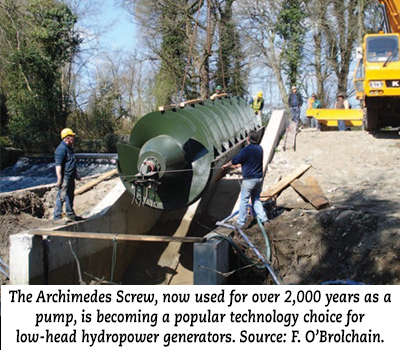 Most of the development cost is determined by the location and site conditions, with the rest being the cost of manufacturing the electromechanical equipment. Initial costs may be high due to strict environmental regulations. To generalise however, it is estimated that production of electricity from small-scale hydro would range from 0.07- 0.15 cent per kWh, depending on the distance to the gridline. A large proportion of the capital costs are associated with the civil engineering works and for plants in remote locations, grid connection charges can also be significant. 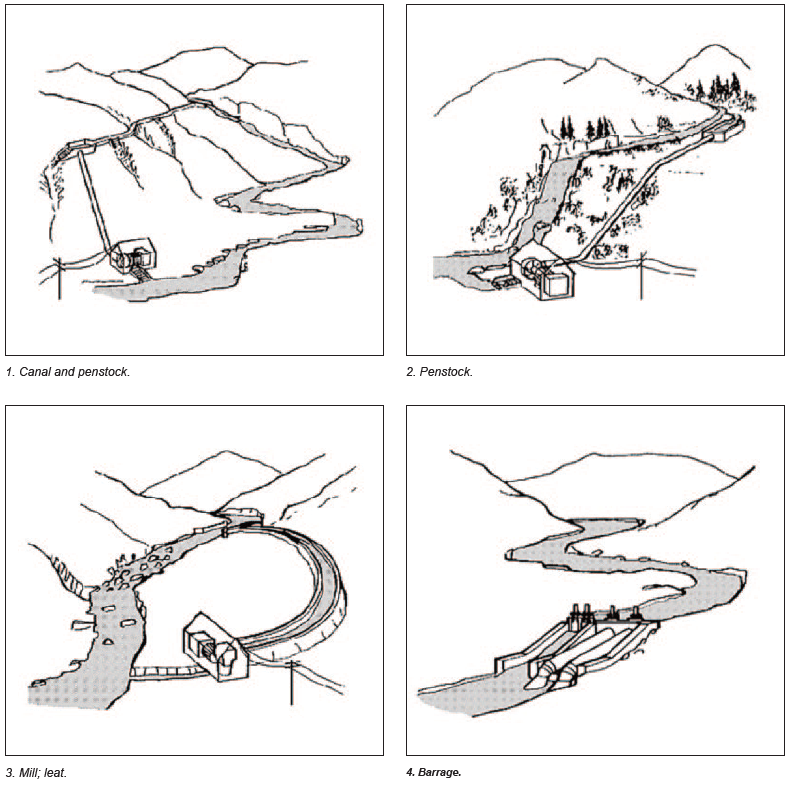