Willow can produce large quantities of renewable green energy. Growing willow for energy contributes to sustainable development in rural communities. Willow yields a fuel that can be stored until needed, and then used to generate heat and/or electricity. Proposals for binding greenhouse gas reduction targets for EU member states indicate that by 2030, Ireland will be required to reduce its emissions by 30% relative to the 2005 level.

Emissions from Irish agriculture currently constitute 33% of total national emissions. Energy crops are generally high yielding and carbon neutral. During photosynthesis, the plant takes or captures CO2 from the atmosphere to build its body. The carbon atoms within the plant’s structure were CO2 gas last year, last week or even yesterday; therefore, the plant or biomass makes its structure from CO2 and in essence locks up that CO2 within its structure. The CO2 is now effectively stored in the plant tissue. 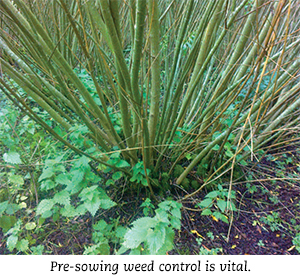 Most agricultural soils with pH in the range of 5.0-7.0 will produce satisfactory willow coppice growth. However light sandy soils, particularly in drier areas, will have a problem with moisture availability and highly organic or peaty soils should be avoided as initial weed control, which is vital, will be extremely difficult. Medium to heavy clay loams with good aeration and moisture retention are ideal, although they must be capable of allowing a minimum cultivation depth of 200-250mm to facilitate mechanical planting. Boggy sites are not suitable as this can hamper harvesting, which is carried out in the winter.

Willow coppice requires more water for its growth than any other conventional agricultural crop and hence requires a good moisture-retentive soil. Areas with an annual rainfall of 900-1,100mm are best or areas where the crop has access to ground water. The crop can tolerate occasional inundation, but this may have implications for harvesting. 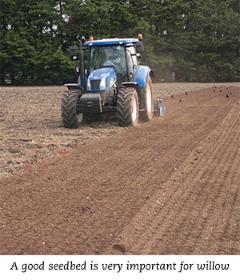 Willow should be planted in an excellent seedbed, as there is little chance of rectifying problems when the crop is sown. Plough pans, which can develop under tillage systems, should be removed by subsoiling before planting. Aim to establish a consolidated seedbed with a fine tilth. It is generally recommended that a power harrow be used prior to planting to achieve the desired seedbed. Willow is very palatable to rabbits, hares and deer.

Fencing should be completed before the crop is planted where a problem is anticipated. Fencing is the best method of controlling rabbits. There is usually no need for further control when the willow plantation is established.

It is strongly recommended that perennial broadleaf and grass weeds be controlled with glyphosate before sowing. Control after planting can be difficult and expensive. Plantations are sown with 15,000 cuttings/ha. These are sown in a twin-row arrangement. This twin-row spacing allows machinery to pass through. The spacings are generally 0.75m between the rows, 1.5m between twin rows, and 0.6m between the cuttings.

To ensure correct crop nutrition it is essential to have a recent soil analysis report before planting. Consult this to identity the soil’s available phosphorus (P), potassium (K) and magnesium (Mg). Where soils are low (Index 1) in P and K at planting time, an organic source of P and K should be incorporated into the seedbed. Nutrient advice is summarised in Table 1.

Opportunities also exist for growers to charge a gate fee for spreading waste materials like brewery waste and sewage sludge on their willow plantations. Further information is available in the ‘Teagasc Nutrient Guidance for Energy Crops’ spreadsheet.

Harvesting is carried out from December to April and whilst the root system of the growing coppice will support the harvesting and extraction equipment on the coppice site, hard access is required to the site. Slopes in excess of 13% will be difficult for harvesting machinery, particularly in wet conditions and should be avoided.

First-year growth can be as much as 1.5-2.0m. This growth is often cut back to ground level in the winter to encourage more shoots to grow (coppicing), although this can be eliminated if the crop is growing well. Generally, four to eight stems will start to grow in year two. Growth in the second year can be as high as 2-2.5m and a final height of 8m can be expected at harvest.

Rust (melampsora) is the major disease of willow. A severe attack can reduce yields by 40% and in some cases kill plants. Rust can change populations over two to three years and a resistant variety of willow can become susceptible. It is therefore essential that all plantations are sown with at least five to six different willow varieties to prevent a devastating attack of rust.

The blue and brassy willow beetle can cause significant problems, particularly after mild winters. Control is possible but it can be difficult due to the structure of an advanced willow plantation.

Local market access is vital as the bulk density of the crop is low and becomes unprofitable with high transport costs. The best economic return is for groups of farmers to develop local markets. Supply of these markets can be organised by the farmer groups and payment for the chips paid directly through either a payment per tonne of chip or per unit of heat used.