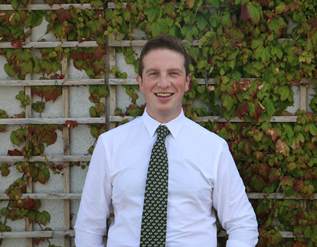 Conor Wixted grew up near Sixmilebridge in Co. Clare with a deep-rooted love for horses. As children both Conor and his sister, Aisling, were lucky to have some really good ponies such as 12hh hunter pony “Paulank Windstorm” who won many classes, championships and supreme titles including Irish Pony Society ‘Pony of the Year’, “a pony of a lifetime who sparked in me a passion for showing.”

Conor recently joined the Bloodstock Department at Goffs in Co. Kildare where his role predominantly involves processing entries and nominations, but also assisting vendors and clients and liaising with the inspection team. Sales days involve the responsible jobs of bid spotting and working with the veterinary panel. “Having personal experience as a vendor myself gives me a better insight into the needs and pressures facing vendors before, during and after each sale” says Conor.

Already a Bachelor of Business in Rural Enterprise and Agri-business graduate, Conor is also undertaking a part time Master’s study in Supply Chain Management with the UCD Michael Smurfit Graduate Business School to develop his procurement, management and networking skills.

At home in Clare Conor owns a National Hunt (NH) two year old filly (Youmzain X Shesafoxylady) and a half share in a NH yearling (Order of St George X Sincere Gesture). Both fillies were purchased as foals aiming to sell again as three year olds. Conor appreciates the help and support of his family to sustain this enterprise. His first broodmare was a daughter of ‘Yeats’, own sister to a listed placed filly and half-sister to a listed and four-time winner. Unfortunately both she and her foal were lost earlier in 2021 due to foaling complications, a tough experience when starting out as a young breeder. Conor says “this incident hasn’t put me off breeding but given commitments to work and college presently I will hold off to invest in some nicely bred flat mares in the future, all being well.”

There have been highlights in the journey also and one of those was selling a three year old earlier this year for £28,000 to highly regarded agent Matt Coleman of Stroud Coleman Bloodstock at the Doncaster Goffs UK sale who had been purchased 15 months earlier for €7,500. For Conor it is important to “enjoy being involved, appreciate the little things and embrace the journey because it can be hard getting started.” 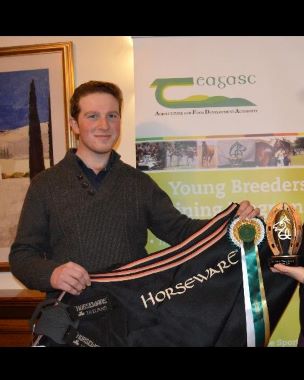 Conor first attended young breeder training as a 17 year old with the aim to learn more about conformation as he really loves showing and aspired to becoming a show judge, which he has since achieved being listed as a qualified judge on the Irish Shows Association judge’s panel. Conor credits “all I learned attending young breeder training without doubt stood to me during the judge’s assessment.” The training days provide “a chance to visit some of the top breeders and producers alongside experienced and generous trainers, giving a source of invaluable information you wouldn’t get anywhere else.”

Conor was exceptionally close to being selected for team participation at World Championships on more than one occasion, but remembers “winning the overall senior section of the National Young Breeders competition in 2019 as a moment of happy achievement and validation of work done to prepare.” Conor also says “the programme is a fantastic way to get to know others, make friends and also useful contacts. It has given me confidence in my abilities to assess conformation and athleticism and an encouragement to put myself out there.”

His advice to others is to “get as much experience as you can. There are great people in the sector willing to share their experience and all sorts of opportunities surface along the way. I’m still very much learning and spent some time doing night foal watch at Rathmore Stud during the Spring having experienced difficulties with my own mare. I also learnt lots shadowing bloodstock agent Gerry Hogan at the sales last year. It is interesting to take on different perspectives, before formulating your own.”