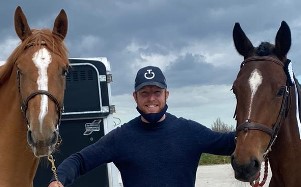 David is based in Enniskerry in Co. Wicklow where he grew up with a love for ponies, while learning and progressing through the Bray Pony Club. For David horses are his hobby, but also a very important aspect of his livelihood. He runs ‘Enniskerry Horse Farm’ a livery yard with 22 clients and a complimentary sheep farm (150 breeding ewes). David, always with his mind on the future, erected a 50x80m indoor arena earlier this year to compliment the two existing outdoor arenas.

His passion really shines when speaking of his breeding enterprise which began in 2008 when he covered his then pony club and eventing mare, Enniskerry Tigerlilly (ISH) [TIH] (Cult Hero x Garvagh Boy), with French Buffet xx producing the filly Enniskerry Foxtrot (ISH) [TIH]. Enniskerry Tigerlilly was an all-rounder who according to David “moved well enough to do a good dressage test, jumped bravely and was a machine across country”.

2009 was a lucky year for David as he also won team bronze at the Young Breeders World Championships and an outstanding individual 4th place.  In 2010 full brother to Enniskerry Foxtrot, Enniskerry Nadal (ISH) [TIH] was born. David produced these under saddle, and both have competed at CCI3*-S level. David’s proudest moment was warming up on his home bred pair in the same arenas as multiple Olympians Andrew Nicholson and Andrew Hoy while reflecting on the journey it had taken to get there.

Talking about his breeding philosophy David is pragmatic, focused, and very passionate. The ambition is to continually upgrade the quality of horses to ride himself, acknowledging that it is also a lifelong project to continue improving year on year from the beginnings in 2008. There are now three broodmares on the farm.  The ultimate aim, like for many other breeders, is to produce a 5* performer.

David is really excited about a three year old filly, Enniskerry More Coffee (ISH) (Vigo D’Arsouilles x Askoll Defi Platiere) out of Enniskerry More Joyous (AES). He believes she is special and will produce jumpers so hopes to take embryos from her while continuing her education under saddle. Having presented both Enniskerry More Coffee, and Enniskerry Quickstep (ISH) [TIH] (Loughehoe Guy x Cult Hero) another daughter of Enniskerry Tigerlilly, at the 2021 H.S.I. mare inspections both received ISH Select Status** and provisional one star jumping status. The plan is to produce both further through the young horse classes under saddle. David really appreciates experiencing the results of his breeding programme competing the offspring himself, collating the knowledge on their traits from one generation to the next and looking to improve each generation with appropriately considered stallion choices. He now has two foals from Enniskerry Foxtrot produced via embryo transfer the 2018 Enniskerry Bolero (ISH) by Balou Du Rouet (OLD), 2020 Enniskerry Freestyle (ISH) by Jenson Van Het Meelenhof (BWP) and 2021 Enniskerry Tango (ISH) by Nixon van’t Meulenhof (BWP). 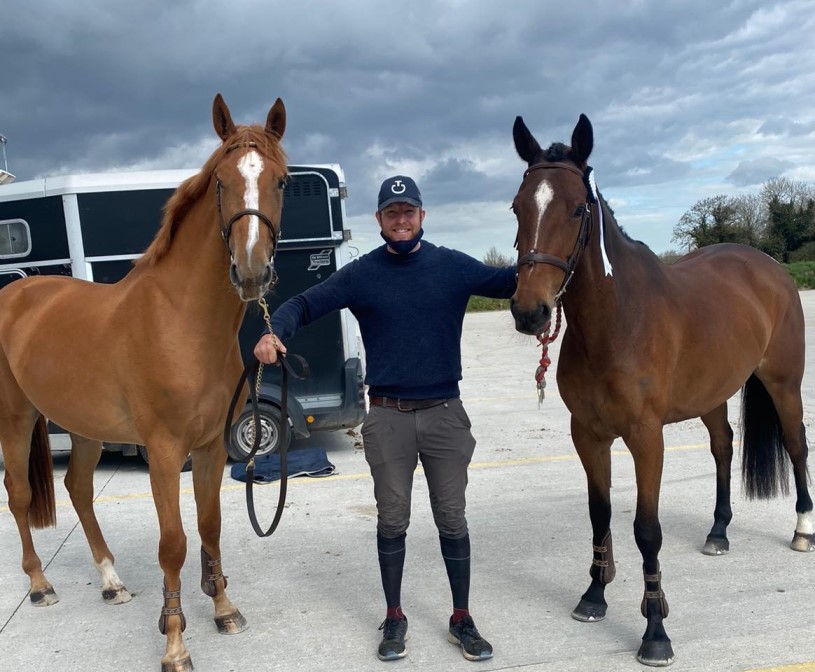 David the ‘young breeder’ journey gave him “the confidence and tool kit to objectively assess his stock, stand back and be critical”. Contacts across Europe with young people he met at the World Championships in 2009 have sustained to this day and with some he discusses stallion choices and other topics from time to time. David has maintained contact over the years with Teagasc, attending many events and continues to be hungry for information and to grasp “every opportunity to share knowledge and interact with others who have a similar passion”.

**Mares aged 3 years and older that have met the requirements to be classified as SELECT in the ISH Studbook can have their athleticism assessed through loose jumping to receive a 'One Star' rating in ‘Showjumping’ if they achieve a score of 80 or higher. Mares that are classified as SELECT are eligible to receive additional merits based on the Horse Sport Ireland star rating system for mares. Star ratings range from one star to five stars based on the mare’s own performance or her progeny/damline performance.