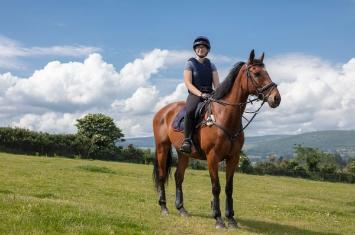 Michelle hails from Sandyford in Dublin. Although home was very much an urban environment and a short trip to the conveniences of the city life, her Mum Bernadette’s family lived not far away in Glencullen. Her Mum, previously travelled to the 1988 Summer Olympics in Seoul as a groom with Jack Doyle showjumper, and also used to run Carrickmines Equestrian Centre. Michelle therefore spent much of her childhood in the countryside in Glencullen while attending crèche at Carrickmines Equestrian Centre. From the time she was a baby the environment to which she was exposed must have instilled a love of all things equestrian as in her own words she was “reared at the riding stables”. Her Dad, John, also had a hobby interest in horses and encouraged her involvement. Her parents are re-locating to a newly acquired small farm in Co. Tipperary with a few stables so the next chapter of rural living awaits. 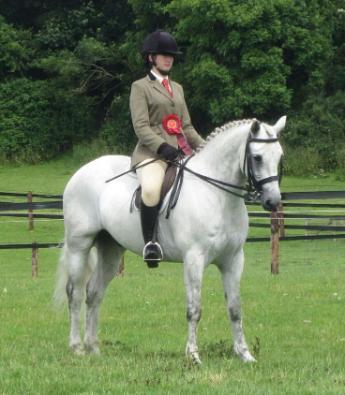 Michelle first started riding at six years of age. Her Mum’s cousin loaned her “a very nice retired show hunter pony who had previously suffered a tendon injury and therefore could only be ridden on the flat”. From the age of 12 years she was also involved in a few half liveries with some of the ponies at the centre and so began to broaden her riding experiences.  At age 14 she finally convinced her parents to purchase one of the ponies which she subsequently competed in pony club, showing and in show hunter classes with. This pony 'Omey Darlin' was awarded champion pony at ‘Flavours of Fingal County Show’ and highly commended at ‘RDS Dublin Horse Show’ in the 153cm show hunter class in 2016. The pony was subsequently sold to a younger rider in 2017. Michelle is “very proud that he has since acted as a schoolmaster for his new rider who has progressed to jumping horses in 1m35 classes which is wonderful to see”.

Additional to caring for her own pony over the years Michelle was regularly called on to school new riding school ponies/horses; or to help other owners having issues with their horses/ ponies. “Summers were always busy with three or four to ride as well as my own, spending a lot of time schooling young, green horses. Michelle was fairly sure she wanted a career with horses in some way and following a visit to the College of Agriculture Food and Rural Enterprise (CAFRE) Enniskillen Campus open day opted to apply for their ‘BSc (Honours) Degree in Equine Management’ to which she was accepted in 2019 and is now in her final year and mid dissertation preparation for which she has chosen to undertake a study titled “Does the method of transport impact horses experience while travelling, with the aim to investigate if the method of transport influences the horse’s stress levels based on heart rate analysis when comparing a 2-horse van and a jeep and trailer”.

Michelle is challenged with dyslexia, a learning difficulty affecting reading, spelling and comprehension of text. For this reason Michelle wasn’t initially convinced that college would be her chosen route to a career. However, on realising the first two years of the degree involve a lot of practical assessment this was a huge attraction. Michelle is looking forward to the possibility of succeeding in application for an internship to Kentucky after graduation as Covid disrupted these opportunities during the normal study period. She is open to completing that in either a sport horse yard; racing/thoroughbred breeding yard; or veterinary establishment and feels it is “important to experience the industry abroad, different approaches, and to see a bit of the world away from home.”

Michelle and her family have not been actively involved in breeding to date and she didn’t think that was something she would consider. Though it has been pointed out “for someone who isn’t into breeding, you do talk about it a lot”, so it remains a possibility. With the move to a new rural base with a bit of land and a few stables the idea of “breeding eventers or show horses may become a reality sooner than originally thought. Being involved in young breeders has definitely nurtured my interest.”

Michelle’s first interaction with the Young Breeders Programme wasn’t exactly ‘love at first sight’. She admits to being “quite overwhelmed, feeling a bit lost, and not really understanding what was going on” at her first training event as there was “a big group and most of the others seemed to know what they were talking about while I had no concept of discussing conformation, movement or jump.” Her first instinct was “I’m not going back, it’s not for me” yet two years later having sold her pony and on the hunt for a new horse she decided she “wanted to be more educated about how to assess a horse and didn’t want to make any silly mistakes buying or waste money” and therefore decided to return to training. 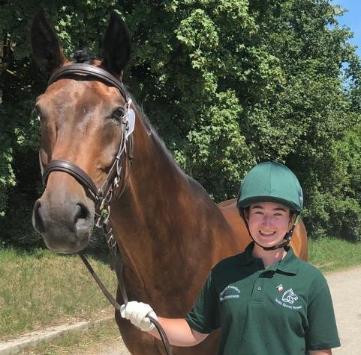 With renewed motivation and a different purpose the experience had an entirely different outcome. Michelle attended two training events before partaking in the National Competition in 2016 having been encouraged to give it a go though not feeling terribly confident about it. Michelle admits to having been“very shy, reserved, and not keen to talk or ask questions, preferring to try and hide at the back”. But, with encouragement and not being allowed to hide, while learning more, her confidence grew and she admits “this benefitted me in the long run, I don’t fear presenting or speaking in front of others now, once I have knowledge in what I am talking about.”

Michelle pictured above before the In Hand phase of the 2019 WBFSH Young Breeder World Championships in Austria.

Michelle was not in the first cut for World Championship selections that year, but due to unavailability of another selected individual she earned a place on the selection training. Though not making the team on that occasion she says “the experience and what I learned during selection training was fantastic, especially in a smaller group. With support from the trainers and reader support for the theory tests my confidence just grew and grew. I went with new confidence to the National Championships 2019 which paid off as I was second in the Junior section. I made it through selection training to the team for the World Championships in Austria that year. I was so proud to be placed 5th during the ‘In Hand’ discipline of the championships in Austria with such strong competition.”

When asked to advise others, Michelle says “don’t be intimidated by not knowing much initially. Stick with it and you will learn more. Try not to worry about anyone else there or feeling that others know more, they may just have had more experience or have been involved for a longer time. A bit of perseverance can pay off. I’m so glad I went back, though my first instinct was to run.”