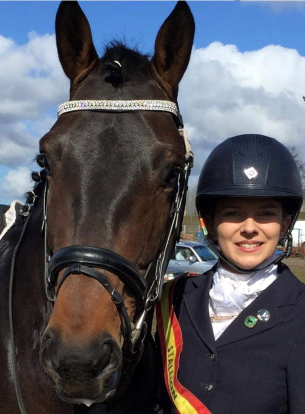 Sarah Brashaw lives near Newtownards in Co. Down where she has a yard of ten competition equines ranging from performance and show Connemara Ponies to show horses and cobs, young event horses and breeding stock at Ringcreevy Stud.

Sarah’s introduction to ponies began at two years of age when sat on a pony whilst holidaying with her family. Sarah became attached to a Shetland pony which “was the beginning of a lifelong obsession”. Not coming from an agricultural or horsey background herself Sarah persistently requested riding lessons for her fourth birthday, launching her mum into the world of equestrianism after that. Sarah stuck with the ponies, progressing onto horses. Sarah has won the 4&5 year old Connemara class and reserve champion at Royal Balmoral Show on a mare she broke and produced herself.

Sarah graduated from Ulster University with a Bachelors Degree in Sport and Exercise Science. Following graduation she continued to develop her riding skills and husbandry knowledge while working at competitive studs, thereafter being employed to manage a large livery yard with 35 clients. However, desiring to be academically challenged while incorporating her passion for equestrianism, she returned to Queens University Belfast subsequently graduating with a First Class honours in a Masters of Science in Animal Behaviour and Welfare. The Masters studies involved first of its kind research into equine subtle lameness, facial pain and early treatment with non-invasive techniques. Sarah awaits news of PhD funding to undertake further research based on initial findings with the objective to improve the welfare of horses in sport.

Sarah recently invested in two broodmares, while already owning two stallions Ringcreevy Commodore ISH 2013 (Ringcreevy Charlie ID x Rockrimmon Senator AES) and Ringcreevy Charlie ID 2010 (Cappa Cochise x Enniskeane Pride). Sarah purchased Ringcreevy Commodore as a foal from the stud she was working with at the time, producing him to achieve stallion approval by the Breeders Elite SIES studbook and also to compete in both National and International dressage classes with a top ten result at his first international championship and crowned preliminary champion at the Northern Ireland Dressage Winter Championships aged five years old. Sarah previously competed Rockrimmon Senator for several years and “wanted her own stallion just like him”. His first foals are awaiting in 2022. Sarah believes “it is important to be really critical of the physical horse and personality, not just the breeding on paper as even the best genetics without correct temperament or conformation are of little purpose.” Sarah is passionate about breeding rideability as “it is so important to have the correct mindset and attitude to work.” 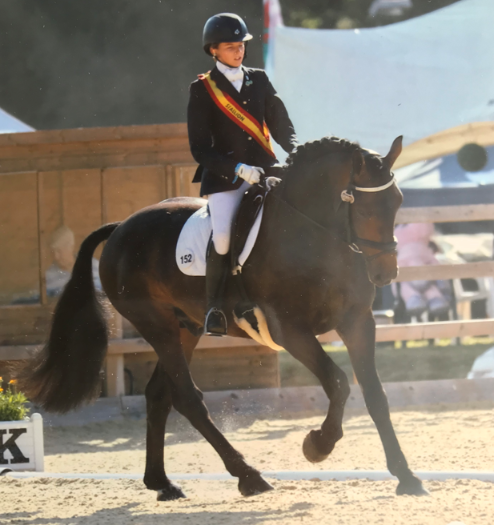 Sarah became involved in the Young Breeders Programme in 2018 having come across it on the Horse Sport Ireland website while researching information on stallion inspections. Thinking it might be useful to gain a few contacts Sarah decided to attend a training day. “I certainly had underestimated how much my involvement would alter my understanding of young horse selection. My mind was blown wide open on the details of assessing conformation, movement and performance. The ability to then marry this with my knowledge of limb biomechanics and physiology from my degree has revolutionised how I think about selecting horses.” Sometimes it is the simple tips that are most poignant and helpful: “Tiernan Gill always encouraged us to step back and look at the whole picture of the horse, and ask yourself do you like him/her? If ‘yes’ then that’s a good base to start the critique from.”

Sarah was selected to participate as a senior team member representing the ISH Studbook at the World Championships for Young Breeders in Austria 2019. “I had driven literally hundreds of miles around Ireland attending training and spent many hours studying the theory which thankfully paid off. Being a newbie to the world of breeding and not coming from an equestrian background just goes to show anyone can do it if they are willing to put the work in. I encourage all young riders and breeders to get involved as the knowledge sharing is truly priceless. The sense of team comradery is overwhelming and you have a super support network. I’ve made contacts with professionals and other young breeders that have become invaluable to me and hopefully also long-term friends.”

Embarking on a World Stage

Sarah also advocates for the confidence building aspect of the programme and how participants are encouraged to share their thoughts within the group of trainers and participants, a safe space where all questions and comments are respected. During the World Championships in Austria Sarah herself found the confidence to “take the mic raising questions to the judges in front of all the participants from around the globe relating to the judging of the athleticism phase. Participants from other studbooks thanked me afterward for asking the questions as they had similar thoughts but didn’t feel able to speak up. I’m proud that I was able to make a contribution on a professional world stage and be accepted.” During the assessment of conformation and athleticism phases young breeders are encouraged to raise questions relating to the initial ‘base horses’ whose scores are announced by the judges before the ‘competition horses’ are presented for judging.

Sarah says “the Young Breeders Programme impacted my life hugely. I am now breeding my own sport horses with my own mares and stallions which has been a life goal that I now have the confidence and knowledge to embark on. A deeper understanding of conformation and athleticism assessment also greatly helped not only my riding but also my academic studies regarding movement and its relationship to pain. If you have a passion for something, follow it and everything else will fall into place.”