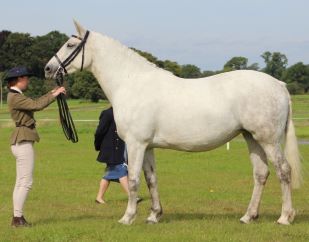 Sharon Mannion is based at Windgap Stud, in Doon, Co. Offaly having grown up in a family of eight. From a young age she participated in chores on the farm which historically comprised both dairy and sheep enterprises. There were always Irish Draught (ID) horses present, evolving to become the main enterprise today, now standing five ID stallions and a further twenty resident broodmares and followers.

In 2020 Sharon graduated from Athlone Institute of Technology with an Honours Business Degree (Equine Business). She works part time off farm in the area of insurance, while also playing a significant role in the management of the equine enterprise on the farm. All major decisions are made around the kitchen table as a family. Sharon and her brother Anthony foal the mares while also ensuring both mares and foals are in good health right through until weaning time. They also handle the stallions and subsequently engage frequently with other breeders from around the country. Sharon provides a show and sales preparation service, generating additional income.

Love for the Irish Draught

Sharon and her siblings were each allocated a mare to show by their parents when starting out in the show ring. Sharon was gifted Lackagh Windgap (I.D.) (Windgap Blue x Huntingfield Rebel) for this purpose and says “I wish she were mine, as in my eyes her movement is outstanding”. Sharon loves demonstrating her skills and participating in the show ring and is proud to be the third generation of the family to show the Irish Draught breed. She feels it is important to retain the breed and is very happy to make what contribution she can to its survival.

Sharon’s ambition is to “be as successful in showing and breeding horses as her parents and grandparents who have over the years sold many horses in Ireland, the U.K., mainland Europe and the U.S.A.” and wishes to continue to breed ID horses herself. She would “love to own Bannvalley Mandolin (Moylough x Annaghdown Star) as the grand dam, Roma Blue Wind, was bred by her grandparents Kieran Patrick and Mary Flynn. In Sharon’s words “to own my own Roma Blue Wind lines would be a dream come true”. Roma Blue Wind won the RDS Champion ID mare classes in 1995 and 1998. Her daughters Roma Silver Pearl, Millhollow Starlet and Ardattin Mandy (dam of Bannvalley Mandolin) subsequently all won RDS Mare Championships.

In 2012 Sharon was awarded a young exhibitor award by the Irish Draught Horse Breeders Association (IDHBA) as in her first year showing horses she had placed second at the National IDHBA Show. 2017 Lackagh Windgap was in the rosettes in Athenry show (also champion ID of the show), Tullamore show, Laois IDHBA show, Mount Briscoe Rare breed show, Loughrea Show, Wicklow IDHBA Show, Roscommon Show, Moate show and IDHBA National breed show. Lackagh Windgap’s three year old daughter by Western Blues had a successful 2018 campaign claiming championships at various shows and made her RDS debut. The Mannion family show mares, foals and young stock annually in non-Covid circumstances to support the local shows and promote the stock. Sharon completed the IDHBA judge’s course in 2018 having found the knowledge learned about conformation and movement at young breeder training useful in building on that gleaned from her parents and grandparents and sparking the interest further.

“Knowledge is power” and Sharon is “hungry for knowledge”. She loves “learning all there is to know about horses, their traits and abilities” and is always looking “both to improve and to share her knowledge”. Sharon’s own experience of the ISH Young Breeder training programme provided her with “a huge amount of valuable experiences and information through the various yard visits, talks and training sessions and the next generation are indebted to these yards, the trainers and organisers”. Sharon “attended a training session with Philip Scott and Tiernan Gill who, with the Teagasc team, gave a super detailed explanation of, and discussion around, the assessment of loose jumping traits which I found extremely beneficial when preparing Windgap Reliance (ID Class 1) for his stallion inspection.” Both Sharon and her brother Anthony through the programme are also “up to date with the terminology to use when discussing foals with potential clients and confident in their own assessment and valuation of the foals and other youngstock”.

For the future Sharon wishes for “the Irish Draught to retain its place both as a foundation breed and a desirable riding horse in its own right”. She is enthusiastic to play her role as a breeder and continue to build on her knowledge through whatever training days, courses, yard visits, and webinars are made available. 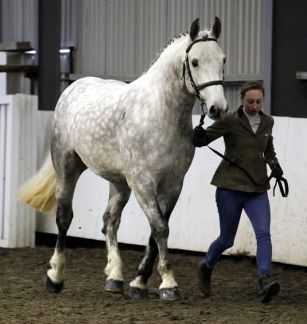