Ammonia levels can have huge impacts on quality of life and productivity for a bird. It usually considered a secondary issue when raising poultry.

Nitrogen is a component of poultry diets, via either protein or other sources. Some of this nitrogen can be used by the bird and is incorporated into tissues or eggs but most of it is excreted in the urine or faeces in the forms of uric acid (around 80%), ammonia (around 10%) and urea (around 5%). Once the uric acid and urea are excreted they are converted into ammonia through microbial and enzymatic breakdown via the bacteria and enzymes found in manure. After this process ammonia is readily released into the air as a gas that can be detected by both birds and farmworkers. Ammonia has a distinctive, pungent smell and is known for its irritating effect on the respiratory system, eyes and mucus membranes. Humans can smell ammonia at 20 parts per million (ppm) but ammonia can cause respiratory damage at 5 ppm.

Ammonia tends to congregate in low lying areas of the house and can impact the bedding, litter and the overall air quality in the hen house. The concentration of ammonia in poultry housing is exacerbated by environmental conditions, such as high temperatures and moisture as well as other factors like ventilation and stocking density

Factors that influence how ammonia is formed and released into the poultry house environment:

Factors that influence how manure bacteria and enzymes break down nitrogen to form ammonia:

Increased ammonia levels are a year-round problem but spikes tend to occur in the autumn and winter. This is usually due to the surrounding environment containing more moisture and because the cold weather often results in reduced ventilation.

In layers, it has been suggested that early exposure to ammonia could have a lasting effect and might impact how pullets perform later as laying hens. Additionally, chronic exposure to high ammonia concentrations may impair egg production for layers.

At a microscopic level researchers have found that exposure to ammonia can trigger changes within the animal. In poultry high level exposure to ammonia for 20 days decreased the intestinal surface area (possibly impacting nutrient absorption), decreased the birds’ resistance to oxidative stress, altered the intestinal tract’s ability to break down nutrients and compromised immune organs. Higher than desired ammonia concentration can lead to damage of the respiratory tract and eyes as well as negatively affecting immune development. In addition, wet litter can lead to contact burns and footpad issues.

The effect of ammonia gas on the mucosal surface of the trachea ranges from paralysis of cilia, to deciliation (loss of cilia) of epithelial cells, to injury (necrosis) of the mucosal epithelium itself. Cilia are tiny, hair-like projections on the surface of respiratory epithelial cells that line the trachea. They form part of the “mucociliary apparatus”. The mucociliary apparatus is responsible for entrapping and cleaning particles inhaled from the environment. Dust particles have large numbers of bacteria attached to their surface and poultry house dust has been shown to be a reservoir for pathogens, E. coli in particular. When cilia become paralyzed or are lost due to high ammonia levels in the poultry house, mucus on the mucosal surface of the trachea cannot be cleared, and thus entrapped pathogens on dust particles may reach the lungs and air sacs and cause infection.

If ammonia levels increase to 50 ppm (the level where human eyes start to tear up), chickens will quickly develop corneal ulcers and other vision problems. Ammonia does not directly injure the corneal epithelium, it causes damage to the basement membrane on which the epithelium rests and is responsible for detachment of the epithelial layer, which is the characteristic eye lesion that results from excess ammonia exposure. The lesion is an almost circular, grey-white, opaque, rough-looking area in the centre of the cornea. ( see picture 1 below) These birds are partially to completely blind. By the time ammonia levels are high enough to cause blindness, the birds have already lost a significant amount of weight and feed conversion. 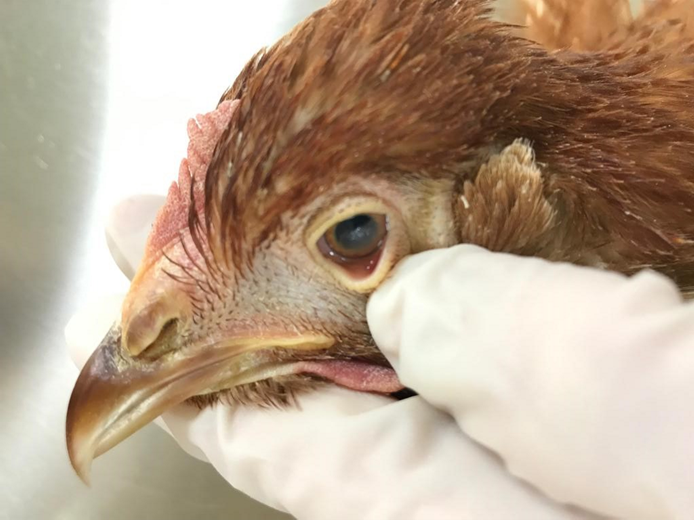 Histologically, the corneal lesion is an erosion in which there is separation and loss of the corneal epithelium from the underlying basement membrane in the central cornea as depicted in the pictogram below

Keeping the poultry house well ventilated is a critical component in ammonia management. On the commercial side of poultry production facilities are designed to allow laminar flow, negative pressure or air exchanges to prevent ammonia build up. This method does not, however, reduce or inhibit the formation of ammonia. Nevertheless, maintaining appropriate ventilation during all seasons will help reduce the gaseous ammonia levels in the barn and keep the litter dry.

Faecal nitrogen levels can increase if the bird does not properly break down and absorb the protein in the feed. This can happen if the bird’s diet features too much complex protein, if the bird is sick or if its gastrointestinal tract is not functioning properly.

The total amount of nitrogen within the birds’ droppings can be considerably reduced by formulating diets based on the birds’ amino acid requirement instead of on total crude protein. As the percentage of crude protein in the diet is lowered and replaced with conventional sources of protein (such as soybean meal, sunflower meal) with synthetic amino acids, nutrient retention is maximized. Reducing dietary protein by 3-5% may cause a reduction of 60% or more in total nitrogen excretion.

An inflamed and unhealthy intestine is not capable of absorbing digested feed even if the digestion has been enhanced by exogenous enzymes. Keeping the gastrointestinal tract healthy and functional during the whole growing period is key to reducing the excretion of undigested and unabsorbed feed in the faeces which will in turn reduce the ammonia volatilization within the poultry house.

Another method to help prevent ammonia emissions from nitrogen within the faeces is to use components such as the extract of Yucca schigidera, which has been shown to reduce blood urea and blood ammonium ions, reduce excessive nitrogen breakdown in the ceca and bind ammonia so it stays in the manure instead of being released as gas. When it is used in the feed from the time the birds are placed to the time the birds leave the barn it can control the release of ammonia into the air.

Acidifying agents can be used to lower the pH of the litter (below its usual 7.5–8.5), which will help slow down and decrease the activity of the microbes that break down the nutrients in the manure to release ammonia.

Having sufficient dry litter in the poultry house (ideally an 8-10 inch layer) will allow the birds to turnover the litter when dustbathing and preening which will encourage a more natural composting process for the manure.

Another strategy could be to use odour and moisture absorbents in the litter or manure. These absorbents, which are usually clay-based, act to either slow down the microbial activity or lower the moisture content of the litter. By increasing the pH level of litter lime accelerates the release of ammonia making the situation worse. Better options for neutralizing ammonia, as well as absorbing litter moisture and reducing the activity of ammonia-producing bacteria, are diatomaceous earth (DE), absorbent clay, and zeolite.

Although there are multiple products on the market that will reduce ammonia in poultry houses, they should not be viewed as a silver bullet to treat all ammonia problems.

Ration composition, diet management and improved nutrient digestibility are invaluable for ammonia management and control. There is no substitute for good husbandry practices. Maintaining litter, having good ventilation and avoiding excess moisture will have a greater effect than solely using a product.

Ammonia must be constantly monitored and managed – there isn’t a one size fits all solution.