Contribution of the Agri-Food Sector to the National Economy

The agri-food sector is one of Ireland's most important indigenous manufacturing sectors, accounting for employment of around 167,500 people. It includes almost 700 food and drinks firms throughout the country that export food and seafood to more than 160 countries worldwide. Economic activity in the agriculture and food sector produces a far bigger return than equivalent activity in other traded sectors of the economy. That is because agri-food companies source 74% of raw materials and services from Irish suppliers, compared to 43% for all manufacturing companies.

Data from the Central Statistics Office (CSO) indicates that the agri-food sector (including agriculture, food, drinks and tobacco as well as wood processing) accounts for around 7% of Economy wide GVA with primary agriculture, forestry and fishing accounting for around 1.6% of Ireland’s GVA.

Employment in the Agri-Food Sector

Composition of Employment in the Agri-Food sector, 2017 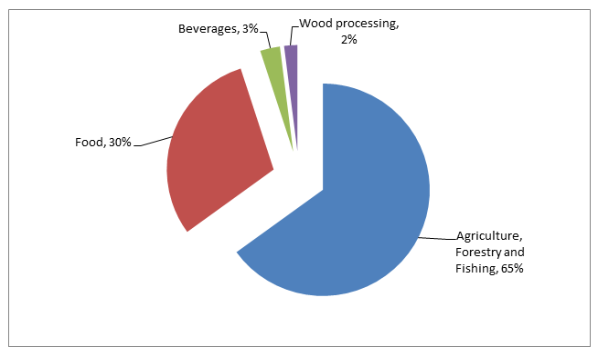 Agri-food exports account for over 11% of total Irish merchandise exports. However, when the low import content of agriculture and food exports and the low repatriation of profits earned in the agri-food sector are taken into account, it is estimated that the agri-food sector accounted in 2008 for around 40% of net foreign earnings from merchandise exports.

Land Use and Farm Structure

Output, Input and Income in Agriculture, 2017

The CSO currently estimates that the operating surplus in agriculture in 2017 increased by over €800m on the level recorded in 2016, a dramatic 31% increase. This very large increase was largely due to a very large increase in the value of agricultural output and relatively stable levels of expenditure on inputs.

Comparing 2017 with 2016 we see that the value of goods output increased largely as a result of large increases in the value of milk output , while subsidy receipts and expenditure on inputs (intermediate consumption remained largely stable).

Ireland in 2016 net exports of beef accounted for 85% of production, making Ireland the largest beef net exporter in the EU and fifth largest in the world.

The agri-food sector makes a very significant contribution the Irish economy. The Annual Business Survey of Economic Impact (ABSEI) for 2016, conducted by Department of Business, Enterprise and Innovation, provides aggregated estimates for all Irish-owned and foreign-owned firms across a range of variables. As part of this survey, Forfás collates data on Irish Economic Expenditure (IEE), taken to consist of wages, Irish raw materials and Irish services. An analysis of expenditures by companies operating in Ireland highlights the close ties the FD sector in Ireland retains with the national economy in terms of IEE as compared to manufacturing in general.

Irish Economic Expenditure accounts for 70% of total expenditure in the FD sector. This compares favourably to the manufacturing sector when taken as a whole, where the equivalent rate of IEE is 38%.

In 2017 861 farms participated in the Teagasc National Farm Survey (NFS), these farms are weighted to represent a national population of approximately 84,599 farms. Overall 2017 was a a good year for farming with average farm income up 32%on 2016. Average family farm income in 2017 is estimated at €31,412.

Overview of the dairy farm system

There were approximately 15,639 Dairy farms with an average income of €86,059 in 2017. FFI in 2017 was 65 percent higher than in 2016 due to higher milk prices and increased deliveries. Milk prices increased significantly in 2017, with average prices recorded by the Teagasc NFS in 2017 32% higher than in 2016. The positive impact of higher prices on the value of Irish dairy farm output was augmented by ongoing expansion of production in 2017. In 2017  milk production per hectare on the average Irish dairy farm increased by 2% 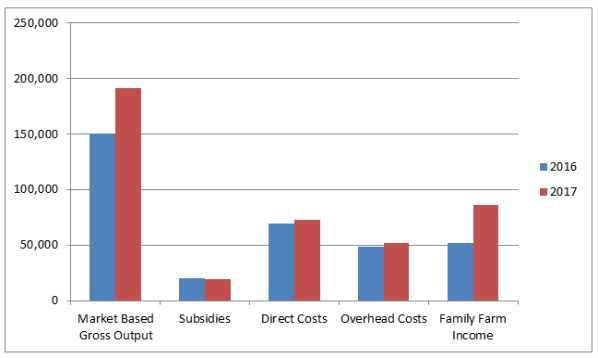 Overview of the cattle rearing system

There were approximately 19,952 cattle rearing farms represented in the NFS in 2017, suckler cow production is the dominant system on these farms.

The value of output on these farms grew in 2016 due largely to improved cattle pricesin 2017. The value of direct payments on Cattle Rearing farms was mareginally lower (-1%) on the level 2016 level .

Total costs of production in2 017 were 6% higher than in 2016 with both direct costs (+7%) overhead costs (+6%) up strongly. The family farm income earned on the average cattle rearing farm was largely unchanged relative to 2016 with growth in output value offset by higher costs of production. 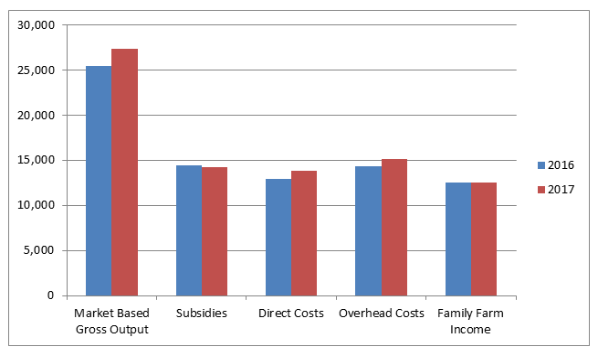 Overview of the cattle other system

The value of output increased on these farms increased due to marginally higher finished cattle prices and increased production volumes.  The value of direct payments was up 1% on 2016. Input expenditure was 3% higher in 2017, with direct costs up significantly on 2016 (+5%)  while overhead costs increased by only 1%. 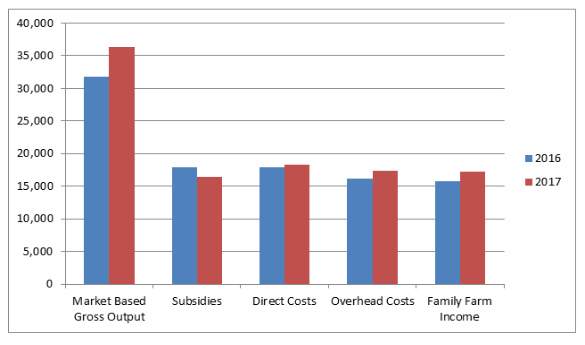 Overview of the sheep farm system 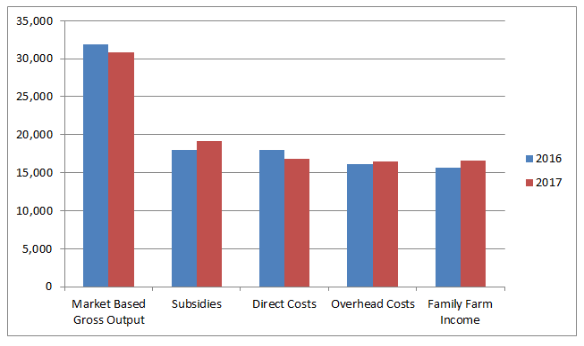 Overview of the tillage system

Gross output value on Tillage farms was lower in 2017 despite higher prices and yields. The decline in cereals area on irish tillage farms was reflected in lower output value. The reduction in area planted and harvested was also reflected in lower levels of levels input expenditure.. Both overhead costs and direct costs of production declined significantly on Tillage farms. Total costs declined by 14% on 2016 levels. With the decline in costs of production on the average Irish tillage farm exceeding the decline in the value of output, average family farm income in 2017 increased by 20%. 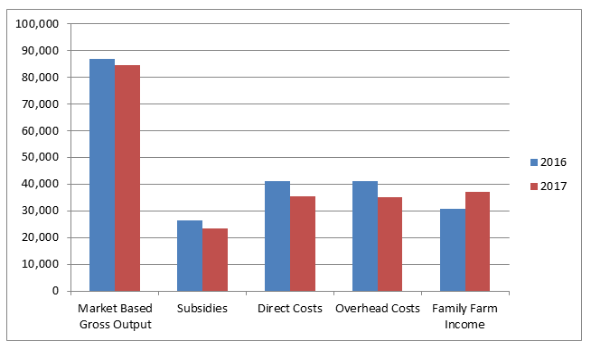