Since the autumn we have been running a number of research projects using satellites to provide information on a national and local level on the production and management of grasslands in Ireland. This research has coincided with an awful autumn in 2012 and very late spring in 2013, creating a fodder shortage on Irish farms. Whilst these projects are in early stages – within a year or two we should be able to produce location specific estimates of grass cover and offer up-to-date paddock management advice - we have produced an interim product to track the extent of the fodder crisis and act as an early warning for the autumn. The product is called a Vegetation anomaly Map based on 10 Years of MODIS NDVI images. In short it compares the amount of vegetation visible in an area (in this image the county is divided into 1km Square pixels) over a 16 day period with the normal amounts in the last decade for that period. It takes into account “normal” variation so only large differences show up as variation.

In the images below the range is brown for extremely low, compared to the average for the decade, through orange which is very low, to blue which is normal to green for above average. The first Image is comparing the period around April 25th with the average performance for that period and the Second is for around the period of May 15th (click on the image to see a larger version): 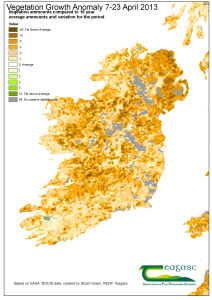 We can see immediately that up to end of April the situation was dire with grass level far below normal. By the end of may things have improved but note that grass levels in most of the BMW region are still below normal (and remember this is above and beyond what you’d expect in a “normal” bad year). Also just because grass amounts are back toward the normal level for this time of year in the south, doesn’t mean the end of the problem most farmers in this region should normally have cut one crop of silage by now and it hasn’t happened this year (so grass amounts are “above average” because they’ve not yet been cut; shows how far behind in the agricultural calendar we still are).

The fodder crisis is a cumulative event, that is ongoing, a late summer drought as in 2006 or a wet autumn as last year could force many farms to the brink again. It is hoped that maps like these will enable us to characterise the threat early on. I’ll be talking about these maps and other uses of satellite technology to aid food security on Friday June 7th in the Space Expo in TCD if you’d like to pop along.