Potato late blight, caused by the oomycete pathogen Phytophthora infestans, continues to be the most economically destructive disease of global potato crops. The primary potato disease remains Phytophthora infestans (late blight), it is responsible for €1,000,000,000 of annual losses in the EU alone.  In Ireland alone it is estimated that €5 million is spent annually on fungicides to mitigate the impacts of the disease, which represents between 15-20 fungicide applications per season. Given Irish climatic conditions during the summer months where such preventative measures are not applied losses of up to 100% can be experienced. 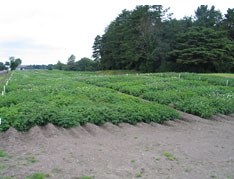 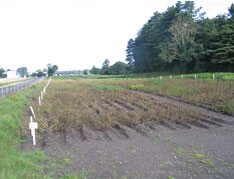 Currently the Irish P. infestans population is dominated by three distinct genotypes. By understanding how these genotypes interact with their environment, it is possible to develop novel disease control measures to minimise blight’s impact upon potato crops. Unfortunately populations of P. infestans never remain static and the potential for either migration of new genotypes into Ireland or the development of sexual progeny within Ireland poses real threats to the future success of current control strategies. To ensure such changes are detected the population is monitored on an annual basis. This entails the molecular and phenotypic characterisation of Irish P. infestans strains collected from all possible sources: farmers, allotments, home gardens etc… 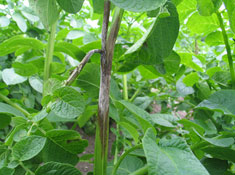 Monitoring the evolution of blight strains

Blight is a master at adapting to its environment, it has an ability to complete its life cycle in less than five days. This is a major advantage to a pathogen that is subject to a barrage of different stresses (e.g. heavy fungicide use). This is most evident in relation to its ability to overcome resistant varieties and/or fungicides. Using the Irish P. infestans collections (both DNA and culture) available at Oak Park changes in specific genotypes can be monitored over a period of 20 years. This also allows the retrospective detection of such changes which can provide a greater understanding of the genetic mechanisms blight employs to do what it does best, destroy plants.

Using the information gained through the above themes disease control strategies are developed and tested under field conditions. In collaboration with the Breeding Programme season Teagasc undertake an extensive field programme for late blight control. Using natural infections the ability of both fungicide programmes and/or varietal resistances to restrict blight development are assessed.