Dutch elm disease is a forest disease caused by a fungus (Ophiostoma spp.) that affects elms in Europe and North America. Even though a fungus causes the disease, it spreads thanks to the action of bark beetles, which carry fungal spores allowing the fungus to infect new trees.

Initially, the disease only caused minor symptoms to elm trees. However, a highly lethal and virulent strain of the fungus was introduced into Europe in 1967. By 1990, most elm trees in Europe were dead. Stump saplings resprout from dead elm stems and grow up to approximately 5 metres before they succumb to the disease again. 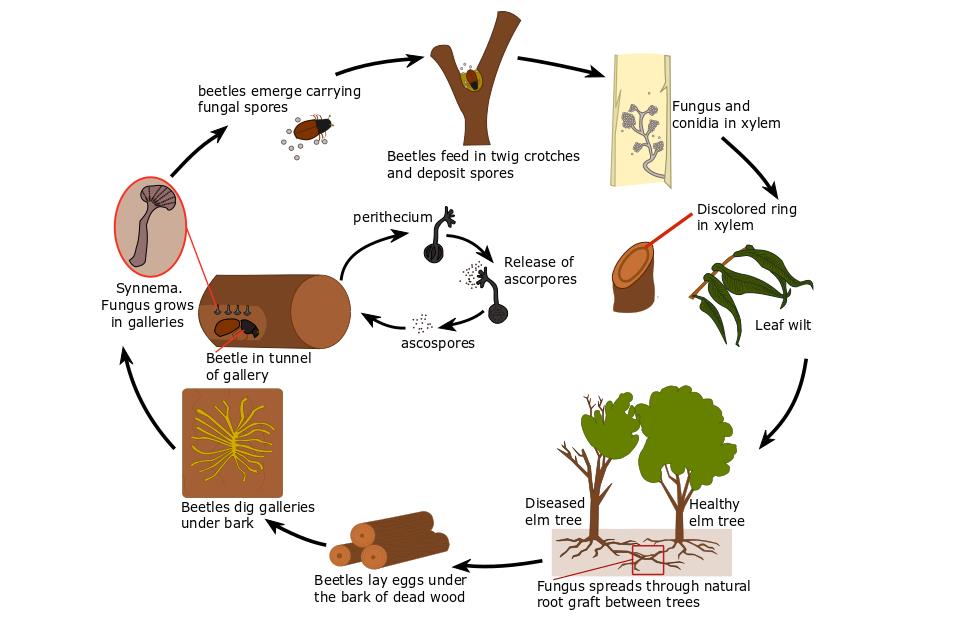 Diagram of the dynamics of the Dutch elm disease.

Wych elm (Ulmus glabra) is the only native elm species in Ireland and is susceptible to Dutch elm disease. Once a very abundant tree in the Irish landscape, it is uncommon to find living elm trees nowadays. Even though there is natural resistance to the disease within elm populations, it is extremely rare. Most living elms are thought to have been able to “avoid” the disease rather than being resistant to it.

Do you know of a healthy elm tree?

If you know of any healthy elm tree, Teagasc is interested in collecting samples of it to verify its resistance. The objective of this work is to establish a collection of Irish elm genotypes resistant to the Dutch elm disease.