A felling licence granted by the Minister for Agriculture, Food and the Marine provides authority under the Forestry Act 2014 to fell or otherwise remove a tree or trees and to thin a forest for management reasons. 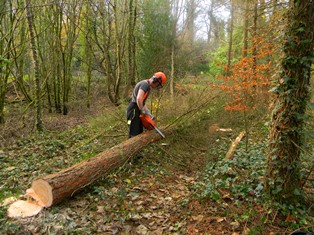 The Forestry Act 2014 provides for a single licence process for tree felling:

Felling licences can be valid for up to 10 years in duration, which may be extended for one or more further periods, up to a total of 5 years.

However, trees outside of the forest can be felled without a tree felling licence in certain circumstances:

What is a forest?

Forest land is defined as land under trees with a minimum area of 0.1 hectare and tree crown cover of more than 20% of the total area (or the potential to achieve this cover at maturity).

A tree means a free-standing, woody perennial plant whose species has the potential to have a more or less definite crown and be capable of reaching a minimum height of five metres at maturity and includes a sapling and the species of birch and hazel.

The Forestry Act 2014 applies to all such areas.

Trees outside a forest are those trees which do not meet the above forest definition. In the case of such trees, certain exemptions exist to the requirement to submit a tree felling licence application (see below).

It is very important that an applicant reads the guidance notes (available for download below) very carefully before filling out the application form (available for download below). For instance, if an applicant requires a 10-year licence, details of all proposed felling operations for the 10-year period must be supplied in the felling information table (Part 3). Otherwise a licence will only be issued to cover the fell operations and years specified in the felling information table.

When the Department of Agriculture, Food and the Marine (DAFM) receives an application, it carries out 'screening' to assess if there is a possibility of the proposed forestry project having an effect, either individually or in combination with other plans or projects on a Natura site within a 15-km radius.

Natura sites include Special Areas of Conservation (SACs) and Special Protection Areas (SPAs). They are designated to afford protection to the most vulnerable habitats and species in Ireland.

DAFM can only approve a forestry-related application where it deems at screening stage that there is no possibility of an effect on any Natura site, or (at appropriate assessment stage, if required) that there will be no adverse effect on the integrity of any Natura site.

You can find further details on the appropriate assessment procedures here.

The Site Notice must be erected at least seven days prior to the commencement of harvesting operations and must be maintained in position for the entire duration of the works.

The notice must be renewed or replaced if it is removed or becomes defaced or illegible within that period.

Lists of Appropriate Assessment cases open for consultation are published on the forestry pages of the Department’s website.

How to apply for a felling licence

Frank Barrett (Department of Agriculture, Food and the Marine) explains how to apply for a felling licence, how to complete the harvesting and reforestation plan and gives an overview of the public consultation and appeals process. Filmed in June 2019 at a Teagasc Talking Timber event, Co Cork.

Here are some common scenarios where trees can be felled without the need to submit a tree felling licence application under Section 19 of the Forestry Act, 2014:

This exemption does not apply in the case of a tree:

This video outlines the main points of the Forestry Act 2014, explains how to make a felling licence application and gives an overview of the DAFM’s felling decision tool.