Since 2015, Teagasc has developed two research projects on ash dieback of common ash (Fraxinus excelsior). This invasive tree disease was detected in Ireland in 2012 for the first time, likely after being introduced with imported ash planting stock from continental Europe. The disease will affect all ash trees in Ireland, causing the majority of them to die over the next two decades.

A very small proportion of ash trees show natural tolerance to the pathogen. This means that they show minor symptoms and the disease does not have noticeable impact on their growth or health.

Teagasc works to identify such trees and build up a gene bank with the ultimate goal of producing tolerant ash seed and restore ash trees to Irish forests and hedgerows. 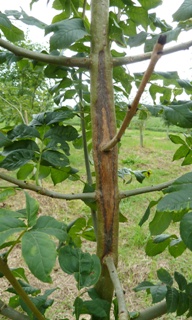 The project aims to build a gene bank of ash composed by individual genotypes of ash with tolerance to ash dieback. These genotypes will be used to bulk up stocks of tolerant trees, as well as for establishing seed-producing orchards.

We aim to identify tolerant individual trees by naturally screening Irish genotypes of ash in continental Europe where the disease is at a more advanced stage and disease pressure is higher. We are exposing 1000 Irish genotypes of ash to high disease pressure in infected areas in Lithuania to identify those trees that show no symptoms over a period of three years. These trees will be regarded as tolerant trees and included in the Irish ash gene bank.

See image below: Walsh Scholar Will Plumb samples ash seedlings in a woodland.

We aim to propagate vegetatively tolerant genotypes of ash in order to produce clones that can be planted in forests while tolerant seed is being produced and tested. Teagasc research aims to develop methods to scale up the propagation on a scale adaptable for commercial production.

Asiatic species of ash are numerous and several show resistance to ash dieback, having co-evolved with the pathogen in Asia. Controlled crossing of common ash with exotic ash species may be necessary as a means of introducing resistant genes. In this context, hundreds of artificial pollinations were done at Teagasc, 157 putative hybrids were produced, of which 14 were confirmed using genetic barcodes developed within the project. These hybrids will now be tested for their susceptibility to ash dieback and be included in a conservation collection.

The project collaborates with Coillte and OPW to establish multiple gene banks of tolerant ash across Ireland.