Broadleaved species may deteriorate in quality when planted out in open fields due to late spring frosts, exposure to cold, desiccating winds and insects and diseases. Studies on the growth of broadleaf tree species at the Teagasc Research Centre in Kinsealy found that the rate of this deterioration in quality was so great that remedial action was necessary. 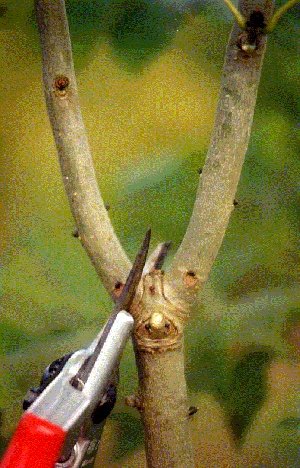 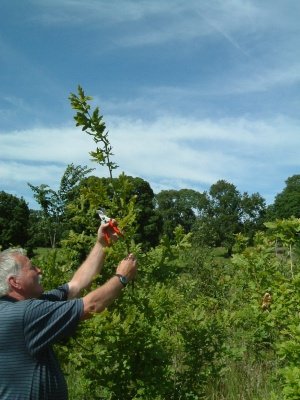 With limited information available on pruning and shaping young broadleaf trees a trial was initiated at Kinsealy to assist in the development of a programme to promote leader growth and improve stem form. A number of species were assessed, including ash, beech, cherry, pedunculate oak, sessile oak, sweet chestnut, sycamore and walnut, to establish if formative shaping could halt or control the decline of tree stem quality by ensuring the presence of an apically dominant leading shoot.

A quality ranking system was devised to assess tree form and, in particular, stem quality. The 5 point ranking scale ranged from category 1, very good quality, to category 5, very poor quality.
Formative shaping involved removing forks, dead leaders, co-dominant shoots and disproportionately large side branches. In the case of forks, the weaker, least straight or poorer quality shoots were removed. Small side branches were not removed. Shaping began when the trees were in their second year after planting, measuring between 0.8 and 1.0 metres in height and continued, as necessary, on an annual basis. The aim was to produce a straight stem of at least 3 metres using simple tools and the least time and physical effort.

Shaping was carried out in June/July in one half of each row in the plantation. The other half row remained unshaped as a control. Branches were removed using good quality (bypass) secateurs and loppers. Care was taken not to damage the branch collar or the branch bark ridge. These are ridges that develop where the branch meets the main stem of the tree. Shaping cuts were made just outside the branch collar. Each year tree height and stem diameter (at 20 cm above ground level) were measured and quality category was assessed for each tree.

Based on End of Project Report: