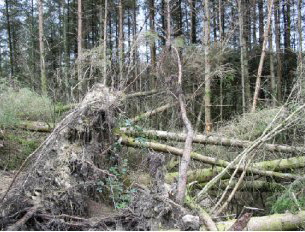 The annual loss to the forest industry due to windthrow is estimated at approximately €1.3 million. Windthrow is caused by the failure of poorly drained soil beneath the root plate to anchor trees. This results in the stem and rootplate of a tree overturning.
In addition to the economic losses, windthrow can also result in increased soil erosion, run-off and adverse visual impact. Factors affecting the occurrence of windthrow include tree type, soil type, soil drainage, soil strength, elevation, aspect and location.

Shear testing of soils
The deformation of a layer of soil when the top boundary is displaced relative to the bottom layer under plain strain conditions is defined as simple shear. Such conditions occur beneath the stem of a tree subject to wind loading. The study showed that repeated loading results in the generation of substantial excess pore water pressures. This causes a reduction in the strength of the soil.

Computer aided modelling
Mole drainage systems at spacings of 1.025 m and 2 m were modelled based on a field experiment at Ballinamore, Co Leitrim. Three successively higher design rainfalls were applied and the depth to the water table was measured at a point mid-way between mole drains. The results are summarised in table 1 and show that the closer spacing of mole drains (1.025 m spacing) maintained the water table at a greater depth.

Five days of rain as recorded in the field experiment were applied to the two models. The closer spacing of drains (1.025 m spacing) compared favourably to the wider 2 m spacing. This indicates that for forestry applications a 1 m spacing of mole drains is preferable to 2 m spacing on the site types tested.

Based on End of Project Report