However, in recent years the focus shifted towards gaseous emissions, in particular ammonia, where manure management (housing, storage, landspreading) is responsible for nearly 80% of all emissions (EPA, 2020). Slurry amendments can be broadly divided into three categories: (I) chemical acidifiers reducing slurry pH, (II) physical / chemical adsorbents and (III) biological / microbial inoculants. Internationally, chemical acidifiers have been most extensively studied to date.

Our own work has already covered storage and landspreading experiments, where a selection of chemical acidifiers, alternative acidifiers (in the form of farm wastes and food production by products) and commercial products have been assessed (Table 1). In general, chemical acidifiers remain the most reliable options to reduce ammonia emissions, however possible negative impacts on nitrous oxide need further investigation. Alternative acidifiers proved inconsistent in their efficacy to reduce emissions, with the exception of silage effluent. Most waste products acting as alternative acidifiers introduced an additional source of labile carbon into the slurry, which often led to increased emissions of methane and carbon dioxide. Regarding products commercially available on the market, four have been used in incubation trials with little success. Three out of four commercial amendments, denoted Commercial A through to C, use bacterial inoculants as their active ingredients while the fourth product uses low dosage of chemical acidifying salts (Table 2).

Currently, a large RSF project Abating Ammonia in Agriculture (Triple A) is focusing on quantifying ammonia emissions and abatement potential of various additives during slurry storage and landspreading, also in combination with low emission slurry spreading techniques. The project will investigate the impact of slurry amendments not only on ammonia, but also GHGs, agronomy and soil health. Concurrently, an SEAI funded project is studying efficacy of additional slurry amendments containing halide salts.

Table 1. Range of slurry amendments and their associated impact on gaseous emissions of ammonia, methane and nitrous oxide during storage and at land application, as quantified by the recent research carried out at Johnstown Castle. 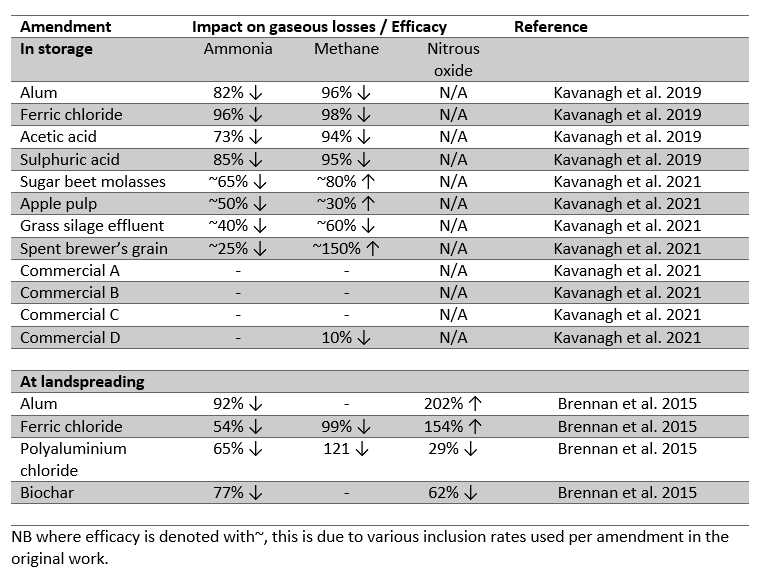 Nitrogen fertiliser application represents the largest anthropogenic source of nitrous oxide (N2O) emissions, and the magnitude of these emissions is dependent on the type of fertilisers applied in the agroecosystems.

The purpose of this study was to evaluate the effect of fertilisers with contrasting NO3-to NH4+ ratios on N2O emission in temperate agricultural grassland.

Methane is a greenhouse gas that is predominately produced by ruminants such as cattle and sheep. As this gas contributes 59.3% to total agricultural greenhouse gases in Ireland, according to the 2021 Irish national greenhouse gas inventory report, it is important that it is measured in a pasture based system in order to ensure that appropriate methane measurements are included in the national inventory as well as identifying appropriate methane reduction solutions. Currently at Teagasc Moorepark there are 4 GreenFeed machines that are being used to measure methane emissions on over 150 dairy cattle while animals graze.

The GreenFeed system is essentially a feed bin on a trailer that also has the capability to measure methane, hydrogen and CO2. Small amounts of concentrate (30grams) is dispensed to the cow every 25 seconds while her head is inside the feed bin. Ideally a cow needs to have her head in the feed bin for at least 2 minutes, therefore the concentrate drops are spread out over a 2 minute period to entice the cow to stay at the machine. Each cow is electronically identified and her breath is sampled continuously while at the machine. A sub sample of the air exhaled by the cow is passed through various sensors while the cow is eating. . This information is then fed to a central database in the US via the mobile network where various algorithms are used to generate useful information from the data.

Results from a recent Teagasc study indicate that average GHG emission intensity per kg of milk produced decreased by 13 % between 2000 and 2017. This means that dairy farmers are now producing each kg of milk with considerably fewer emissions than 20 years ago.

A new scientific paper from Teagasc has shown that getting soil pH right through a liming programme can significantly reduce emissions of nitrous oxide (N2O), a potent greenhouse gas. The paper from researchers at the Teagasc Environment, Soils and Land-Use Department in Johnstown Castle, County Wexford has just been published in the scientific journal, Agriculture, Ecosystems and Environment (AGEE).

Head of the Teagasc Environment Research Department, Dr Karl Richards said: “The paper shows that there are reduced N2O emissions from fertiliser applied to higher pH soils, where the pH is in the recommended agronomic range. Farmers that can improve soil pH for agronomic benefits, can also reduce N2O emissions. This represents a win-win for the farmer and the environment.”

Soil pH is generally considered a master variable, controlling a wide range of physical, chemical and biological properties, including a significant effect on microbial processes responsible for production and consumption of N2O. Senior Research officer at Johnstown Castle, Dr David Wall stated that “using an existing long-term intensive grassland liming and P trial, this research investigated the effect of longer-term lime and P management and their interaction on N2O emissions and grassland productivity.

Postdoc Researcher with Teagasc, Ognjen (Oggy) Zurovec outlined the main findings: “We found that a long-term increase in soil pH as a result of liming significantly decreased N2O emissions over 12-month measurement period. In addition, keeping the soil pH and P at the optimum level has the potential to further reduce N2O emissions due to higher grass N uptake through increased yields. This means that the application of good farming practices has considerable N2O mitigation potential in temperate grasslands.”

The results showed that applying 5 tonnes of lime per hectare every 3-4 years increased soil pH from 5.1 to 6.9 and reduced N2O emissions by 39%. The study estimated that the increase in soil pH of grasslands in Ireland over the last 12 years potentially reduced national N2O emissions by 95,000 T CO2-eq yr−1, with potential for a further reduction by up to 254,000 T CO2-eq yr−1 if all the remaining acidic soils are brought up to optimal pH.

A recently published study with dairy cows from Teagasc and UCD demonstrated that high EBI (€181) cows had 10% lower GHG emissions per kilogram of fat- and protein-corrected milk across a range of feeding system, compared to cows with a national average for EBI of €82.  This paper highlights that using high EBI genetics will considerably reduce GHG emissions intensity across a range of pasture-based feeding scenarios, while contributing toward a small but favorable effect on N efficiency. The full paper is available in the Journal of Dairy Science