The highly invasive Blackgrass weed was found in a commercial wildflower mixture that was grown in an experimental plot in Carlow. If this weed is widespread in mixtures which were planted on farms, schools, gardens, and amenity areas across the country it poses a huge risk of contamination to crops

In recent years, Teagasc has had a policy of increasing habitats and improving biodiversity on all of its research and college farms.  In Oak Park, which is predominantly in tillage, this has included establishing new hedges and field margins on cultivated fields. A range of field margins, from native grasses to mixtures of grasses and wild flowers, have been established. Researchers have been monitoring these field margins for beneficial insects and their impact on insect pests in adjoining crops. Additionally margins of native grass mixes of cocksfoot and timothy have been particularly effective in stopping sterile brome, which is a grass weed in cereals, from spreading from the hedgerow into the crop.

Blackgrass has a narrow dark purple to black seed head

One such field margin planted last autumn was a diverse mix of wild flowers and grasses. On inspection by the Teagasc farm manager in Oak Park, John Hogan in recent days, it has been noted that this mix was contaminated with blackgrass which is a particularly pernicious weed of cereal crops, if left uncontrolled it can produce up to 6,000 seeds per plant.  These seeds will spread quickly by machinery or on plant material. 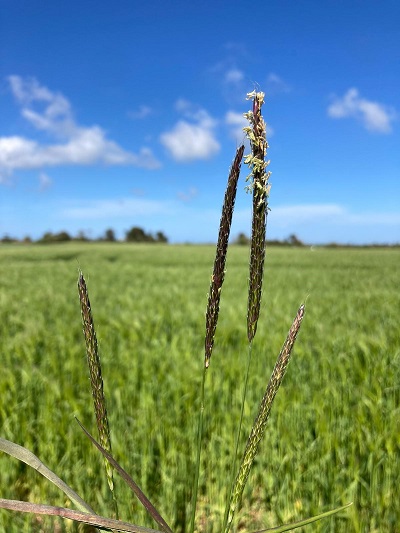 John Spink, Head of Crops, Environment and Land Use Programme in Teagasc said: “Blackgrass is widespread in the UK where it is also resistant to a wide range of herbicides and very costly to control, in some instances requiring the destruction of crops.” John added;  “If the wildflower seed has been imported from the UK then resistant blackgrass may have been imported with it. The blackgrass is just beginning to flower and because of the risk of spread of seed into neighbouring crops, unfortunately, this field margin has had to be destroyed”.

Such wildflower mixes are frequently used in domestic and amenity situations. Michael Hennessy, Head of Crops Knowledge Transfer in Teagasc said: “We strongly encourage anyone with such seed mixtures sown to inspect the area and if they notice blackgrass, which has a narrow dark purple to black seed head, to remove it immediately before seed is formed and can spread into any neighbouring crop areas.”

Michael Hennessy, Head of Crops shows Blackgrass in the problem Wildflower crop in this video