A Historical View of Woodlands in Ireland


Twenty thousand years ago, Ireland was almost completely covered by a thick ice sheet, stretching south west from Scotland. Woodland history effectively began about 10,000 BC. Kevin O’Connell, Teagasc Forestry Development Officer gives an account of our woodlands from the first trees to the present

When Ireland was almost covered by the thick ice sheet, only parts of Kerry, west Cork and Connemara were spared.  Vast quantities of water were locked up in these ice sheets.  Sea levels were approximately 200 metres below today’s levels.  The lowering of the sea levels resulted in land bridges forming between Ireland, Britain and also Britain and the continent of Europe (Goodwillie, 1987). About 15,000 years ago, temperatures increased, resulting in sea levels rising to within 90 metres of today’s levels, due to melting waters from the ice cap. Ireland, 13,000 years ago, was covered in tundra-like landscape (Mitchell & Ryan, 1997). 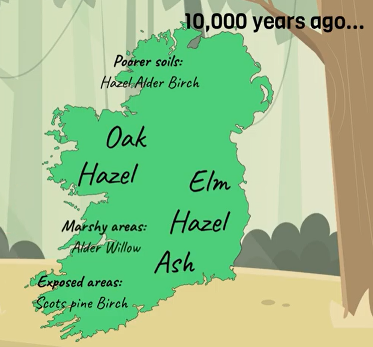 Pioneering tree species like birch, hazel, willow and juniper arrived first.  About 11,000 years ago, Ireland was subject to a mini ice age which lasted for about 1,000 years (Nelson & Walsh, 1993). During this period, the grassland disappeared and one of our famous land animals, the Irish elk, became extinct. Woodland history effectively began about 10,000 BC when the return of a hospitable climate enabled trees to recolonise this island and re-establish the pre-historic forests (Rackham, 1980). Larger seed trees such as oak, ash, elm and pine eventually arrived in Ireland, possibly aided by mammals and birds as they crossed the land bridges (Goodwillie, 1987).

Approximately 5,000 BC, Ireland was cut off from Britain. The National Survey of Native Woodland in Ireland lists 33 species of tree native to Ireland (Higgins et al., 2004). Some tree species such as beech and sycamore, which are now considered to be naturalised, were much later introduced by man. Pollen studies have shown that each region had its own particular variation in tree cover. Elm and hazel were dominant in central Ireland at this time. Pine and birch woods were to be found in mountainous and western areas. Oak and hazel were dominant in western Ireland. Alder was not widespread and only found around lakes. Ash was restricted to certain sites and not as widespread as today (Hall, 1995). Rackham (1980) refers to this period as the Atlantic period, where average temperatures increased and the climate became wetter. Peat began to form in central lowland areas. Elm was the most common tree in Ireland at this time. Oak was not as widespread as imagined. Mesolithic man had very little impact on the forest cover as they were mainly hunter-gatherers and confined themselves to seashores and river estuaries. 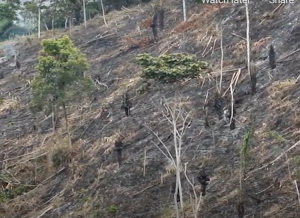 The first forest clearance for agricultural purposes began with the arrival of Neolithic farmers 3,500-2,000 BC. They practiced a system called lardram – a slash and burn system (Rackham, 1980). Trees were killed by ring barking and areas were subsequently cleared by burning.  Primitive cultivation was carried out using stone mattocks. The fertile forest soils were used initially to grow primitive wheat and later pollen analyses verified the presence of oats, barley, flax and other attendant weeds (Hall, 1995).

These temporary clearances were cultivated until soil fertility was exhausted and clearance and cultivation activity simply moved on to another patch of land. The forest was then left to recolonise the bare ground. In some areas of intensive agriculture, heath land developed such as the great Heath of Maryborough (Feehan, 2005).

During the late Neolithic and early Bronze Age, circa 2,000 BC, the quantity of ash and oak increased.  Both these species are light demanders and may have found it easier to recolonise these bare area better than other tree species. Pollen counts indicate that elm went into decline and, in a period of about 500 years, over half the population of elm vanished from Northwest Europe (Nelson & Walsh 1993). Rackham, (1980) accounts a number of theories which have been put forward for this:

The Bronze Age introduced the first mines to Ireland, copper deposits were mined in Cork and Kerry and charcoal was needed to smelt it, leading to further depletion of wooded areas. After 500 BC, the climate again became wetter and colder and this accelerated peat development which destroyed birch and pine forests. The remnants of these forests can be found in our bogs today (Bellamy, 1986).

Woodland clearance continued during the Iron Age as more land was needed for farming and charcoal for smelting. The use of a primitive iron plough meant that more ground could be cultivated (Nelson & Walsh 1993).  Grazing was practiced in the uplands and tillage in the lowlands (Nicholls, 2003).

The arrival of Christianity to Ireland in the early fifth century influenced agricultural methods here.  The use of an iron shod plough with coulter and mouldboard dates from this period (O’Corraín, 1972) and the subsequent division of land into townlands for grazing and cultivation during the eight century would have contributed towards the systematic removal of the forest cover (Nicholls, 2003).

The Viking’s arrival in the ninth century had very little effect on the landscape. They did, however, construct our first towns in coastal areas, all of which were made from wood. The arrival of the Normans in the early twelfth century led to large scale clearance of forests. They introduced the concept of intensive land use to produce a cash surplus in contrast to the subsistence type of farming practiced before their arrival. It is significant, from the distribution of Norman sites, that they were interested in fertile, well-drained soils from which they expected to get a large profit from their investment (Neeson, 1991). The Normans added the rabbit and fallow deer to the herbivorous enemies of the forest (O’Carroll, 2004).

A policy of conquest and settlement was pursued by the Tudors from the middle of the sixteenth century. It was from this period and particularly from 1600-1700 AD that the real exploitation of Irish forests took place (Nicholls, 2001). It is known that the Pale was largely devoid of woodlands, while the mountains of Wicklow and Muster and the valleys of the rivers Blackwater and Lee were at least partly wooded (Higgins et al., 2004). McCracken (1971) estimates that at least one eighth of the country was wooded in 1600 AD, however Hall (1995) found nothing in the pollen evidence of the lower Bann valley to suggest wide spread oak woods either in the sixteenth or seventeenth century. Rackham (1995) calculated from the Civil Survey in Ireland 1654-6, that 2.1 % of the country was wooded.

Extensive land grants by the English crown to settlers and adventurers led to the exploitation of the remaining woodland in earnest. Oak timber was exported to Britain for ship and house building. Ireland was one of the biggest exporters of barrel staves at this time (O’Carroll, 2004).  Valuable oak, in inaccessible places, was made into staves and extracted using horses. Around 1610, furnaces were built to smelt local and imported iron ore using locally produced charcoal.  These iron works were set up wherever there was a supply of wood and they did not leave a district until it was completely denuded of trees (Neeson, 1991).

After the Cromwellian wars many of the English soldiers were rewarded with tracts of land in Ireland instead of financial payments. Not wishing to remain in Ireland, many felled the trees and sold them before selling the land and returning to England (Nicholls, 2001). The signing of the Treaty of Limerick led to the end of a very turbulent century and resulted in the ascendancy of the English landlord (Neeson, 1991). It is estimated that by 1700, the woodland area of the country had been reduced to less than 2% (Nelson & Walsh, 1993).

The 18th century introduced a period of political security for landlords. They built large houses and beautified their estates by tree planting. They introduced new tree species from Europe and Pacific coast of North America. American species like Douglas fir, Sitka spruce, Lodgepole pine, Western Red cedar and others were introduced and are still prevalent in our forests today (Tomlinson, 1987).

The Royal Dublin Society (RDS) pioneered the promotion of tree planting over two centuries ago. As part of the philanthropic desire to modernise Irish agriculture, forestry was encouraged, with the first ever premium for planting trees introduced in 1739. Support for tree planting continued for seven decades with records showing that between 1788 and 1806, over 55 million trees were planted across Ireland on foot of the Societies initiatives.

The Land Acts at the end of the 19th century and early 20th century resulted in the widescale transfer of land from landlords to previous tenant farmers. This led to more woodland clearance as many former landowners disposed of forestry assets. Consequently, the area of woodland declined from 152,000 ha in 1880 to 120,000 ha in 1906 and eventually to about 52,000 ha (1% of the national land area) in 1920, as a result of the demands of the First World War (Neeson, 1991).

In 1903, a state forestry programme was inaugurated with the purchase of 200 ha at Avondale, Co Wicklow and the establishment of the first forestry centre and school for training foresters. The 1946 Forestry Act and the policy decision of 1948 to plant a million acres was the start of a new resurgence in planting activity. By 1951, forest cover in the Republic of Ireland amounted to 1.8% of the land area and was comprised mainly of exotic conifer species. The 25,000 acre (10,000 ha) annual target was achieved in 1960 and maintained until 1964 with the exception of a slight shortfall in 1963 (O’Carroll, 2004).

By 1983, 328,000 hectares or 4.8% of the state was wooded. The mid-1980s saw a significant increase in private forest development, with the introduction of EU-funded grant schemes aimed at encouraging private landowners, mainly farmers, to become involved in forestry. Today, the area of forest is estimated to be 770,020 ha or 11% of the total land area of Ireland (DAFM). Forest cover is estimated to be at its highest level in over 350 years.