The European common ash is one of our most important native broadleaf tree species. In Teagasc, an ash-breeding programme to develop dieback tolerant genotypes started in 2015. Dr. Dheeraj Rathore, Teagasc Forestry Researcher has more information.

The European common ash (Fraxinus excelsior; Irish: Fuinseóg) is one of our most important native broadleaf tree species. It is the commonest of our large hedgerow trees and a traditional woodland species that thrives well on suitable soils, particularly in moist, deep well-drained soils of pH6-7, with high available nitrogen content.

Did you know? Ash trees are in the olive family (Oleaceae) and produce oil that is chemically similar to olive oil.

Ash trees are associated with a variety of ecological, cultural and economic benefits. People have been working with ash timber for generations, making tools and sport handles, including hammers, axes, spades, hockey sticks and oars. Its timber is one of the toughest hardwoods and absorbs shocks without splintering. It is therefore an attractive wood and prized for making Hurleys in Ireland. The immature, green seeds are edible and exhibit herbal medicinal values. In the past, ash timber was used to construct carriages and frames for cars.

Traditionally, the stems of ash are excellent for firewood and charcoal production. Tall and graceful, ash trees can reach a height of 35 m when mature  and can live to a grand old age of 400 years or even longer, if the trees are coppiced. However, the progression of ash dieback disease poses a major threat to the species.

What is Ash Dieback?

Ash dieback is a highly destructive disease of ash trees (Fraxinus species), especially the Irish native common ash (Fraxinus excelsior). The disease is caused by the invasive fungus Hymenoscyphus fraxineus, which originated in Asia, and was first found in Europe in the 1990’s.  In Ireland, the disease was first noticed in 2012, and since then has spread across the country with a devastating impact on our ash trees.

Did you know? Asian species, such as Chinese ash (F. chinensis) and Manchurian ash (F. mandshurica) are naturally tolerant to ash dieback disease.

Symptoms of the disease include leaf death, shoot dieback and crown thinning eventually resulting in the death of most trees. Only a small percentage of the trees will show tolerance or even resistance (1 or 2%) to the disease.

Hymenoscyphus fraxineus, also known as Chalara or chalara dieback, has a complex life cycle (see figure 1). The infection first begins when the spores of the fungus, carried by the wind, land on (A) healthy leaves over the summer months causing necrotic lesions. The infection continues further to cause (B) severe symptoms on ash leaves and the fungal mycelium progressively grows down through the leaf petioles/rachis into the woody parts of the tree, causing (C) diamond-shaped lesions. These lesions can eventually encircle the branch/main stem of the tree, cutting off the nutrient supply from leaves leading to the loss of a part of its crown or in many cases the whole crown.

Infected leaves fall to the ground during the autumn months harbouring the fungus throughout the winter months. By early summer, (D) the rachises show early-stage growth of H. fraxineus pre-fruiting bodies. Fertilization of these, possibly by conidiophore spermatia, promotes (E) the formation of mature fruiting bodies that release microscopic ascospores into the air where they make their way on to healthy leaves to complete the cycle.

Did you know? This fungal pathogen has two-phased life cycle: Asexual stage grows in affected trees, attacking the bark and girdling twigs and branches. Sexual stage occurs on infected rachises, or stalks, of the previous year's fallen leaves resulting in production of white cup-shaped fruiting bodies.

Therefore, the disease has spread much faster from an infected area to healthy trees by wind-borne spores, which can travel several miles from its original source. Ash dieback disease affects trees of all ages while younger trees show higher susceptibility and rapid mortality compared to older trees. The disease is now widespread throughout the country and has been identified in all counties in Ireland. Fortunately, research shows that a proportion of ash trees show natural tolerance to the disease and this tolerance is heritable. 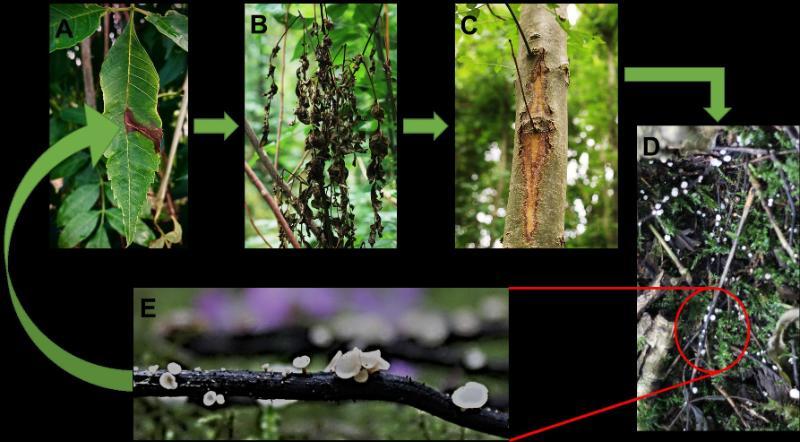 Based on the Irish genotype trial in Lithuania and genotypes collected from other European countries, Teagasc has established two gene banks in Ireland to study their tolerance and suitability to Irish climatic conditions. Based on preliminary data collected over the last two years, around 15% of these trees are showing higher tolerance levels to the dieback disease.

Crossbreeding of common European ash with exotic (Asiatic) ash species may result in tolerant ash genotypes that are resilient to diseases/pests as well as climate change.  Controlled crosses of common ash and Asiatic ash carried out have led to the identification of 14 confirmed hybrids using genetic barcoding from 157 putative hybrid tree population. These hybrids will be added to the outdoor gene bank for further testing including disease tolerance. Identified tolerant ash hybrids may then be backcrossed with common ash in order to transfer the disease tolerant genes into Irish native ash.

The Teagasc research continues to monitor and assess surviving healthy ash trees in Ireland and to include them in the disease-screening programme. Preliminary results from the ongoing breeding programme to improve disease tolerance are promising, but this is an ongoing process, which will take time to come to fruition.

The long-term aim of this work is to multiply these tolerant genotypes to establish clonal seed orchards and continue field-testing the clones and their progeny to restore ash in the Irish landscape.

The Teagasc ash breeding research is conducted in collaboration with national and international partners along with Coillte and the Office of Public Works to establish multiple gene banks and field trials of tolerant ash across Ireland. The Department of Agriculture, Food and the Marine (DAFM) continues to support the research work on Ash breeding and genetic conservation led by Teagasc.