Did you know that grafting is an ancient art form dating back many centuries? Grafting is the art of joining two pieces of living plant tissue together to grow as one plant. Oliver Sheridan, Forestry Researcher describes this interesting process, it's importance and explains the terminology involved

The History of Grafting

An ancient art form dating back many centuries. The Chinese were aware of the art of grafting going back more than 1000 B.C. There were references to grafting in the writings of Aristotle (384-322 B.C.) and also during the days of the Roman Empire. St Paul in his Epistle to the Romans (Romans 11:17-24) refers to the grafting of olives. Grafting was a widely used propagation technique in England from about sixteenth century and while not fully understood, propagators were aware of the importance of matching the cambium layers. Many studies were carried out during the eighteenth and nineteenth centuries on the many aspects of the grafting anatomy. In The Nursery Book, published in 1891, Liberty Hyde Baily (1858-1954), an American horticulturist and botanist described many different methods of grafting and budding commonly used at that time.

The importance of grafting as a propagation method cannot be over stated. The many rare and unusual plants currently offered on the retail market can be attributed to this method of propagation.

There are many reasons for grafting, but the following are some of the more important ones relating to forestry research.

Grafting is the art of joining two pieces of living plant tissue together in a manner that they will unite and subsequently grow and develop as one plant.

Scion is a short piece of shoot containing several dormant buds. When united with the stock will form the upper part of the plant.

Budding is another form of grafting. A single bud is attached to the rootstock.

Stock (rootstock, understock) is the lower part of the plant from below the graft union and consisting of the root system.

Cambium is a thin layer of cells located between the bark (phloem) and the wood (xylem). The cells are meristematic (they are capable of dividing and forming new cells). For a successful graft union to take place the cambium of both stock and scion should be in close proximity to one another.

Callus is the healing tissue (parenchyma cells) that develops at the junction of the graft union arising from the living cells of both stock and scion.

Compatibility For a successful graft union to take place, the stock and scion must be compatible (the ability to form a permanent union).  The use of an incorrect rootstock can bring about incompatibility. The relationship between families or between two genera within a family, or even between two species within a genus is complex. For instance, the Hungarian Oak, Quercus frainetio, must be grafted onto Q. robur (English Oak), as delayed incompatibility will occur if Q. cerris (Turkey Oak) and Q. rubra (Red Oak) rootstocks are used. Some genera that display graft incompatibility problems include Acer (Maples), Juglans (Walnut), Prunus (Cherry), Quercus (Oak) and Pinus (Pines). Knowledge of the correct rootstock and scion wood relationship is essential, particularly for conifers and trees, if crop failure, weak growth and poor quality is to be avoided.

Field grafting The rootstocks are lined out in the field and grafted during late spring (budding carried out in summer).

Materials and equipment required for grafting

Scion wood – In most cases past season’s growth collected during the dormant season. 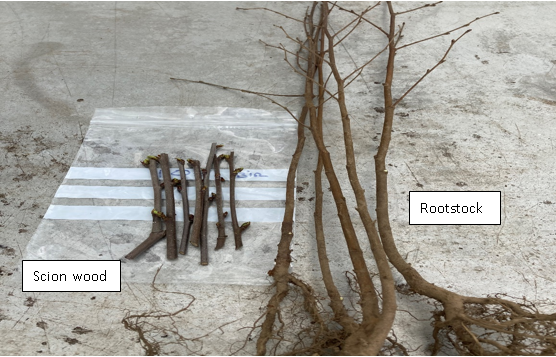 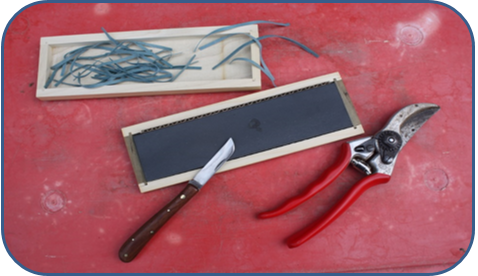 Wax for dipping the scion wood to below the graft cuts, to seal the cut surfaces and prevent moisture loss. It is a special paraffin based wax with a low melting point (650C) to avoid tender buds being damaged by very hot wax. A deep fat fryer is ideal for melting and controlling the temperature of the wax.

Methylated spirits used to sterilize the knife blade and secateurs

All grafts fall into two types

The range of grafting techniques is extensive but four of the more common methods used are described here.

This is probably one of the simplest grafts to make. Ideally the diameter of stock and scion should be matching. Only two cuts are required. Cut the rootstock back to within 10 cm approx. of the root collar. Make a slanted cut about 3 - 4 cm on the rootstock. Make a matching cut on the scion wood and match the two cuts together ensuring that the cambial layers of both stock and scion are in close proximity to one another. Tie using rubber strips and wax immediately. Suitable for birch, alder, ash, sycamore etc.

This graft is very similar to the first graft except an extra vertical cut is made into the scion and rootstock whip cuts, making it possible to interlock stock and scion with increased cambial contact. The use of this type of graft is ideal for field grafting. 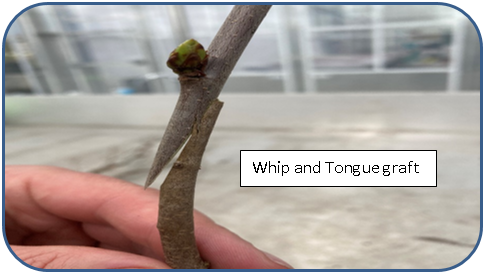 This graft can be used when the rootstock is thicker than the scion. This graft is suitable for birch, alder, ash, maple, sycamore etc.

This graft can also be used when the rootstock is thicker than the scion. This grafting method is mainly used on beech and on a range of conifers (Spruce, Pines, and Firs etc.) leaving the top of the rootstock intact for a period of time after grafting.

Successful grafting will depend on quality of the plant material (stock and scion), skill of the grafter and timing and aftercare of the grafts. The latter is just as important as the operation itself. Temperature is very important for good growth and callus formation. A temperature range between 15 and 250C is ideal. Temperatures below 100C and above 300C will result in callus formation to be slow and meagre. Depending on the species it can take 6 to 10 weeks for a successful graft union to take place. Removal of shoot growth below the graft union is essential so that the scion is not overgrown by the rootstock. Despite the many advances made in other vegetative propagation technologies such as micropropagation, misting units, fogging units etc., grafting is still an essential method of plant cloning for a wide range of tree species for use in forestry research.