Norway spruce is a European species native to most of central Europe but also occurs naturally as far east as Russia, south to the Pyrenees and north as far as Scandinavia. Liam Kelly, Forest Development Officer, Teagasc, Mullingar delights in outlining the benefits of his favourite conifer species

Norway spruce is Ireland's third most common conifer after Sitka spruce and lodgepole pine, covering a total area of over 25,770 hectares or almost 4% of the forest area (NFI 2017). It is thought to have been introduced to Ireland during the 1500s.

As a forester and forest adviser covering mainly the midlands my favourite conifer species is Norway spruce. Planting the right tree (be it conifer or broadleaf) in the right place is vital. One of the main conifer species planted in the midlands is Norway spruce, because it is less susceptible to spring and autumn frosts and can also tolerate a slightly higher pH range than Sitka spruce.

Norway spruce has dark green hard pointed needles and brown round buds. In comparison, Sitka spruce needles look dark blue-grey from a distance, are sharp at the tip making them prickly to touch. The cones of Norway spruce are 12 – 15 cm long and turn from green to brown in the autumn, while the Sitka spruce cones are about 5 – 10 cm long with wavy edged scales and feel soft when squeezed. The bark of Norway spruce is reddish brown, flaking into thin scales when young while the bark of Sitka spruce is dark purplish grey or brown and breaks into coarse irregular plates which falls away.

Norway spruce requires an adequate supply of soil moisture (annual rain fall of about 900mm). It grows well on grass–rush sites, as well as moist fertile soils including heavy clays and the more fertile shallow peats.

Unsuitable locations for Norway spruce include very dry sites, high alkaline soils, heather-covered sites and frost hollows. Exposed sites are also unsuitable as the foliage can suffer wind burn and the trees can be prone to crown die-back or windsnap following extreme wind events. The species has a relatively shallow root system which can leave it vulnerable to droughts or indeed windthrow when soils become waterlogged. Therefore attention to drainage is important in spruce plantations to improve rooting depth.

All planting of bare root trees should take place during winter and early spring and now is a good time to consider any tree planting. By and large, Norway spruce is an easy tree to establish. At planting, it’s ideal to use strong well balanced young plants of 20 – 40cm in height. Norway spruce grows slowly for the first 3 – 4 years after planting, but then it can put on very good growth which helps overcome most vegetation competition.

Under the current Afforestation Grant and Premium Scheme, Norway spruce qualifies as a diverse conifer species under Grant and Premium Category (GPC) 4 – as it’s an approved conifer species other than Sitka spruce or lodgepole pine. Consequently Norway spruce is a very significant species within the private sector with an increase in its planting in the 1990s and 2000s especially in the midland counties.

Norway spruce was traditionally used as a Christmas tree due to its natural conical shape. However, as the Christmas festive season was lengthened and trees were expected to stay up for longer plus the fact that central heating systems were added to most homes, the appeal of the species declined due to the shedding of its needles. Some traditionalists still like Norway spruce as their tree of choice at Christmas.  In the main, Norway spruce has been replaced by non-shed species such as Noble Fir.

Norway spruce in the landscape 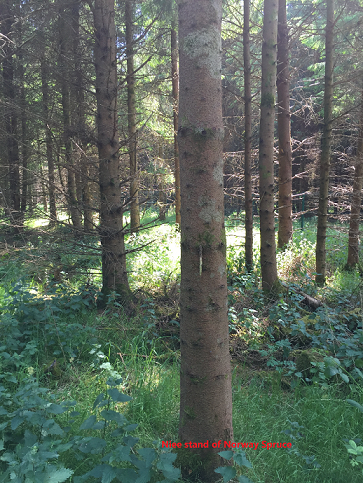 Norway spruce looks well as a mature tree or as a forest crop in the landscape due to its nice dark green foliage. It provides a very nice setting especially in any wood where recreation is important objective. Open shared spaces such as public forests and woodlands were never as important as noted through the current pandemic with the number of people out walking locally while practising social distancing. Compliance with current government guidelines on distance-from-home restrictions should be adhered to.

Where I walk recreationally in a local public wood, Norway spruce provides a nice contrast among all the blocks of broadleaves species that are in the wood. The distinction of the conifers versus broadleaves in winter is more pronounce as it provides some nice plumage, colour and shelter when other trees are bare. In Europe, Norway spruce grows as a natural mix with beech and silver fir, and in Scandinavia with Scots pine and birch.

Norway spruce is habitually slower to grow than Sitka spruce. Good forest management usually involves thinning to improve the crop and add to the biodiversity of the forest. Subject to growth rates and productivity, first thinning normally starts later than Sitka spruce - typically 18 plus years. Usually a line plus selection thinning is carried out initially (i.e. every 7th line maybe removed for access plus some selective tree removal from adjoining lines). Subsequent thinning is usually selective only, concentrating the growth on the best stems. Frequent and light thinning are normally recommended. On the better, more stable, sites high pruning could be carried out post first thinning on up to 500 stems/ha. The rotation length for Norway spruce is generally over 40 years.

Norway spruce is well known in the timber trade and is used extensively in the building industry as structural timber and for joinery purposes. Its wood is stable during changing humidity. The timber is relatively “white” and is therefore particularly favoured for boxes and packaging for foodstuffs. Norway spruce is easily worked and is said to give a better finish than Sitka spruce, although both timbers are classified as “white deal” in the timber trade. Lower grade material is used as pallet material, pulpwood or energy wood.

I believe that it is important to continue to plant trees and a range of species to ensure that future generations will continue to enjoy not only the recreational value, biodiversity, landscape and carbon sequestration value of trees and woodlands, but also the timber products that they can also continue to provide. Remember “keep on planting”!!