Andrew and Leonie Workman have been farming in Dunany since 1981.

For a number of years, they continued farming it as a tillage farm growing a wide range of crops. As the years went by with the increasing input costs of their farming system, the Workman’s felt it was not sustainable and began to look at at other options to improve the overall financial position of the farm.

After careful consideration and visiting other organic farms, the Workman’s decided to take the organic option. The farm entered organic conversion in 2004, with full organic status for the land and produce being achieved in 2006.

In the last thirteen years, there have been many changes made in relation to the crops being sown and the routes to market. Initially grain was grown and sold into the animal feed market. With fluctuating grain prices, they looked at other ways of selling grain. They decided to grow wheat and then rye and spelt for flour. This has now evolved into a family farm business where the Workman’s are growing, milling, packing and distributing their organic wheat, rye and spelt from their farm. Oats is also grown for the organic porridge market. 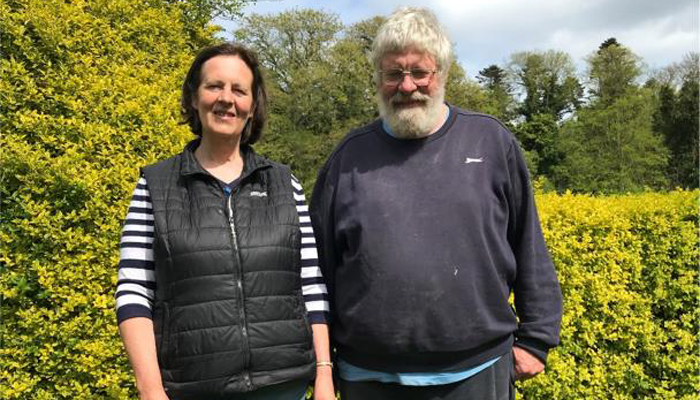 Outlined below in Table 1 are details of the land use and areas. 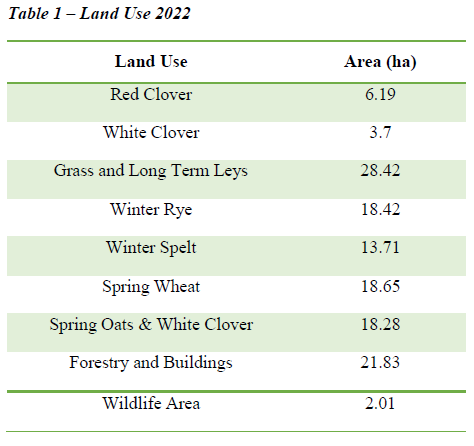 Currently on the farm, there is 69 hectares of land devoted to cereals. Following are details of crop varieties, sowing dates and seeding rates for the cereal crops on the farm.

The rye and spelt seed was bought in from Germany. The oat, clover and wheat seed was purchased in Ireland.

In organic cereal production, output is lower than conventional units but costs tend to be lower and prices for grain higher. 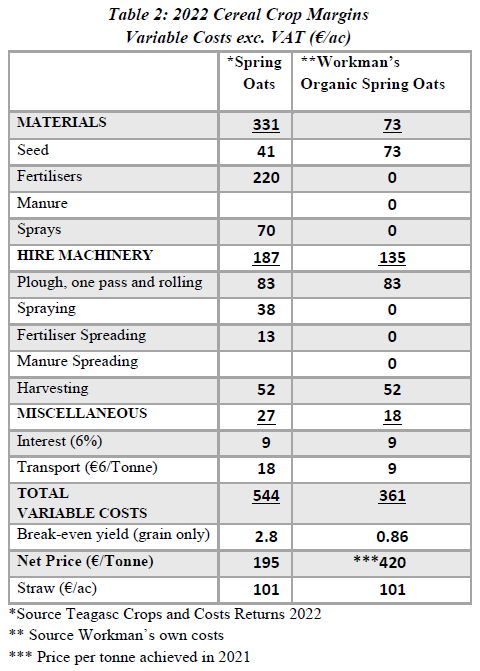 Clover on the Farm

Red clover is sown in a monoculture at the start of the rotation on the farm. It acts as a valuable break crop improving soil structure and fertility, limiting weed invasion and supplying organic matter. The Workman’s mulch it 2-3 times during the growing season. The variety of red clover on the farm is Kyrinna.

White clover is sown over with the spring oat crop; this will help improve soil fertility, soil structure and help suppress weeds. This is ploughed back when the next crop is being sown. The variety of white clover sown with this year’s spring oats is Jura at a rate of 2 kg/ac.

Crop rotation is a planned sequence of different crop types. Rotation is a key component of organic cereal production as it provides the principal mechanism to provide crop nutrients and is a major way to control pests/diseases along with maintaining and enhancing soil structure. Crop rotation also allows for spreading the fertility requirements and provides the capacity to build fertility.

The Workman’s have implemented a rotation of a two-year fertility-building phase with red clover followed by a five year cycle of cereals. This planned rotation may vary depending on soil type, weed burden and fertility. 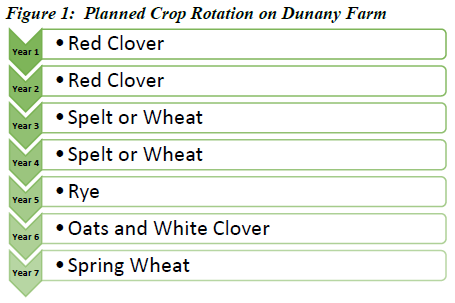 Soil P and K Level on the farm 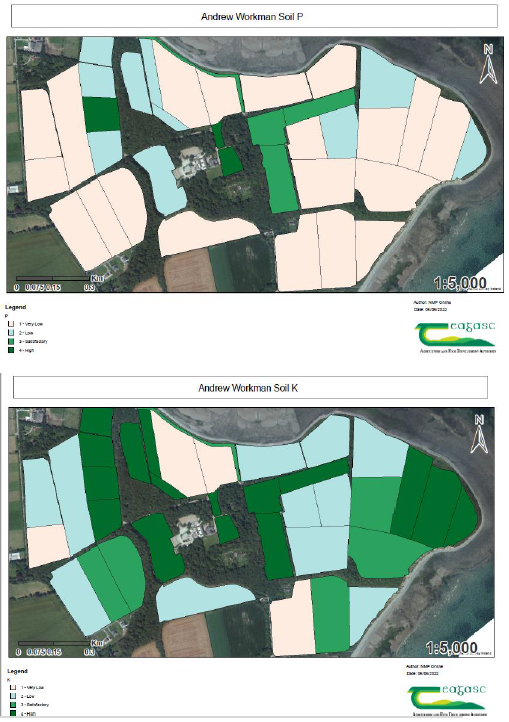 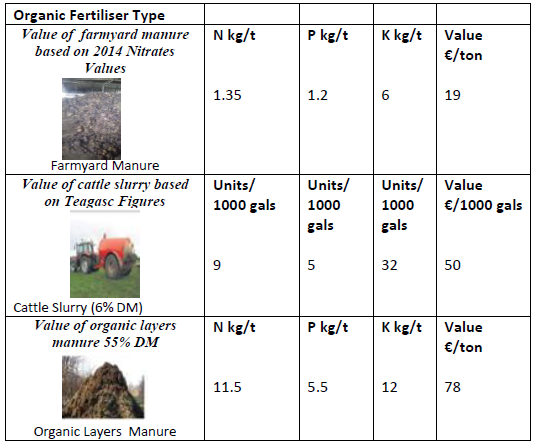 The Story of Dunany Organic Flour

The Workman’s looked at other ways of selling their grain and they realised that a way to do this, was to process it and value add themselves.

This is how it happened:

In the nearby town of Dunleer, there was Whiteriver Mill, a traditional stone water mill still in working order. With help of the mill owner, the Workman’s started milling, producing nutty traditional extra course flour from their wheat. This was sold locally and within a year, demand outstripped what the mill could produce.

They also began to see an opening in the market for other organic flours from grains such as rye and spelt. For this, they would need a faster more efficient milling system. By chance on their way home from their son’s wedding in Poland they happened to come across a French mill used by a German organic farmer. They bought it as it suited the volume of grain that they were producing on the farm.

Over time, they also have invested in grain cleaners, gravity separators and a de-huller, all of which were sourced second hand and are essential pieces of equipment required for producing clean weed free quality grain ready for milling.

With the flour selling very well locally the Workman has looked to expand their market now that they had greater capacity with the mill. This was done very simply by loading the car with samples and cold calling to wholefood stores, artisan bakeries and restaurants. They began to get great feedback and better return on their grains and the business has developed from there. They also recognised an opening in the market for other organic flours from other grains such as spelt and rye, which they then started to grow and process.

Their range of grains and flours come in various pack sizes of 500g to 5kg depending on the market it is for. The flours vary depending on the grains from wholemeal fine course or extra course, stoneground, plain sifted stoneground and spelt berries.

Their flours and berries are sold as follows:

The unique selling point of Dunany Flour is that the Workman family are able to see the grains through from sowing to harvesting, cleaning, milling, packaging and distribution. 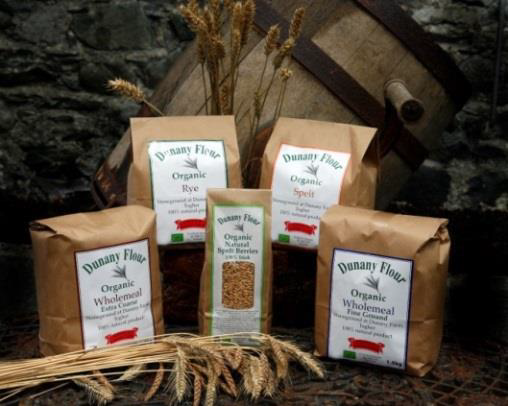 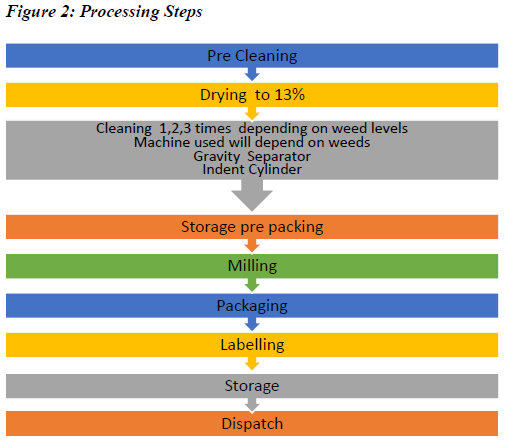 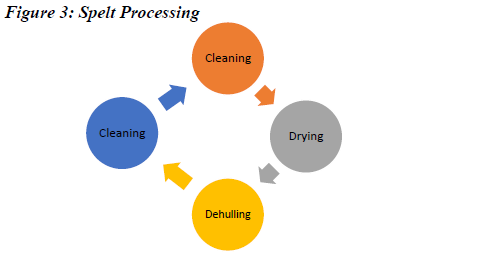 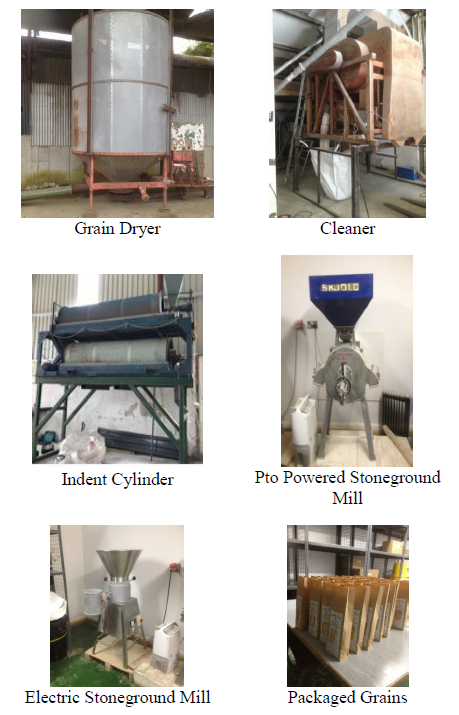 A major factor that distinguishes organic farming from other approaches to sustainable farming is the existence of internationally acknowledged standards and certification procedures. The standards for organic production within the European Union are defined and enshrined in law by Council Regulation EC 834/2007 as amended.

In Ireland the Department of Agriculture, Food and the Marine is the competent authority (i.e. - the Department’s Organic Unit is based at Johnstown Castle Estate Wexford) for regulating the organic sector and ensuring that the obligations and requirements of Council Regulation (EC) No. 834/2007 as amended and adhered to.

The Organic Unit of the Department of Agriculture, Food and the Marine have designated Official Certification Bodies whose role is to certify organic producers, farmers and processors through and inspection process of each individual’s unit or farm. Further information can be sourced from these organic certification bodies:

How to Apply
Online applications only through www.agfood.ie facility.