Welcome to the farm of Ross and Amy Jackson.

Prior to the farm being converted to organic production this was a tillage farm with predominantly barley, wheat, oats, oilseed rape and fodder beet being grown.

Ross’s brother Alan converted his farm to an organic system, Ross and Amy seeing how the system worked became very interested in organic farming as an option for themselves, they both liked the idea of reducing the amount of chemicals being used on the farm and also the challenge of an organic farming system; they also believed there was potential to increase the financial performance of the farm.

Amy has a degree in Environmental Management and completed her Green Cert in 2015 in neighbouring Gurteen Agricultural College, where she also works as College Secretary. She had previously enjoyed many years of working on farms with sheep and was very keen to farm sheep in an organic system when Ross suggested the idea back in 2015.

The farm entered conversion in 2015 with full organic status for the land and produce being achieved in 2017. On the farm today is a cereal enterprise of malting barley and oats, and a sheep enterprise of approx. 145 breeding females. 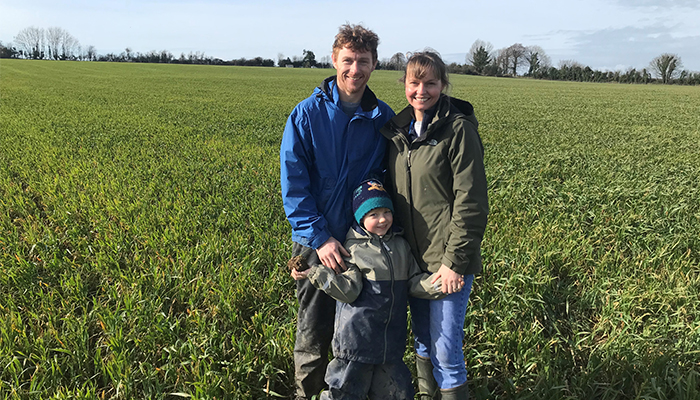 The holding is made up of one block of land all of which is owned. The total area farmed is ~ 50.5 hectares. 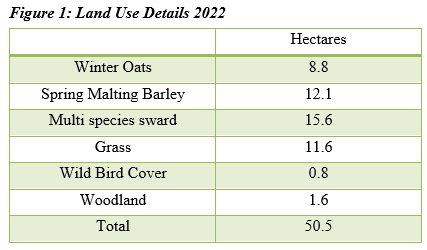 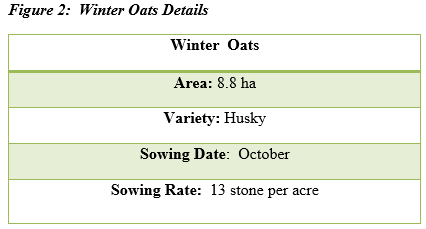 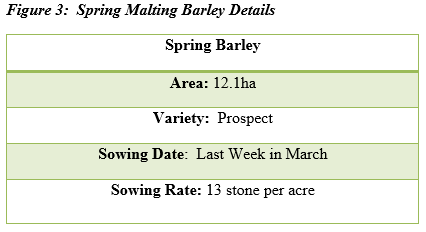 Crop rotation is the key to successful organic crop production. The rotation provides the principal mechanism to provide crop nutrients and is a major way to control pests/diseases along with a variety of other benefits.

The Jacksons plan will be implementing a rotation of a 3 to 4 year fertility-building phase followed with 3 to 4 years cereals and then back to multispecies sward. 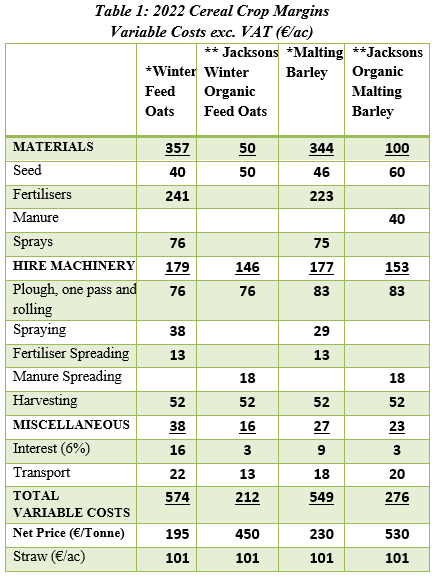 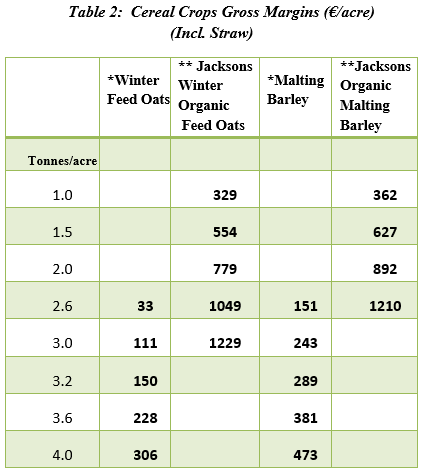 The expected yield for the winter oats would be between 2-2.5 tonnes per acre and the malting spring barley 2 tonnes or slightly over per acre.

Sources of Nutrients used on Farm

Soil Fertility on the Farm

Winter grazing forage crops are cold-hardy plants and can produce a thick palatable crop. They can be used as feed from October to February as part of an outdoor wintering system.

A multi species sward contains a diverse range of grasses, herbs and clovers. Its aim is to produce a well-balanced forage and not just large volumes of grass. Many of the species used are deep rooting and have the ability to unlock nutrients from deeper in the soil profile. The mixture does not demand high fertiliser inputs and is therefore ideally suited to organic farming. These leys provide increased levels of minerals and vitamins to livestock. Muli species swards also have the ability to naturally improve soil structure with their deep roots.

In 2021, a multi species mixture was sown - details of the seed mixture are outlined below. 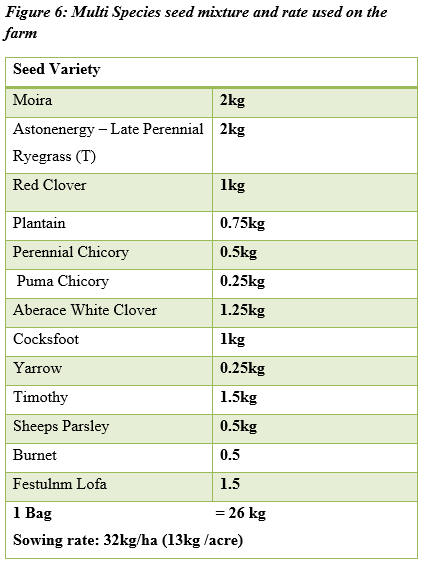 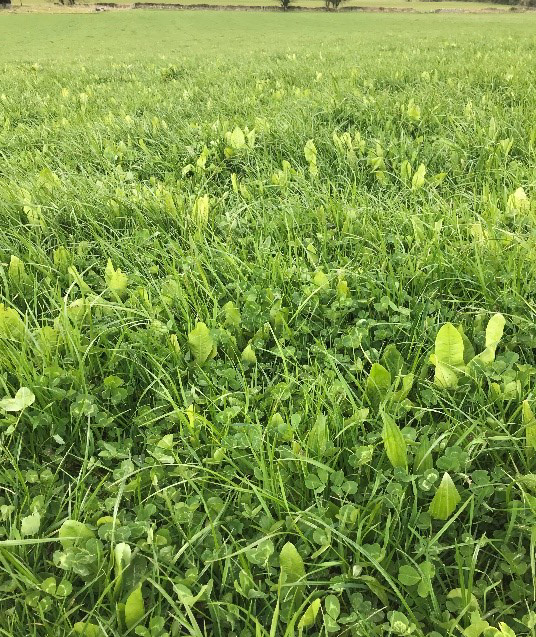 The opportunity to have a sheep enterprise on the farm arose when the decision was made to enter into organics, because all of a sudden there would be grass on the farm as part of the rotation for the tillage crops.

Ross grew up with sheep as his parents used to keep them, and Amy found her way onto sheep farms since her childhood - initially helping out at lambing time but then to helping out all year round for a number of years, until she moved from Northumberland to Ireland – so when Ross asked Amy in 2015 if she wanted to get “a handful of sheep”, she jumped at the chance.

The flock was established in 2015 with the purchase of 120 ewe lambs from three different organic farms (mainly Texel crosses, but also some Charollais crosses, some New Zealand Suffolk x Belclares, and some black faces).

The only sheep that are bought in are rams and occasional pure-bred females (for their sons).

This past breeding season, the Rouge Ram (5* maternal & 5* terminal) was let out a week ahead of any other rams, and he wore a yellow crayon so that when lambing started  Ross and Amy  knew to tag with breeding tags all female lambs born out of mothers with yellow backsides (as long as the lamb was a decent size, and fit and healthy) – this ensured that lambs were kept  by the right ram, and should translate into bigger (more mature) ewe lambs by mating season. After the first week, the crayon colour was changed, and the ewes were divided up into groups for single-sire mating (main benefits being that the rams do not have to work so hard and they do not compete with each other so there is less risk of injury).

Grazing Management on the Farm

Since 2015, all fields have been fenced into paddocks of a maximum area of 4 hectares – including the use of temporary electric fences used to maximise grass utilization and to make it easier to keep a clean supply of grass ahead of the lambs.

The sheep are grazed in rotation – ideally leaving fields closed for 3 weeks before re-grazing, and once the lambs are weaned there is a follower system whereby the ewes follow lambs.

Topping is carried out if necessary (although the aim is to avoid this on multi species swards).

Winter feed for late finishing lambs is grass and cover crops, (plus silage and a mix of home-grown barley and oats if they need it) - ideally lambs are gone by December and so this extra feeding is avoided or minimised when that is the case.

Winter feed for ewes is cover crops supplemented with silage to provide extra forage but also to get them used to the silage before being housed. Once housed they are on silage plus a bought-in organic high protein ration (19%).

After lambing, ewes are fed a mix of our own barley and oats for at least two weeks post lambing.

The area harvested for silage is rotated around the farm depending on growth and utilisation, with grazing areas taken out for silage that have excess grass covers.

Red clover grass silage was made in 2016 and 2017, and a red clover grass sward has been just sown now in 2022. The plan is to take two cuts of silage this year and three cuts in subsequent years.

The majority of lambs are sold from mid- June to mid-December (in small numbers at the start and finish).

Some lambs are sold through the Offaly Quality Lamb Producer Group to Irish Country Meats (ICM) based in Camolin Co Wexford (in which case the aim is to meet their maximum (paid) carcass weight of 20-23kg depending on the time of year), and some are sold directly to “Lacka Organic Lamb” customers in which case the Jacksons aim for a slightly higher carcass weight. 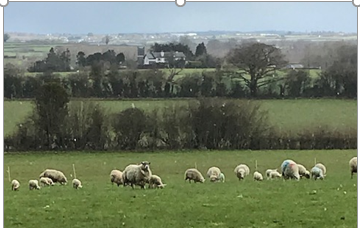 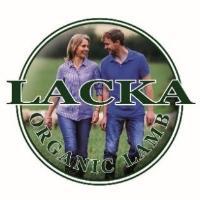 In 2020, Ross and Amy decided to make their lamb available to the general public, through the sale of ‘freshly frozen’ whole or half lambs (butchered into roasts and chops) through a box scheme.

Lambs are brought to a local abbatoir and meat is hung for up to 8 days before being crafted into chops and roasts by their experienced butchers, in accordance with customer preferences.

Orders can then either be collected from the farm (when ready) or can be sent to customers by courier (nationwide delivery, Ireland, UK, and France).

The lamb is a seasonal product, usually available (by pre-order) from July to January. Customers are encouraged to order well in advance, and this allows us to ensure we keep back lambs for them so that the carcass weight will be a little larger than those we send to the factory (a butchers lamb, rather than a factory lamb).

Withdrawal Periods for use of Veterinary Products

All withdrawal periods shall be doubled.

Animal Health on the Farm

The switch to organics has not lead to any adverse effects with regard to animal health on the farm.

A closed sheep flock is operated as much as is possible to help minimise disease risks.

Faecal analyses are taken to assess the level and identify the type of internal parasites if present.

The Organic Farming scheme opened on February 9th 2022 for new applications and it will close on April 8th 2022.

There are two new rule changes introduced for the 2022 scheme;

Steps for Applying for the 2022 OFS

How to Apply and Closing Date:
Online applications only through www.agfood.ie facility.