Ash dieback is caused by an invasive fungal pathogen; Hymenoscyphus fraxineus (formerly known as Chalara fraxinea). It arrived in Europe from Asia in the early 1990s and was first recorded in Ireland in 2012. Dheeraj Rathore, Teagasc Forestry researcher outlines common signs of possible ash dieback

Photo above: Typical ash dieback disease symptoms on leaves and branches of a young tree (June 2021)

In Teagasc, research on breeding for disease tolerance in ash began in 2015. Results to-date indicate that around 15% of ash trees in our tolerant genotype collection display higher levels of tolerance to the pathogen. One of our current research focus area is to monitor and assess surviving healthy ash trees in Ireland, and to include them in the disease-screening programme. This is facilitated by distinguishing between healthy and diseased ash trees in our hedgerows and woodlands.

The signs of ash dieback are easy to spot during the summer when trees are in full leaf. Ash trees develop leaves at different times in the spring, some trees will flush as late as the end of May, but almost all healthy ash trees should be in full leaf by mid-June. Some affected ash trees will fail to flush and develop leaves at all, while others will flush normally before showing signs of dieback later. It is important to note that signs such as failure to flush or crown/branch dieback in ash might be a result of several causes. Therefore an unhealthy looking ash tree does not inevitably mean it is affected with ash dieback disease. 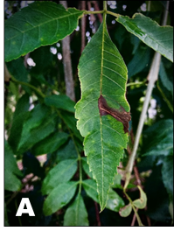 A. Spots on the leaves: The first signs of an ash dieback infection usually include the development of dark brown orange lesions/spots on the leaves. These indicate the locations where fungal spore have landed prior to advancement of the disease. 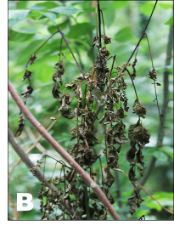 B. Wilted leaves: Wilting of leaves is the sign of disease progression of from the site of infection on leaves where initial spots appeared. Brown hanging leaves are more advanced signs of ash dieback during the summer months. 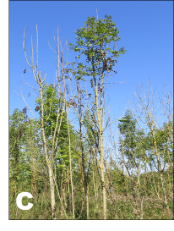 C. Branches losing their leaves and ‘dying back’: Brown necrotic leaves eventually die and often shed early. During summer months, the infection can cause small dry necrotic spots to appear on the stem/branches of ash trees causing premature shedding of leaves as Indicative of further disease progression. Ash trees suffering from the disease can also show signs of progressive leaf loss, leading in the death of the tree. 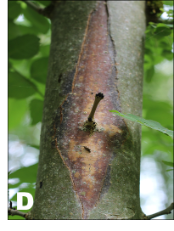 D. Dark patches, called lesions, on the branches and/or trunk: The fungus progressively grows down through leaf petiole/rachis into the woody parts of the tree causing dark brown, distinctive diamond or lens-shaped lesions. These necrotic lesions (wounds surrounded by dead tissue) can eventually encircle the branch/main stem of the tree affecting the bark and underlying tissues. Peeling of bark can often reveal brown-grey discolouration on the inside too. These lesions can grow further to become perennial cankers. In some cases, cankers can encircle a stem, cutting off its nutrient supply and causing it to die within a single season. 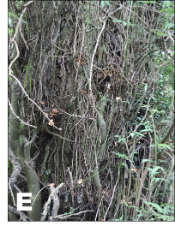 E. Epicormic growth on main trunk and /or branches: Severely infected trees will not flush or flower as normal in spring. Often in such cases, new shoots/sprouts may grow from previously dormant buds further down the trunk, becoming easily visible to the eye. This development is known as epicormic growth and is a common response to stress in trees which are struggling for life. Epicormic growth is one of the key symptoms of ash dieback disease

While ash dieback disease is easily observed in young tress and can kill them quickly, it can be harder to recognise in more mature trees which often can tolerate infection for several years. Unfortunately, trees weakened by ash dieback can invariably become susceptible to a range of other fungal/bacterial diseases, opportunistic pests and/or abiotic stress. Dark stem lesions may therefore be a attributed to agents other than ash dieback.

For more information about ash dieback and Teagasc research focusing on developing ash trees with disease tolerance, see our dedicated articles and videos at the following links: 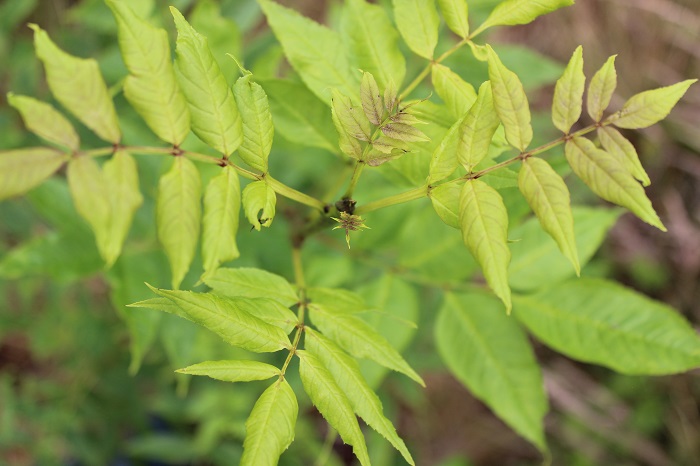