Do you have a Ditch, a Gripe, a Sheough or a Marein on your farm? You must avoid contaminants such as nutrients and pesticides from entering these ditches to protect water quality in the receiving streams. Read more from researchers Karen Daly and Owen Fenton

On a walk across an Irish landscape you might encounter a Ditch, a Gripe, a Sheough or a Marein Drain, which are all colloquial names for a surface open drain. These open ditches are multi-functional and transport water from rainfall, springs, groundwater and in-field pipe or mole discharges to different degrees depending on landscape position and time of year. Drainage systems have been a feature of the Irish agriculture for many years and some date back to the 1940s.  After the Second World War the Department of Agriculture launched The Land Project in 1949, which ran until 1976 with the sole purpose of improving land drainage for food production.  In the West of Ireland soils were deemed so ‘poor’ with impeded drainage that surveyors at the time remarked that it would be ‘extremely difficult to find a cure for these problems’.  The ‘cure’ took the form of networks of in-field shallow or deep drains coupled with surface open ditches that define much of the Irish agricultural landscape around us today. Johnstown Castle Environment researchers Karen Daly and Owen Fenton are doing some research on the connectivity of these complex systems to surface waters.

On many farms, you’ll find a complex network of field drains connecting with a surface open ditch network, possibly discharging directly to surface waters or connected to a drainage outlet.   Traditionally in-field drains and surface open ditches were seen as a fully connected system installed with great effort to quickly remove excess water off the farm. Since The Land Project, we’ve learned a lot about water movement across the landscape, specifically what it can carry with it, for example, nutrients, pesticides and sediment that can be detrimental to water quality when connected surface open ditch water finds its way to a waterbody.  To protect water quality we need to understand what are the connections and corridors for water movement on the farm that might bring pollutants with it, and in this article we describe different types of surface open ditches , what they do, and ask ‘when is a ditch not a ditch’?

We surveyed 10 locations in Ireland and walked the surface ditch networks across 10 farms ranging in size from 29-255 ha. We found no clear relationship between the size of a farm (ha) and the extent of its ditch network largely because drainage systems are generally ad-hoc and focus on drainage problems which have occurred over time, and depend on local landscape and meteorological conditions. However, we found that ditches occurred more frequently in low-lying areas prone to waterlogging as a result of low permeability soils or where the water table is shallow.  Surface ditches typically occur as boundary ditches between fields on the farm that are connected at an outflow and can carry water directly to a stream or river. In some cases, these can also drain across the farm boundary through neighbouring land.  These ‘connected’ ditches serve to prevent waterlogging, however, if we can avoid contaminants such as nutrients and pesticides from entering these ditches, water quality in the receiving streams will be protected. 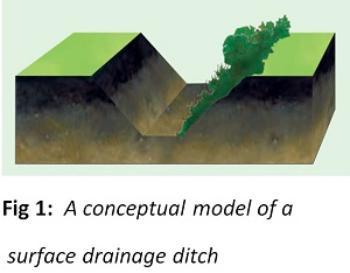 Another feature of ditch networks we encountered were secondary ditches flowing perpendicular to the slope of the land connecting two larger ditches. These also occur as an open ditch running through the middle of a field to collect excess surface water.  Secondary ditches will connect up to the overall ditch network that is connected to an outlet or stream.  Finally, we found a few examples of ditches that were not connected to anything, leading us to ask is this really a ditch? Nonetheless, some of examples of the types of ditches we encounter are shown here.

Fig 2: Some examples of boundary ditches, in-field ditches (disconnected) and an outflow ditch bringing water off the farm to a stream.