Headlands make up a large proportion of a field. Headlands often display the greatest variation in fertiliser application.Dermot Forristal outlines why is it important to spread fertiliser evenly on headlands?

While some spreaders have spreading patterns that can spread headlands more evenly than others, two factors contribute to the risk of uneven spreading:

To spread evenly to the field edge, the spreading pattern on the edge side must be radically altered from the normal wide-overlapping pattern to an abrupt non-overlapped ‘box-shaped’ pattern at the field edge.  This is achieved by either altering/changing:

Because there is no overlap at this side, the spread pattern is more susceptible to wind, spreader angle, fertiliser quality, etc.  Consequently they need to be set/adjusted very carefully to ensure they are spreading accurately.  Some spreaders which are very easy to set-up for in-field setting require quite a bit of checking on the field headland, and they often don’t receive that attention!   The edge pattern can also be adjusted to avoid any fertiliser passing the boundary if there is a water-course nearby or, alternatively, to maximise yield to the field edge.  The key to setting the headland components correctly is to consult the manufacturers resources, whether on-line, or the instruction manual.  The edge pattern can also be checked using test trays.

Achieving the correct positions for turning on and off the spreader, to allow it match the in-field and headland pattern, is vital to avoid over- and under- spreading.  Teagasc research has shown position errors on farms of from 1 to 12m.  The biggest challenge is determining the ‘turn-on’ point when moving away from the field headland, as modern wide-spreading spreaders with good overlapped patterns spread quite a distance back from the machine.   For some machines with a 24m bout width for example, the correct ‘on’ position may be 26m from the headland tramline.  This is very difficult to judge from the tractor seat while travelling at speed. It’s important to:

Attention to detail in all of these areas will improve yields, fertiliser use efficiency and reduce the risk of crop lodging. 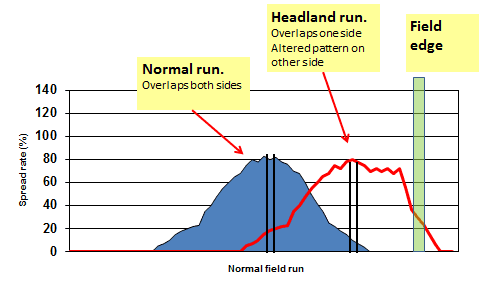