A Chemical Method to Distinguish Between Silver birch & Downy birch

Silver birch (Betula pendula Roth) and downy birch (Betula pubescens Ehrh.) are two tree-like birches that occur naturally throughout most of Europe and are some of the most important forestry broadleaved species in the Nordic and Baltic States. Apart from their economic value they are valued for their biodiversity importance also. Both birches are native to Ireland and being pioneer species occur naturally throughout the country. There has been an interest in birch for many years and mainly for ecological reasons, but in more recent times there has been more of a focus towards their economic benefits. The birches produce a light coloured timber that can be used to make furniture, high quality pulp, sawlog and veneer. In Finland, cellulose material is manufactured from birch, fibres are then spun into yarn and turned into fabric to make clothes.

The general appearance of both birches is very similar, they are both white-stemmed and can reach a height of 24 – 30 m. Very often both species can be found growing in mixed stands despite their site requirements and yield potential differences and requiring different management regimes. Silver birch grows best on well-aerated fertile soils, light mineral soils and sandy soils. They dislike compacted, water-logged, infertile soils and on these sites growth is poor. Downy birch can tolerate a wider range of soil types and will survive on wet peat lands. Differences exist also in the morphology of the leaves, twigs, bark, seed and catkin scales. They also differ in chromosome numbers, silver birch is a diploid species with 2n = 28 while downy birch is tetraploid with 2n = 56. The two species can co-exist together and are capable of hybridizing, but hybrids are considered to be rare due to a biochemical incompatibility mechanism between the two species.

Morphological differences between silver birch and downy birch can sometimes be difficult to distinguish, particularly in the case of downy birch having sometimes similar and highly variable morphological characteristics. The two species have different yield potential and because they require different management regimes it is imperative that they can be identified to assist in the management of the plantations and maximize quality timber production.

Methods to distinguish between the two species, other than relying on morphological differences are often used, the most reliable being chromosome counting, but this method can be very time consuming and very often trying to get suitable material for testing can be difficult.

To prepare the reagent solution, 0.4 g of 2, 4 – dinitrophenylhydrazine is dissolved in 100 mL of 2 M hydrochloric acid, forming a clear yellow solution.

Shoots were collected from the Teagasc collection of birch plus trees (silver and downy), 100 – 200 mg of inner bark was removed from the shoots of each genotype and placed in 10 mL tube containing 2 mL of the reagent solution.

The tubes were kept at room temperature and inspected after one hour to determine if an orange 2, 4 – dinitrophenylhydrazone precipitate had formed. Notably, all the samples with a high platyphylloside content (>5 mg/g) gave orange precipitate along with the colour of the solution changing from clear yellow to cloudy orange, were determined to be silver birch, while on the other hand, the samples with very low platyphylloside content did not form an orange precipitate, the solution remaining a clear yellow colour, were determined to be downy birch. 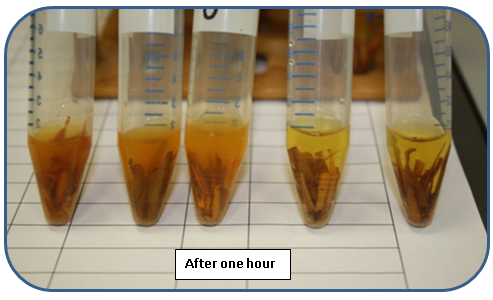 The use of this method is easier, quicker and cheaper than chromosome counting and more reliable than morphological characteristics for species determination.

Read more about birch in the Birch Improvement Programme