Martyna Lagoda, PhD student working on the SOWWEANWEL project, gives us an update on her research looking at the effects of chronic stress during pregnancy on sow welfare, reproductive performance, & on the resilience of offspring to stress.

Suboptimal housing and management pose many welfare threats which induce chronic stress in sows. When experienced during gestation, chronic stress also has detrimental consequences for the stress-coping ability, behaviour and immune function of piglets. This is known as prenatal stress. Its negative implications for offspring resilience are a major driver of antibiotic use in those animals, contributing to antimicrobial resistance development. Hence, tackling sow chronic stress via improvements to her welfare can be beneficial for offspring productivity and resilience, with a range of positive knock-on effects.

The two final studies of the SowWeanWel project aimed to:

Aim 1 - Risk factors for chronic stress in sows housed in groups, and associated risks of prenatal stress in their offspring

Literature was reviewed to assess the potential of a range of factors to contribute to chronic stress in pregnant sows. Factors identified were associated with the physical and social aspects of sow gestational environments, as well as with individual sow characteristics, and included

As chronic stress is of detriment to the developing offspring, the mechanisms of action of both chronic and prenatal stress were also discussed in the literature review.

This study took place on a commercial 2000-sow farrow to finish farm. Sows (n = 240, 6 replicates) were mixed into stable groups of 20 unfamiliar animals on day 30 post-service in group pens with free-access, full-length individual feeding/lying stalls. CONTROL (n = 120) pens had fully-slatted, concrete floors, two blocks of wood and two chains suspended within the group area. IMPROVED (n = 120) pens were the same, but with rubber mats, a length of manila rope in each feeding stall, and straw provided in three racks (Figure 1). Levels of sow oral stereotypies and aggression were observed 72hr post-mixing, in mid and late pregnancy. Skin lesions were counted 24hr post-mixing, 3 weeks post-mixing and in late pregnancy, and locomotion was scored on entry to gestation housing (day 30 post-service), in mid and late pregnancy. Saliva was collected from each sow on day 79 of gestation and used for analysis of haptoglobin (inflammation marker). Tear staining around the sows’ eyes (chronic stress indicator) was scored in late pregnancy, in mid lactation and at weaning. Reproductive performance was recorded at farrowing, along with birth weights, vitality and IUGR scores of piglets. Finally, the presence of scour was scored in the farrowing crates approximately every second day throughout lactation. 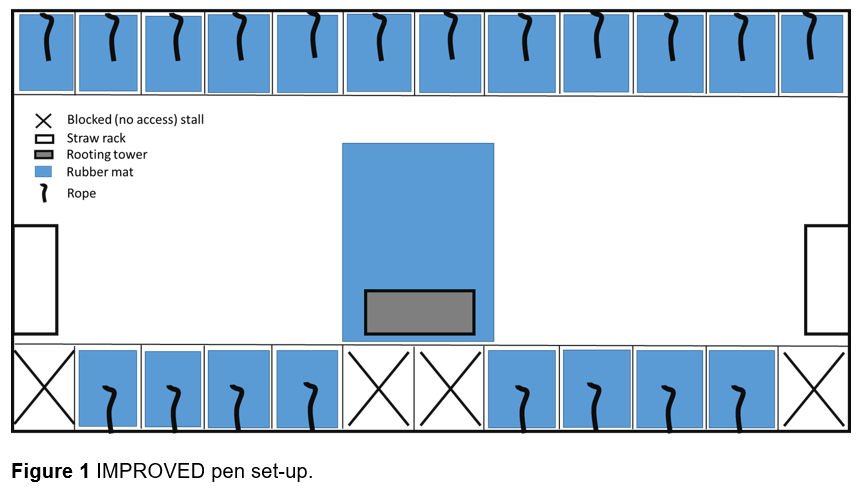 Find out more about the SowWeanWel project